German prosecutors said Wednesday they have filed charges against a former SS soldier for incitement and disparaging the memory of Nazi victims, after the 96-year-old made inflammatory remarks in an interview broadcast on television.

The accused was not named by prosecutors but he is understood to be Karl Münter, who had previously been convicted in France over his role in the killing of 86 people in the northern French village of Ascq during World War II. 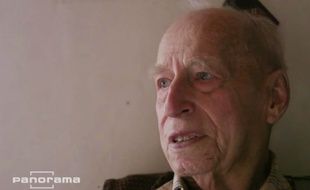 Münter told journalists in an interview broadcast by German channel ARD last November that those killed in Ascq were themselves to blame for their deaths.

He also disputed the fact that the Holocaust claimed the lives of six million Jews.

"The accused did not dispute giving the information to journalists but he said he did not know that the interview was recorded and would be later broadcast," prosecutors from Lower Saxony said in a statement.

"He also did not view his statements as incitement and therefore thought he would not be liable to prosecution."

If convicted, the accused faces up to five years in jail for incitement and two years for disparaging the memory of the deceased.

Münter was 21-years-old and a member of the "Hitler Youth" SS division on the night of April 1, 1944, when a train carrying some 50 soldiers of the division was slightly derailed by an explosion in an act of sabotage by the Resistance.

The troops took revenge by shooting dead 86 men in the nearby village of Ascq, the youngest of whom was 15 years old.

Münter has already had several run-ins with the courts over his past in the SS.

He was sentenced to death in absentia by a French military tribunal in 1949 for his role in the Ascq mass killing but was pardoned in 1955 as part of French-German reconciliation efforts after World War II.

German prosecutors had sought to reopen the war crime case on his home soil but dropped the case against him in March last year because of his prior conviction in France -- under a legal principle known as double jeopardy.
---
https://www.thelocal.de/20190724/german ... yaJN5EOSIE

The Jewed media outlet ARD which reported his words should have been accused of "incitement" for publishing Herr Munter's words. They could have easily deleted the statements before broadcast but chose to air them instead.

In any event, it appears Karl Munter served and even now comports himself honorably. I'm wondering if there's a way to help him. His Jewish overlords in Germany seem to want their pound of flesh out of him no matter his advanced age. Those overlords ought to consider that what precedents they set in their persecution of us will not be forgotten if the shoe ever returns to the other foot. This includes the ex post facto based laws used to give jurisdiction for the "trials" at Nuremburg in the late 1940s.
Activism materials available! ===> Contact me via PM to obtain quantities of the "Send Them Back", "NA Health Warning #1 +#2+#3" stickers, and any fliers listed in the Alliance website's flier webpage.
Top

I've noticed that President Ronald Reagan has had some negative press happening.
I'm wondering because of this •••
https://www.youtube.com/watch?v=cSbBh3Q ... mlrCofbV2Q
It's not diversity, it's displacement.
Top
Post Reply
3 posts • Page 1 of 1