Respect for all members from Serbia small country in Southeast Europe.

For many years I was a Creator and my first introduction to racial religion is Creativity.
Later, after many years, I started to more interested for Cosmoteism.
First, because I was more experienced in life and because I could not deny the existence of a Creator/God.
So I begin my journey towards Cosmotheism.
I am not a scientist or professor, just an ordinary worker. But an honorable Aryan who loves his race.

Greetings brothers across the ocean

You seem really sincere, and I respect your effort to write in English even though it's obviously not your first language. Thanks for joining the forum!

Please join our organization, the National Alliance, if you are eligible and willing to fight alongside us.
H0216
Top

Greetings to you!
-Frey🌿
Top

Welcome! Thank you for posting your introduction. Ah you were a creator first, that makes sense. I am not a professor or a scientist either, just a mom.

Welcome! I was looking at Creativity too, until I found Cosmotheism. I already had Cosmotheist beliefs for years before I was even looking at joining any pro-White groups, and Cosmotheism makes more sense to me.

If you haven't already, you should get the book: https://cosmotheistchurch.org/product/c ... am-pierce/
Top

It should be noted here that the National Alliance does have and accepts qualified members into our ranks regardless of location. Yes, even from Serbia. Our qualifications for member applicants are filled out at the following: https://www.natall.com/about/what-we-believe/ and are spelled out as seen below:


Eligibility: Any White person (a non-Jewish person of wholly European ancestry) of good character and at least 18 years of age who accepts as his own the goals of the National Alliance and who is willing to support the program described in What is the National Alliance? may apply for membership.

Ineligible persons: No homosexual or bisexual person, no person actively addicted to alcohol or to an illegal drug, no person with a non-White spouse or a non-White dependent, and, except in extraordinary circumstances, no person currently confined in a penal institution may be a member. (The National Alliance does not advocate any illegal activity and expects its members to conduct themselves accordingly.)

As you can see, geographical location is not mentioned as either a qualifier or disqualifier. From time to time, National Alliance members may encounter Whites not from the United States who believe we are an American organization. While it is true we are organized under American laws, we don't bar qualified Whites from our ranks and don't consider ourselves an American organization strictly confined to Whites living here. Someday it will come to pass that the United States ceases to exist and it is our expectation to survive that event whenever that day arrives.
Activism materials available! ===> Contact me via PM to obtain quantities of the "Send Them Back", "NA Health Warning #1 +#2+#3" stickers, and any fliers listed in the Alliance website's flier webpage.
Top

Special thank you for the invitation to National Alliance

I am interested for membership and I will send a letter soon and also buy a book Cosmotheism: Religion of the Future.
I not good at English, but l manage and use a dictionary. And there are many books in my language. I reading now 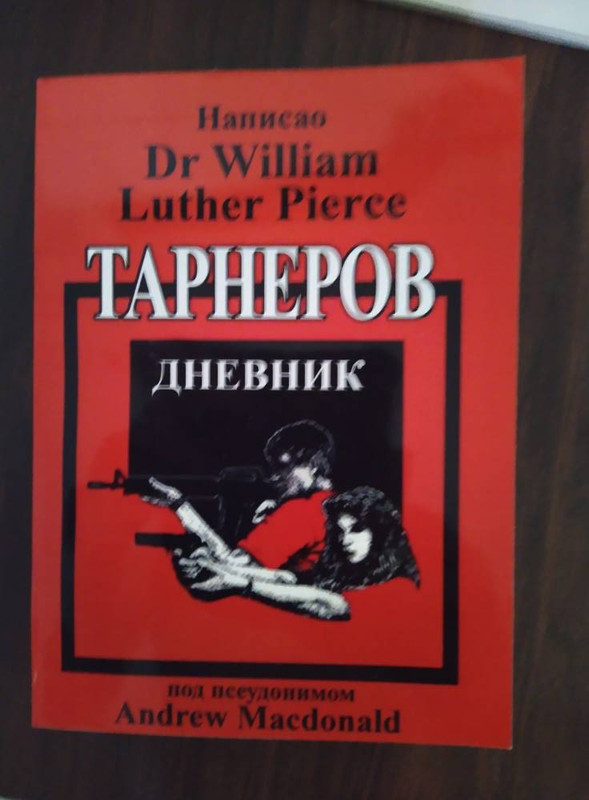 Greetings, and welcome to the White Biocentrism site, WolfHammer. It's great to have you aboard, and it is always an honor when one of our European brethren joins our ranks. I know a little bit about the Serbian people, who are among the most racially-conscious on the great continent of Europe.

In my previous life, going back a few years, I worked at a huge automotive and truck manufacturing plant (I'll not name the manufacturer), where I was the Training and Development Manager. The manufacturing plant was situated on the far, far southeast side of Chicago, Illinois, in an old ethnic neighborhood named Hegewisch. It was a predominately Serbian neighborhood with a smattering of Polish people and even a few Croatians. I was always impressed at how neat, clean, and tidy the Serbian folks kept that neighborhood, which was probably about 100 years old. It was a far cry from the surrounding communities, which were inhabited by our enemies--subhuman negroes and illegal alien mestizos, with both species having long ago absolutely destroyed their neighborhoods, turning them from White European ethnic enclaves into crime-ridden, decaying, decomposing, third-world Section 8 ghetto hellholes.

I've long ago moved away from that area, relocating to the 100% White, peaceful, rural, bucolic sanity of the Confederacy, in the Appalachian Mountains of North Carolina.

To this day I still keep in touch with a few friends from that area, although due to forced multiculturalism, integration, and neighborhood "block busting," they've moved to safer, greener pastures in northwest and north-central Indiana. One of the Instructors I hired, a great educator and a brilliant man in a number of disciplines, is full-blooded Serbian. I talk to him quite often. A better friend one could not have.

Again, welcome to the White Biocentrism site. I know you're going to enjoy the book, "The Turner Diaries," by Andrew Macdonald (the penname of Dr. William Pierce). I've read the book twice and, after finishing it both times, I've wondered aloud if the former nation of "America" wouldn't be much better served if the story line in the book actually happened in real life. I strongly believe that this failed nation that was once-upon-a-time known as "America" would receive its deserved comeuppance if the story that is told in The Turner Diaries really did happen--and sooner rather than later.
Any White person who can see the threat to the future of the White race today and who refuses, whether from cowardice or selfishness, to stand up for his/her people does not deserve to be counted among them.
Top

In Serbia always talk about the successes of Serbs who immigrated to America during Yugoslavia. It strange to me how many Serbs there are in various fields of science.
Otherwise, the Serbs are a nation that is slowly disappearing. Every year we lose about 70-80 thousand people this is a lot for Serbia.
Mortality rate is high, Few are born...
Im glad to be on a forum where there are a lot of smart and brave people.
He loves truth, and he hates falsehood.
He loves beauty, and he hates ugliness.
He loves nobility in all things, and he hates baseness. - The Path, Cosmotheism Triology
Top

In Serbia always talk about the successes of Serbs who immigrated to America during Yugoslavia. It strange to me how many Serbs there are in various fields of science.
Otherwise, the Serbs are a nation that is slowly disappearing. Every year we lose about 70-80 thousand people this is a lot for Serbia.
Mortality rate is high, Few are born...
Im glad to be on a forum where there are a lot of smart and brave people.

America suffers from the same predicament, in that our White population is aging rapidly as the mean age of our White population continues to shift upward; and, due to a number of factors, the White birth rate is below the minimum replacement rate of 2.1 children per White family, which would be needed just to keep the White race in America from shrinking in the overall percentage of population for the nation. At one time not too awful long ago--during my lifetime--I recall that the White race in America made up over 90% of the population; and now, in calendar year 2022, we White people make up approximately 59% of the aggregate population.

Some so-called "experts"--because I don't think that there are but a small handful of experts in the field of demographics--have made the claim that by calendar year 2040 the White race in America will no longer be a majority. Should that happen, and we have not yet destroyed the "jew problem" by calendar year 2040, the feral, simian niggers and the mud races would turn on us with retribution, much as the niggers have turned on our White sisters and brothers in South Africa and Rhodesia. I know that we would defeat them in armed conflict, but it would be extremely bloody and very violent. History is an excellent teacher and educator, and it has shown that the greater the hatred between the two warring factions in an armed racial conflict, the more violent, bloody, and gruesome are the wars.

Thanks, and know that you are also counted among the "smart and brave people" on the White Biocentrism site.

There is nothing at all wrong with your command of the English language; it is actually quite good. Your English is better than many native Americans who routinely butcher and destroy the English language; some of them speak and write English horrifically, and even mutilate it to the point of it being almost indecipherable and unreadable. Just keep doing what you've been doing; it takes time and patience to learn a language that is not your native tongue.

Take care, WolfHammer, and have a very White remainder of the week and an even Whiter weekend.
Any White person who can see the threat to the future of the White race today and who refuses, whether from cowardice or selfishness, to stand up for his/her people does not deserve to be counted among them.
Top
Post Reply
11 posts

Return to “Introduce Yourself!”