Things are coming to a head all over with unwanted racial integration.
---

Initially uploaded on Facebook on Monday, the three-minute clip has circulated various media channels before the aggressor was identified as Jonathan Pentland, a 42-year-old U.S. Army sergeant in Columbia, S.C. Pentland has since been charged with third-degree assault, Washington Post reports.

In the video, Pentland pushes, threatens, and verbally assaults a black man and attempts to force him to leave the area. The man, identified as Deandre, also lives in the neighborhood. 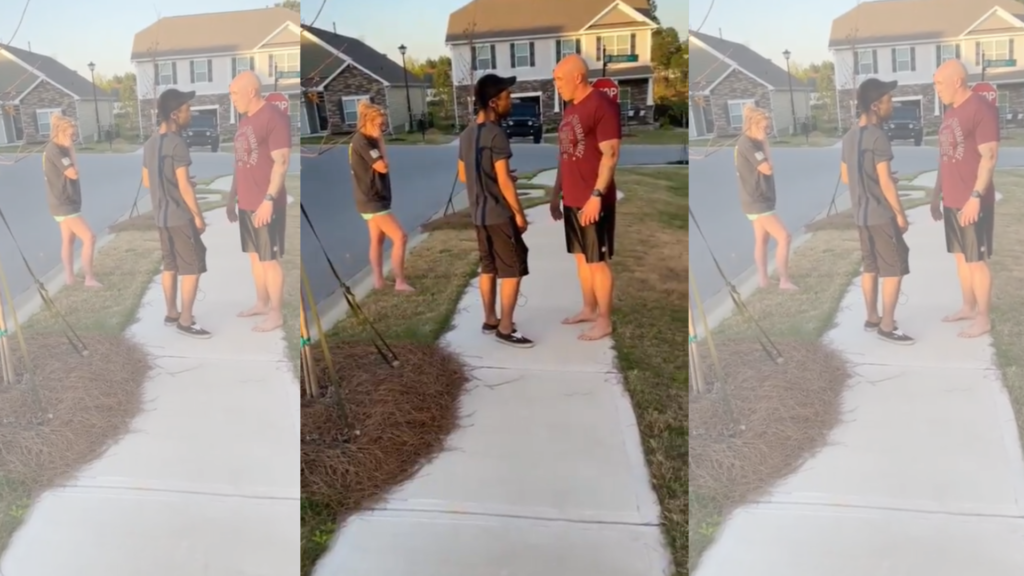 “Go away right now,” Pentland said to Deandre in the video. “What is it that you are doing here?”

Deandre tells Pentland to “call the police,” and a woman identified as Pentland’s wife responds, “they’ve already been called.”...
---

Pentland clearly did not know that Blacks are a protected class and he's not allowed to confront one, even one that is stalking around his neighborhood and harassing young women. Well, now he knows.

Also, what do you say to your wife who's cell phone video is used as evidence in your own arrest?

During an afternoon news conference, Sheriff Leon Lott said the other man in the video wasn't a juvenile but declined to release his name. [SPECIAL PROTECTED CLASS PRIVILEGE HERE] Lott said that man had been involved in other incidents in the neighborhood in the days leading up to the video but said that "none of them justified the assault that occurred."

"The first time I saw the video, it was terrible. It was unnecessary," Lott said, noting he had met with community leaders and elected officials before speaking with reporters. Lott said his investigators had turned their case over to prosecutors, who determined what charge to levy against Pentland.

Pentland didn't immediately respond to an email message seeking comment. If convicted, he faces up to 30 days in jail and a $500 fine.

State Sen. Mia McLeod, who represents the area, said Wednesday on the Senate floor that she'd spent much of the previous day in discussions about the incident and planned to meet with the sheriff later in the day.
"My sons have a freaking right to live," said McLeod, who is Black. "Another unarmed Black man could be dead today because he was walking in a neighborhood that, I am told, is adjacent to his, doing absolutely nothing."

Isn't that what they're always doing?... Nothing? https://www.cbsnews.com/news/jonathan-p ... man-video/
Top

For what they are worth, which isn't much, an Alliance member sends me "Google alerts" for mentions in media of our recently banned book The Turner Diaries. Here they are for this week. Everyone except me can "like" these on Faceberg, and follow them on Tweeter.

USPS is having enough trouble delivering the mail in a timely manner that it should concentrate on improving service instead of spying on American's social media activiry.

When I showed a copy of this internal USPIS memo to my local postal facility's postmaster he told me that was only to monitor social media activity of postal workers. The memo says otherwise. I told him he could keep the copy I'd printed for him. See it here:
https://nationalvanguard.org/wp-content ... dacted.pdf

Do postal employees have "right-wing Parler and Telegram accounts"?
Top

Social media appears to be a two edged sword, on one side is information giving where users enter data on their lives. On the other is information gathering, the taking of what others offer.

As Whites are increasingly under attack by enemies bot near and far in regards to physical proximity, I believe it best to not give anything about you away while simultaneously taking what's offered to you.

Abstention from using one of these tools can't be faulted if one is concerned only about one's self. However, if an Alliance member with responsibilities towards recruiting new members were serious, these tools should be used for character vetting.
Activism materials available! ===> Contact me via PM to obtain quantities of the "Send Them Back", "NA Health Warning #1 +#2+#3" stickers, and any fliers listed in the Alliance website's flier webpage.
Top
Post Reply
5 posts • Page 1 of 1