Dr. Seuss didn’t have ‘a racist bone’
in his body, stepdaughter says
The publisher announced Tuesday that it will stop selling the titles because they “portray people in ways that are hurtful and wrong.”
By Noah Manskar | New York Post

One of Dr. Seuss’ stepdaughters insisted to The New York Post on Tuesday that the world-famous children’s author was no racist — and that she hopes his six controversial kiddie books yanked from publication will be back.

"There wasn’t a racist bone in that man’s body — he was so acutely aware of the world around him and cared so much,’’ Lark Grey Dimond-Cates said of her late now-embattled stepdad, whose real name was Theodor Seuss Geisel.

The publisher of the Dr. Seuss books, Penguin Random House, announced Tuesday that it will stop selling six of his titles because they "portray people in ways that are hurtful and wrong."

Dimond-Cates said the publishing house’s arm that oversees his legacy, Dr. Seuss Enterprises, informed her Monday about the decision not to continue printing "If I Ran the Zoo," "And to Think That I Saw It on Mulberry Street," "McElligot’s Pool," "On Beyond Zebra!," "Scrambled Eggs Super!" and "The Cat’s Quizzer."

"I think in this day and age it’s a wise decision," she told The Post of the move.

"I think this is a world that right now is in pain, and we’ve all got to be very gentle and thoughtful and kind with each other.

"This is just very difficult, painful times that we live in," said Dimond-Cates, a California sculptor who added that Geisel came into her life when she was in grade school.

"We’re taking that into account and being thoughtful. We don’t want to upset anybody.’’

Dimond-Cates’ mother was Geisel’s second wife, Audrey Geisel, and the sculptor also has a sister, another of the author’s stepdaughters, Leagrey Dimond. Dr. Seuss did not have any children of his own.

Still, Dimond-Cates said she hopes the six pulled books eventually will go back into print "because his body of work is unique."

She described her stepdad as "a sensitive, intelligent, caring man" who was "a product of his times, as we all are" — noting that he revised some of his illustrations over time and advocated for environmental conservation through books such as "The Lorax."

She recalled that three of the halted titles — "Mulberry Street," "McElligot’s Pool" and "If I Ran the Zoo" — grew out of Geisel’s memories of his "very happy childhood" in Springfield, Mass.

She noted that more than 20 publishers passed on the book — which takes its name from an actual street in Springfield — before it became the first to be published under Geisel’s iconic pen name.

In one of Geisel's banned books he represented Asians with horizontal lines as eyes and holding chop sticks!

He represented Africans in another banned book as barefooted and with grass skirts!

Read how the Southern Poverty Law Center hate group was behind this banning of the Jew "Dr. Seus's" children's books, here: https://www.cnsnews.com/blog/craig-bann ... -work-anti

The educational arm of the Southern Poverty Law Center (SPLC) has bullied a Virginia school district into cancelling any mention of beloved children’s book Author Dr. Seuss on a pro-reading day established by National Education Association (NEA) to honor his birthday.
Every year since 1998, schools have celebrated “Read Across America Days” on Seuss’ birthday, March 2. But, the Loudon County, Virginia school system will snub Seuss this year, bowing to the demands of SPLC’s “Learning for Justice” activists, The Daily Wire reports:


“Learning for Justice — a left-wing educators group — is demanding that Dr. Seuss be canceled. A prominent Virginia school district has taken marching orders and ordered its schools to avoid “connecting Read Across America Day with Dr. Seuss.”

“Loudoun County Public Schools, one of the nation’s most affluent school districts, announced that it will no longer recognize Dr. Seuss on his birthday. In an announcement obtained by The Daily Wire, the school district said that Dr. Seuss’s children’s books contain “racial undertones” that are not suitable for “culturally responsive” learning.”

As evidence against Seuss, Learning for Justice has cited a study titled “The Cat is Out of the Bag: Orientalism, AntiBlackness, and White Supremacy in Dr. Seuss,” which claims that:


“Some of Dr. Seuss' most iconic books feature animal or non-human characters that transmit Orientalist, anti-Black, and White supremacist messaging through allegories and symbolism. These books include ​The Cat in the Hat​; ​The Cat in the Hat Comes Back​; ​The Sneetches​; and ​Horton Hears a Who!”

One of the study’s criticisms, for example, is that the cat character in The Cat in the Hat books is racist because his mouth is open to many times:


“The Cat’s mouth is also depicted as open wide on fifteen of the nineteen pages he is present. Nel cites Sianne Ngai’s research that explains, ‘the mouth functions as a symbolically overdetermined feature in racist constructions of Blackness.’”

I suppose Tucker Carlson and those other script readers at Fox News have never seen the book that I own, Dr. Seuss Goes to War. Before "Dr. Seuss" did Horton Hears a Who and other children's books he drew extremely racist anti-German cartoons and anti-Jap cartoons to encourage American intervention in the war against Germany, then against Japan.

Here's one of his anti-German cartoons that is also anti-Charles Lindbergh, the American hero who was the foremost spokesman for the patriotic America First Committee that tried to keep America out of the unnecessary European war that was to be fought for Geisel's "honorary" tribe: 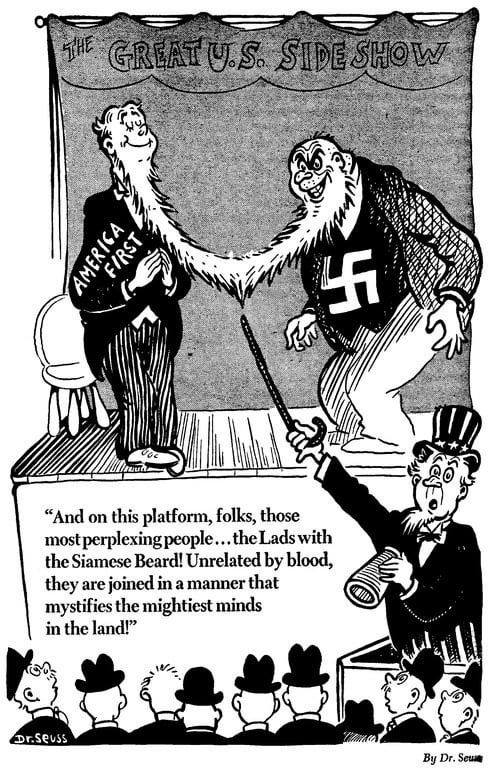 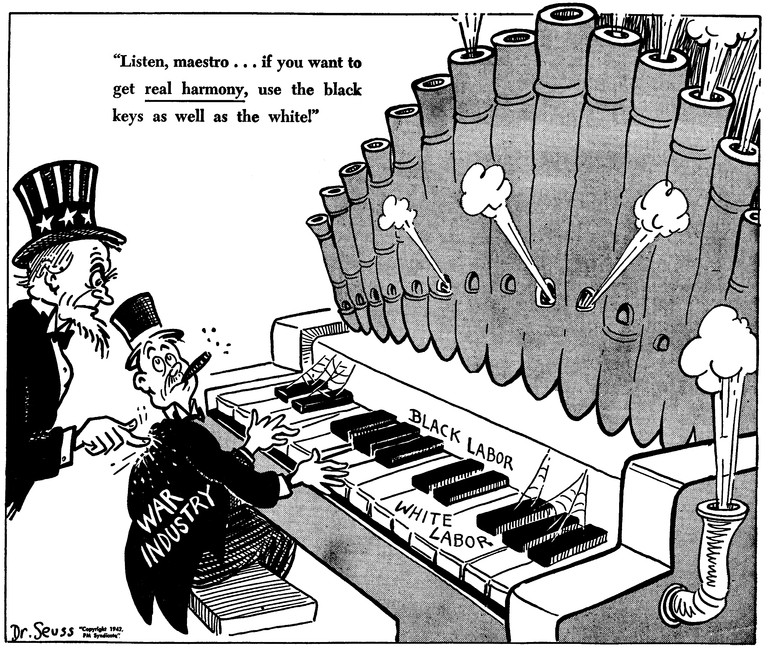 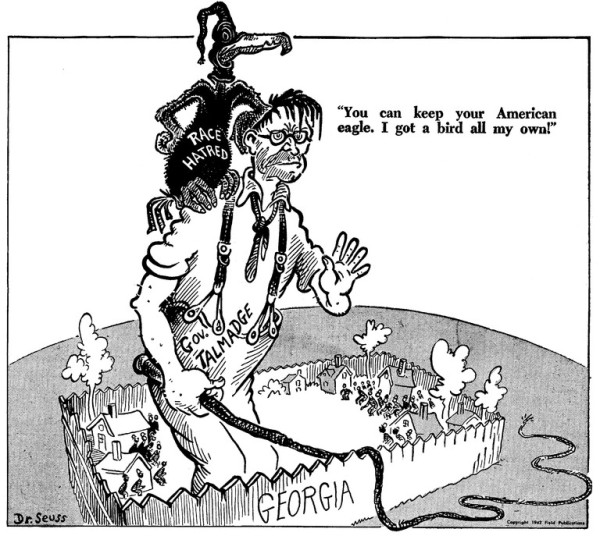 And had special hate in his honorary Jewish heart for White preservationist hero, Senator Bilbo.

Yes, "Dr. Seuss" was a racist: he hated Whites.

The honorary cartoonist started calling himself "Dr." Seuss, but wasn't one until Dartmouth College conferred to him an honorary PhD much later in his life. The mayor of Jerusalem also made him an "honorary Jew" years later for all of his good work for Jewry.
Top

Thanks for sharing, Will. I've heard about Seuss' political cartoons, but I hadn't seen them before. It's funny to me he's only 'racist' after he's been long dead. I didn't know Seuss' history when I was younger, but I never was into his books. The illustrations are weird to me and I just never did get into the characters.
Top

Interesting to see Dr. Seuss's anti-German-anti-Nazi and anti-white propaganda. I'm not surprised by it.

The anti-white woke madness is running amok, totally out of control. Although I did not see Harry and Meghan's interview with Oprah, it seems to be the big story right now, with Prince Charles and the Queen of England herself now being denounced as "racists!" Just shows nobody, no matter how high, is above this witch hunt, which will eventually eat its own, much like the Jacobin madness of the French Revolution.

This really is poetic justice for the British royals. It may eventually bring down the monarchy and all lesser members of the aristocratic nobility. Serves them right for fighting two wars to destroy Germany, all motivated by greed and jealousy and serving the Jews. Germany has been put through generations of hell before, during and after those wars. What karma if the Queen of England joins Hitler as another evil racist.

We are to the point where anyone who is white who is not married to a non-white -- like Harry -- is obviously a racist. So Prince Charles and Camila are racists. So are Prince William and Princess Kate. And the Queen herself is a racist. We are watching the present insane order destroy itself. Time to work harder to build a whiter and better world. Here is a link to the latest on the mess with the British royals:https://www.dailymail.co.uk/news/articl ... si=1493933
Top
Post Reply
4 posts • Page 1 of 1