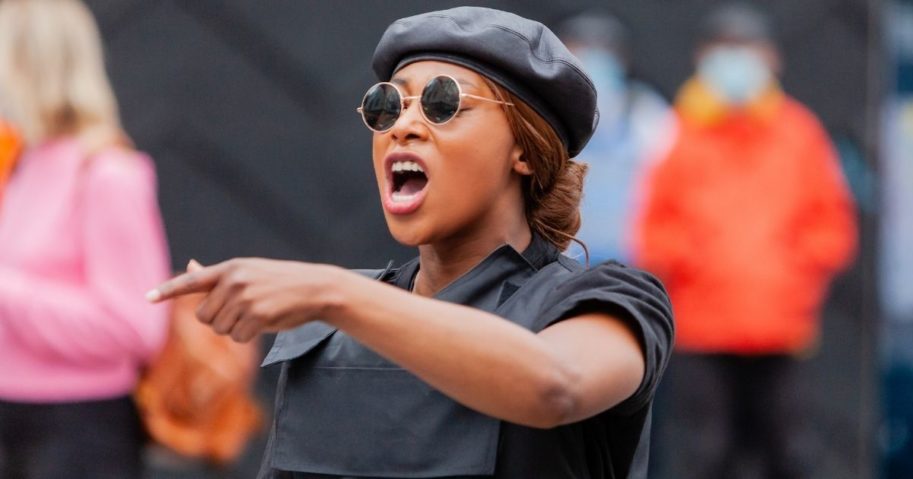 Activist Sasha Johnson is seen above in London on Aug. 30, 2020. (Daniel Samray / Shutterstock)

Should “race offenders” be treated like pedophiles? Sasha Johnson, the leader of a new British political party, says yes.

According to the Daily Mail, Johnson — the soi-disant “Black Panther of Oxford,” who rose to prominence after appearing in a black beret and camouflage pants during Black Lives Matter protests earlier this year — says her party platform would bar people guilty of those offenses, including so-called “micro-aggressions,” from living in certain neighborhoods or holding certain jobs.

Johnson, 26, was one of the organizers of the Million People March, according to ITV. (The march actually attracted hundreds.) She’s now the leader of the Taking the Initiative Party, or TTIP. It was first described as the first “black-led” party in the United Kingdom, although Johnson now describes it as “black-founded.”

In an interview with the Mail, she said that the “race offenders” register would operate in a manner “similar” to a sex offenders register.

The national register, while not clearly outlined, would disallow those on it from living near racial minorities.

“It’s similar to the sex offenders register,” she said in the interview, published Tuesday. “If you were to be racially abusive to someone, [the register] would question whether someone is fit enough to hold a particular job where their bias could influence another person’s life.”

However, the kind of behavior that would land you on this list seemed rather vague. Oh, but thankfully, you’d get a warning.

“A lot of racism happens at work and places of education in a micro-aggressive way. If you exhibit an element of bias at work, you should probably receive a warning first [before later being added to the register] so people know in future that you hold these views,” she said.

“While the party does not provide a list of specific [offenses] which would warrant inclusion on the register, its manifesto does state that anyone merely ‘accused’ of an [offense] would be added, as well as anyone ‘charged’ with a race crime,” the Mail reported.

And if you end up on the list, Johnson said “you could be excluded from ‘certain fields’ of employment — or even banned from living near people from ethnic minorities,” the outlet added.

“If you live in a majority-colored neighborhood you shouldn’t reside there because you’re a risk to those people — just like if a sex offender lived next to a school he would be a risk to those children,” she said.

In the interview, Johnson also said reparations were necessary because the U.K. government’s long-ago legacy of slavery and the fact that capitalism “holds us down” required recompense.

“Reparations can take the form of tax-free periods, which would give time to build back up economic stability in black communities,” she said.

“We have to remember that the Jewish community received reparations for the Holocaust, and no one speaks about forgetting the Holocaust.”

Now, granted, TTIP isn’t in a position to make any of this a reality.

The party was just founded after the Black Lives Matter protests over the summer, after all — and while they say they want to contest seats in the next general election in the United Kingdom, that’s likely years off.

While general elections can theoretically be called at any time in the U.K., they’re only mandated every five years. While the party in power can call an election at any time, the Conservative Party and its allies didn’t just beat the Labour Party and its coalition partners in the 2019 general election, they ran up the electoral score like Clemson beating up on Northern Oklahoma State at Southern Butte during the annual football homecoming game — mostly thanks to then-Labour Party leader Jeremy Corbyn, a member of the party’s far left who faced not-infrequent and not-unjustified accusations of anti-Semitism.

Thus, it’s unlikely Prime Minister Boris Johnson’s government will call for an election before the mandated 2024 election unless things get worse for the left. In that case, TTIP might be able to grab a seat or three in Parliament — although that seems unlikely, at least if you look at their Twitter account.

To put this in perspective, the British National Party — a politically toxic party which quite literally espouses fascism and racism (as opposed to just garden-variety liberal name-calling “fascism” and “racism”) — has over 12,000 followers despite the fact they ran one candidate and received 510 votes in 2019.

And keep in mind, this comes after a summer in which the TTIP’s co-founder (not to mention its issues) was very much in the news.

However, just because a “race offender” registry isn’t coming to the U.K. anytime soon, that doesn’t mean it won’t influence policy.

First, ideas from the fringes tend to work their way into the mainstream. Take TTIP’s positions on reparations. Are those that far outside of what the left believes in terms of reparations now? All it takes is a little shove in the right direction and, bam, that’s where the Labour Party will be. A “race offender” list is further off, but fringe voices could still make sure it remains an agenda item.

Second, minor political parties can play a larger role in U.K. politics than they do in many other countries. After the 2017 general election, for instance, Prime Minister Theresa May’s government had to bring the Democratic Unionist Party from Northern Ireland into the governing coalition.

This was problematic because, as The Guardian noted, the party had connections with the Ulster Resistance, an armed paramilitary group that played an ugly role in the Troubles in Northern Ireland by smuggling guns into the country.

The DUP mostly wanted £1 billion ($1.36 billion) in aid for Northern Ireland in exchange for their cooperation. If TTIP manages to capture a few seats, however — something that’s not prohibitively difficult in the U.K., even if your party only has 264 Twitter followers — and their participation in a coalition could make or break a government, what’s to say they’re not going to want some version of the “race offense” list put into place?

It may not be as odious as what Johnson is proposing, particularly with the minuscule amount of power her party would wield. It’d still exist.

Finally, there’s a tendency to think ideas like these are funny until they sneak into the cultural sphere via a back door that’s been left unlocked. The “Black Panther of Oxford” isn’t going to be prime minister anytime soon. Her party might never win a seat.

Re: Political Leader Pushes To Treat 'Race Offenders' Like Pedophiles, Control Their Housing, Keep Them Jobless

Another article focusing upon the same subject. 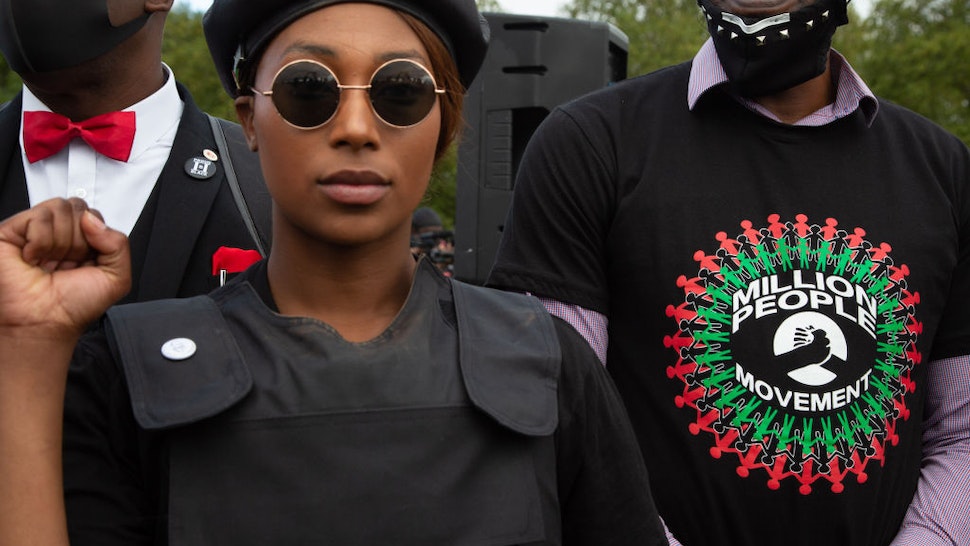 A U.K. activist who leads a Black Lives Matter-inspired political party has called for a “race offenders” registry — a national database of anyone “accused” or “charged” with racism. The registry would bar those on it from certain jobs and from living near people of color.

Sasha Johnson, the activist calling for the registry, calls herself the “Black Panther of Oxford” and was seen regularly at BLM protests in the United Kingdom earlier this year, the Daily Mail reported. She spoke to crowds “wearing camouflage trousers, a black beret and a stab-proof-style vest,” the outlet added.

Johnson, 26, exclusively told the Mail that the race registry would be similar to the sex offender registry and include people accused of “microaggressions,” which are perceived discriminations against a marginalized group that may not even be intentional. In essence, it means that anyone who claims they’ve been offended by another person would be able to destroy someone’s life by adding them to the registry.

“It’s similar to the sex offenders register,” Johnson told the Mail. “If you were to be racially abusive to someone, [the register] would question whether someone is fit enough to hold a particular job where their bias could influence another person’s life.”

“A lot of racism happens at work and places of education in a micro-aggressive way. If you exhibit an element of bias at work, you should probably receive a warning first [before later being added to the register] so people know in future that you hold these views,” she added.

Johnson said the registry would ban people from living in ethnic-minority communities.

“If you live in a majority-coloured neighbourhood you shouldn’t reside there because you’re a risk to those people – just like if a sex offender lived next to a school he would be a risk to those children,’ she told the outlet.

She said the idea was suggested to the Black Lives Matter group. The Mail noted that TTIP hasn’t laid out the specific offenses that would warrant inclusion on the registry but said people who had merely been “accused” would be included.

Johnson also said certain ethnic minority politicians in the U.K. are merely “tokenistic” for not adhering to her particular radical beliefs or having more power in parliament. Further, she has demanded reparations for black people from the British Government due to historical offenses.

Anyone who disagrees with Johnson has been subjected to her cruelty. Over the summer, videos were posted showing her repeatedly calling a black man a racial slur because he disagreed with her, suggesting she would end up on her own registry. She has also discussed enslaving white people on her Instagram account.

In addition to her work for TTIP, Johnson also works with a U.K. organization called the New Black Panthers Party “and has called for the establishment of a ‘black militia’ in the UK,” the Mail reported.