Adolf Hitler wins election in Namibia: Politician
named after National-Socialist leader sweeps
to victory but promises 'I'm not striving for
world domination'
* Adolf Hitler Uunona was elected with 85 per cent of the vote in a regional poll
* He said his father had named him Hitler without realising what the name meant
* Former German colony in Africa still has a small German-speaking population

By TIM STICKINGS FOR MAILONLINE
3 December 2020

A politician named after Adolf Hitler has won a seat at a Namibian election - but says he has no plans for world domination.

Adolf Hitler Uunona was elected with 85 per cent of the vote in the former German colony, which is still home to a small German-speaking community and where a number of streets, places and people still bear German names.

After winning the seat on the ticket of the ruling SWAPO party - which has ruled Namibia since independence from apartheid South Africa in 1990 - the politician told Bild that he had 'nothing to do with' Nazi ideology.

'My father named me after this man. He probably didn't understand what Adolf Hitler stood for,' his namesake said.

'As a child I saw it as a totally normal name. Only as I grew up did I understand that this man wanted to conquer the whole world.' 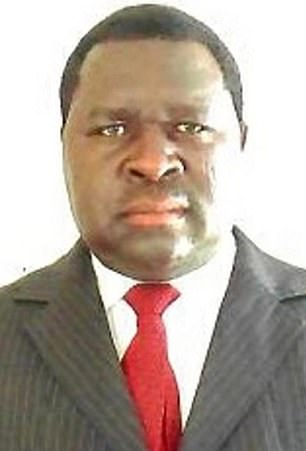 The politician said his wife calls him Adolf, adding that he usually goes by Adolf Uunona but that it would be 'too late' to change his name officially.

'The fact I have this name does not mean I want to conquer Oshana,' he said, referring to the region where he won the election. 'It doesn't mean I'm striving for world domination.'

Uunona won 1,196 votes in the recent election compared to 213 for his opponent, returning him to a seat on the regional council which he previously won in 2015.

His name was abbreviated to 'Adolf H' in a list of candidates printed in a government gazette, but his name appeared in full on an official results website.

Once known as German South West Africa, Namibia was a German colony from 1884 until the empire was stripped of its possessions following World War I.

The real Hitler would later use the humiliation of the post-war Treaty of Versailles as a propaganda tool to win support for the Nazis in the 1920s and 1930s.

While Germany has spent 75 painstaking years trying to atone for the war and [alleged] genocide that it unleashed under Hitler's rule, its colonial atrocities in Namibia are little discussed - but pressure for reparations has been growing in recent years. [Duh! Imagine that]

German soldiers [allegedly] slaughtered some 65,000 Herero and 10,000 Nama tribespeople in a bloody campaign to suppress a local revolt between 1904 and 1908.

The [alleged] killings came after German occupiers forced native tribespeople off their land and recruited them for forced labour, leading to an uprising in which Herero people killed 123 German settlers.

German soldiers with captured indigenous people in Namibia in 1905, when the country was part of
the short-lived German colonial empire
---