I put this comment under the text of Men of Valor Maybe a few of the hundres of thousands of visitors there each month will be inspired to join our Alliance:
---

Will W. Williams, National Alliance Chairman
I was listening to William Pierce’s audio of this American Dissident Voices Cosmotheist sermon the other day on tract 8 in the sixth volume of our Power of Truth series:comment image 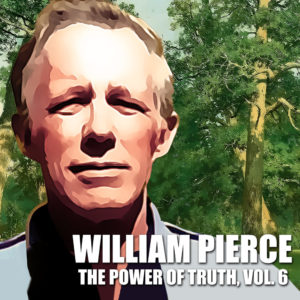 Listening to the audio is much more powerful than is simply reading the script. Every Alliance member should own all eight volumes of POT (160 WLP sermons) and listen to them regularly to reinforce their purpose as Alliance members.
—

They are men without ideology, men whose only fixed principle is always to do what is advantageous for themselves. And, in a sense, they are the “best” of their type: that is, they have worked harder, been smarter and meaner, and hewed more closely to the party line — to the established body of cant — than those who didn’t make it to the top. The “fittest” in any society survive and prosper.

But valor, unfortunately, does not seem to have survival value in 20th-century American society — at least, not the kind of valor which we remember fondly from bygone centuries. What would an old-fashioned Yankee or a Southern gentleman do in today’s America? How would he react upon encountering a Black male swaggering down the sidewalk with a White woman on his arm? Suppose he came face to face on the street with one of the filthy creatures who has made a career in politics, the media, or the pulpit by helping to bring about the state of affairs in which White women dare to be seen in public on the arms of Blacks. How long could a valorous man stay out of prison?

The best men today know that they are living in enemy-occupied territory, and upon such a sidewalk encounter they only grit their teeth and pass in silent rage, while the worst display an ingratiating smile.

But there was no resistance to […what Solzhetitzen described in Soviet Russia]. There were no men of valor. The people were like sheep. The murders continued. And I’m afraid that after the Jews have their “hate crime” and “hate speech” laws in place in this country, Americans will put up no more resistance to the FBI than the Russians did to their secret police 70 years ago.

One of my favorite authors is Brooks Adams, the 19th-century American economist and historian. In his book The Law of Civilization and Decay Adams put forth the idea that the spiritual climate of a particular period in history favors the survival and proliferation of men with a particular inner orientation, while driving men with a different orientation out of existence, much in the way the physical environment favors or disfavors a particular somatic trait.

Adams divided men roughly into two classes: spiritual man and economic man. The former are what I would call men of valor. Adams saw their epitome in the English yeomanry of the Middle Ages: freeholding farmer-warriors. They flourish during the period when a new civilization is being established.

The other class, economic man, epitomized by the merchants and bureaucrats who later replaced the yeomen, flourishes during the period of a civilization’s decay and collapse. Adams pinpointed democracy as an institution congenial to economic man but especially inimical to the existence of spiritual man.

The entire Western world — not just America — has been spiritually dead since the Second World War. Economic man has swarmed over its corpse, fattening himself on its material remains and multiplying mightily. Physical collapse may not yet be imminent, but the decadence is profound and irreversible. Valor, sorely needed to see us through the coming night and hold us to a worthy purpose until the new dawn, is a memory growing fainter by the decade.

As the West continues its slide into chaos, strong men, White and non-White, will rise to provide some degree of order and security for their adherents. Some will not be much more than local mafia chiefs; others will carve out regional or even national constituencies based on common economic interests, common ideologies, common ethnicities, or some combination of these.

In each case the leaders of these groups will be distinguished by valor of a sort. They will be men who have proved themselves tougher, more energetic and aggressive, and cleverer than their rivals. They will command respect as well as obedience from the members of their groups — which is more than can be said for America’s present ‘leaders.’

We will see more and more a return to leadership based on personal strength rather than institutional sanction — to natural leadership, the kind which existed among our people thousands of years ago, before we began building cities and writing laws, and which still exists among many non-White populations today. That’s also still the way it is in some more-or-less civilized areas just outside the borders of the Western world: in places like Lebanon, for example, and in Latin America.

Now, rule by mafia bosses may be fine for Levantines and Latins, but we need more than a valor based only on toughness, cleverness, and ambition. The West has no shortage of tough, clever, ambitious men. And we still have many who are physically strong and courageous — although perhaps not so many these days as we would like.

The valor we remember — and the valor we must have again — depends at least as much on moral courage as on physical courage. Even more, it depends on the inner sense of direction which must guide the man of valor, if his courage and strength are to be used to a worthy end.

Originally the word valor meant value, worth. A man’s worth was a measure not of what he owned or controlled, however — not of how many shares he could buy in the stock market or how many votes he could collect at the polls — but of what he was.

The ideal man of valor is guided unerringly by his inner compass. He is imperturbable and implacable. His loyalty to his cause is his honor, and his actions are as unaffected by considerations of personal comfort or safety as by the opinions of lesser men.

How can we have such men to lead us in this age of Jewish television, democracy, and the supremacy of the marketplace?

A man does not acquire valor simply by making a resolution to act valorously; it is the product of a lifetime of right living and right thinking by a man born with the right stuff in him.

Surely, men of our race are still being born with the right stuff. Economic man may be forcing spiritual man out of existence generation by generation, but the process is not complete yet.

Our problem is to provide an environment which does not stunt or warp the spirits of our best men and women. The environment which prevails in America today produces from our best stock merely lawyers tricky enough to out-shyster the trickiest Jew, businessmen hard-driving enough to beat out the most grasping Levantine competitor, professionals in every field willing to jettison scruples and truckle to alien arbiters in order to stay ahead of the pack. […]

What we must do, no matter what it takes, is change that climate. We must devise a way to nurture the best seed that we have and to provide a regimen and a tutoring, an upbringing and an inculcation, for the yield of that seed which will once again give us men of real valor, in the best sense of the word. https://natall.com/join-us/
—
Top
Post Reply
1 post • Page 1 of 1