I’ve been reading up on gangstalking/targeted individuals and it got me wondering if the extremist group who targets individuals by way of mind control, cyberstalking, orchestrated events, and other intrusive tactics really exists.

Does the NA believe gangstalking is real? What are it’s views?

Do you think non whites are gangstalking, attempting to destroy the white race?

Re: Gangstalking and targeted individuals

Redwhiteandwhite wrote:I’ve been reading up on gangstalking/targeted individuals and it got me wondering if the extremist group who targets individuals by way of mind control, cyberstalking, orchestrated events, and other intrusive tactics really exists.

Does the NA believe gangstalking is real? What are it’s views?

Do you think non whites are gangstalking, attempting to destroy the white race?

I've never heard the term gang stalking until you mentioned it, so did a search and found the following definition in the Internet "Urban Dictionary." It would seem to me from this description that strong, confident White people who have the courage of their convictions wouldn't seem vulnerable to such tactics. Same with "doxxing" by antifa freaks. Our people should design their lives so they can live openly and associate among their own and speak their minds without fear of losing family or career due to "community mobbing.".
---

Gang stalking is simply a form of community mobbing and organised stalking combined. Just like you have workplace mobbing, and online mobbing, which are both fully recognised as legitimate, this is the community form.
Gang stalking is organised harassment at it's best. It the targeting of an individual for revenge, jealousy, sport, or to keep them quite, etc.

It's organised, widespread, and growing. Some describe this form of harassment as, "A psychological attack that can completely destroy a persons life, while leaving little or no evidence to incriminate the perpetrators."

The people getting targeted seem to be (single) woman, minorities, outspoken individuals, whistle blowers, dissidents, people who have gone against large corporations, etc.

3. Goals of this hate campaign.

The surprising thing is that gang stalkers can be found in every level of society. There is no real age barrier, gender barrier, and a variety of races do participate. In almost every occupation in society you can find people who are going along with this.

Gang stalking for many is seen as a game, a sport to be played with another individuals life. Many do not understand or care that the end consequence of this game is to destroy a person.

"It is conceivable that the participants in the harassment don't even know why the person has been targeted, nor would most of these individuals have any personal stake in harassing the victim.

- Gang stalking is an both an addictive behavior as well as a form of entertainment for the stalkers. There is a vicious kind of pleasure that they derive from bullying their victim. Clearly they like the feeling of being "in control".

Like our society's current obsession with "reality TV", this activity must inevitably gain popularity as the ultimate experience of "reality" entertainment. To the perpetrators, their targets are merely their prey, in a game that never ends. But make no mistake, whatever the reasoning behind it, this is a vicious and calculated hate crime."

-Others are blackmailed or forced into talking part in this activity.

-Others go along with it because they want to fit in and feel part of something that is large and powerful.

-Some are part of community groups who believe they are targeting an undesirable.

-Some are part of the informant groups within cities.

This will involve following the target everywhere they go. Learning about the target. Where they shop, work, play, who their friends and family are. Getting close to the target, moving into the community or apartment where they live, across the street. Bugging targets phone, house, computer activity.

This is done via slander campaigns, and lies. Eg. Saying the target is a thief, into drugs, a prostitute, pedophile, crazy, in trouble for something, needs to be watched. False files will even be produced on the target, shown to neighbours, family, store keepers.

Flat tires, putting dirt on targets property. Mass strangers doing things in public to annoy targets. These strangers might get text messaged to be at a specific time and place, and perform a specific action. If might seem harmless to these strangers, but it could be causing great psychological trauma for the target. Eg. Blocking targets path, getting ahead of them in line, cutting or boxing them in on the road, saying or doing things to elicit a response from targets. Etc.

7. Where can you get help if you are a target?

Use these great links to learn more and to get help.

8. Gang stalking is an illegal form of harassment.

However when targets seek help they still get quite a bit of resistance. Some people in today's society even try to pass gang stalking off as a form of paranoia, even though the meetings in Toronto are held out of the Toronto Rape Crisis Center and many woman's support groups and crisis centers are now aware of gang stalking, and even training their workers to deal with this form of harassment.

In Korea the online version of this is well acknowledged and has even been written about in the International Herald Tribune.
http://www.iht.com/articles/2006/08/14/news/korea.php

Gang stalking has also been recognised by members of the mobbing community.
http://www.mobbing-usa.com & http://www.gangstalking.ca

The problem with gang stalking just like other urban slang is that it has not been normalised in society, and until it is people will continue to misunderstand this modern day reincarnation of several old time harassment's.

Eg. Gang stalking is similar to what the KKK used against blacks in the south, what Hitlers Brown Shirts used against the Jews, and what the organised harassment the Stasi used against dissidents in East Germany.

It can be hoped that with enough education and understanding this issue will someday become normalised in society and that there will be enough understanding and support for targets. 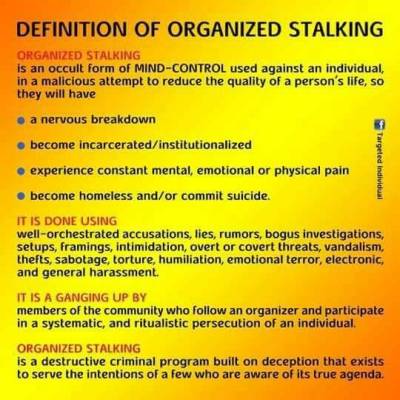