Confederate Flag Means ‘You Intend To Marry Your Sister'

Confederate Flag Means ‘You Intend To Marry Your Sister' 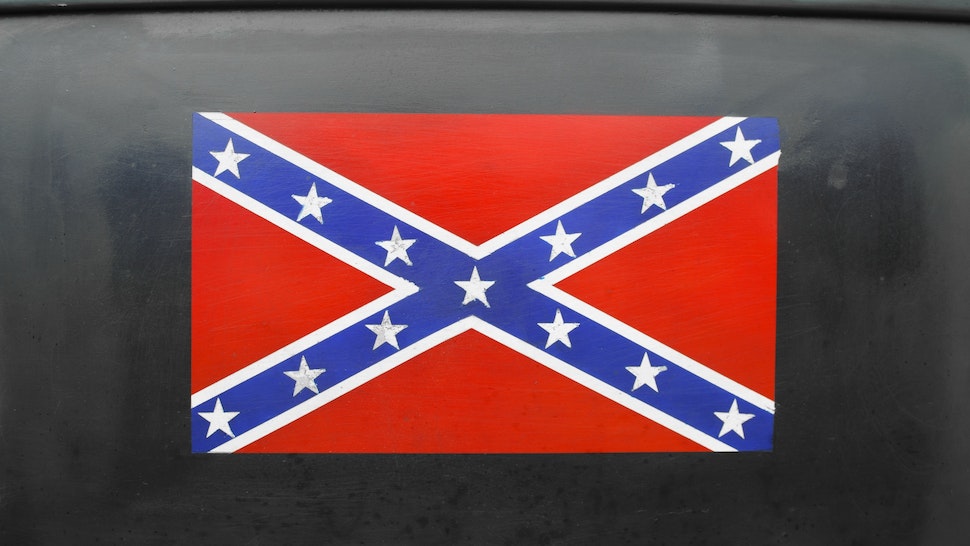 A Georgia teacher allegedly showed a Powerpoint image of a Confederate flag to the teacher’s classroom accompanied by a caption reading, “A sticker you put on the back of your pickup truck to announce that you intend to marry your sister. Think of it like a white trash ‘Save the Date’ card.”

That teacher has been placed on administrative leave.

The Washington Post, referring to the Augusta Chronicle, reported, “The image, originally taken from the popular webcomic The Oatmeal, was projected onto a whiteboard to explain the concept of a story within a story, the Chronicle reported.”

The incident allegedly occurred at Hephzibah High School, where the daughter of Melissa Fuller was in the teacher’s class. Melissa Fuller told WRDW, “She found it offensive, so she sent it to me and asked me what I thought.” Fuller posted the story on Facebook. Fuller stated, “A lot of [it] is that it’s not morally correct. It’s unethical. It’s just something you don’t want to discuss today in today’s world and especially inside of a classroom.” She added, “Why was that used? With it being such a rough area, why would you put that out there to start a class discussion that could have turned very ugly?”

Fuller said her daughter had once worn a Confederate flag belt buckle to school, then removed it after she was told it was inappropriate, but still received an in-house suspension. She asked, “If she can’t wear that belt buckle, then why is it appropriate to make an assignment out of it?”

WRDW reported that the district released the following statement: “The Richmond County School System is committed to creating a diverse, equitable learning environment for all students. The language used in the example was unacceptable and has no place in our classrooms.”

The Atlanta Journal Constitution explained the history of the Georgia state flag:

The Georgia state flag was changed Feb. 13, 1956, incorporating a Confederate battle emblem into the design, as a response to the Supreme Court rulings on desegregating schools …The Georgia Legislature approved a new flag in 2001, during the administration of Gov. Roy Barnes … Architect Cecil Alexander designed the ‘compromise’ flag that flew over the Georgia Capitol from 2001 to 2003. The current design was approved in a March 2004 referendum held on the same day as the 2004 presidential primary in Georgia.

Whoever would name a town in Georgia after Hephzibah (from the Jewish Torah) would be a product of the union between Eve and the Serpent.
---

Hephzibah or Hepzibah (English: /ˈhɛpzɪbə/ or /ˈhɛfzɪbə/; Hebrew: חֶפְצִי־בָהּ, Modern: ḥefṣīva, Tiberian: ḥep̄ṣīḇā, my delight is in her) is a figure in the Books of Kings in the Bible. She was the wife of Hezekiah, King of Judah (reigned c. 715 and 686 BCE), and the mother of Manasseh of Judah (reigned c. 687–643 BCE) . She is depicted in 2 Kings 21:1. According to rabbinic literature Isaiah was the maternal grandfather of Manasseh.[1]

Hephzibah is also a symbolic name for Zion once it has been restored to the favor of Yahweh in Isaiah 62:4.[2] (source: Wiki)
Top

Slandering Whites remains in season, as this story illustrates.

This ought to separate the type among us that accept their own degradation from those of us with healthier spirits.
Contact me via PM to obtain quantities of the "Send Them Back" stickers. Also available are the "NA Health Warning #1" stickers, and any fliers listed in the Alliance website's flier webpage.
Top

No picture of the teacher or the social media post? If this was something derogatory about faggots then the teacher would be lynched in the media.
After a quick search I came up with this

From a supposed “conservative” publication. Why not a similar response for the vulgar Georgia cat lady?
Top

White Man 1 wrote:No picture of the teacher or the social media post? If this was something derogatory about faggots then the teacher would be lynched in the media.
After a quick search I came up with this

From a supposed “conservative” publication. Why not a similar response for the vulgar Georgia cat lady?