Most Americans have heard of the high profile murder of Kate Steinle in the sanctuary city of San Fransissyco. Here is a site that maintains a list of numerous such murders. Not all victims are White, but all are American citizens apparently: http://www.ojjpac.org/memorial.aspKathryn
--- 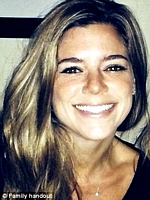 Francisco Sanchez, 45, a previously deported illegal alien from Mexico, has been charged with the July 1, 2015 murder of Kathryn Steinle, 32 of San Francisco California.

Steinle family members said that Ms. Steinle, affectionately called "Kate" by friends and family, was with her father on Pier 14, a popular local gathering place, when she was shot and killed. Witnesses took photos of the killer which led them to Francisco Sanchez, who was captured later nearby Ms. Steile's home.

At the time of the shooting, Sanchez reportedly had seven felony convictions and five prior deportations. He was also released from jail just months before the shooting because of the San Francisco's sanctuary policy for illegal aliens.

Ms. Steinle was a 2001 graduate of Amador Valley High School and was employed by Medtronic, a medical device provider.

The Steinle family is in shock over the death of their loved one. Her brother Brad said his sister was a loving and caring person who enjoyed making people laugh.

OJJPAC note: The City of San Francisco has passed laws protecting illegal aliens from federal law enforcement for years. The city likely has the most pro-criminal illegal alien Sanctuary policy in the nation, protecting them from federal law enforcement efforts to identify and deport unauthorized aliens from the US.
---
Source: Family Devastated After Woman Shot, Killed In San Francisco, By Vic Lee and Chris Nguyen, 7-2-15; In memory of Katie Steinle, it's time to finally shut down 'sanctuary cities', by Dave Ray Opinion contributor, The Hill, 11-2-17; Photo: Courtesy of the Steinle family which reserves its copyright.
Top

Re: Americans murdered by illegal aliens

Thank you for keeping Kate Steinle's memory alive here. It is exactly because of cases like this that create more racism. Rational Racism as I've heard it called. I like that saying. It's not that those on this forum are so much racist as they are concerned for their safety and that of their families. The greatest danger facing this nation as I see it is from the Great Replacement. Our politicians criminalize police officers while creating victims out of criminals. The media perpetuates this propaganda to the sheeple in the audience and our children are sold this lie in the public education system. Sacramento just paid the Stephon Clark family several million dollars for a wrongful death claim. Stephon Clark was in the commission of a crime when he was killed. The Officer who defended himself will never work as a Police Officer ever again. Between 75% - 90% of all mass shootings in this country are committed by blacks, however the media makes it out to be a White phenomenon. If you are unfamiliar with Colin Flaherty you should watch his videos on www.bitchute.com. The Kate Steinle case galvanizes my point. To add insult to injury, California just dropped the last charge against Zarate, which was a felon in possession of a weapon. He may soon be a free man. I've heard the Federal Government is looking to file some sort of charges against Zarate. Since there were never murder charges brought against him and he was never tried in court maybe something could come of this. Not holding my breath however. The disgust I feel over this case is immeasurable. California is hostile in every way to its own citizens. The Progressives are just to emotional to let facts get in the way of their feelings. They will literally cut off their nose to spite their face. This state is a lost cause and I fear that other liberal minded politicians will turn their states into the living nightmare that is California.

Re: Americans murdered by illegal aliens

Forgive me I miss spoke and want to set the record straight. He was charged with her murder/manslaughter and was acquitted after 5 days of deliberation. He was convicted of being a felon in possession of a firearm, however that conviction was overturned on appeal on August 30th, 2019.