Somebody has been in the news

Re: Somebody has been in the news

New Order in the news in Charlottesville, with excellent analysis of why National Socialists do not form lasting alliances with Muslims.
---

Dear Racial Comrade,
On the evening of May 1, a team of National Socialist activists delivered 500-plus pieces of NEW ORDER printed material to White neighborhoods in Charlottesville and Greene County, Virginia. Eight days later, the Greene County Record ran a short story on the distribution, full of the usual half-truths and characterized by blatant hostility.

You may read the article for yourself, here:

Two days on, on May 10, our distribution was denounced by Ibrahim Hooper, National Communications Director of the Council on American-Islamic Relations, or CAIR. It is the largest and best-known Islamic pressure group in the US, with a high media profile and as much prestige as the media allows an anti-Israel group.

Hooper’s attack on the NEW ORDER was part of an anti-White press release issued by CAIR which also celebrated the removal of a Confederate statue in Isle of Wight County, Virginia.

Here is the portion of the press release which is concerned with the NEW ORDER:

"'As we welcome positive initiatives to remove and repudiate our nation’s legacy of slavery and white supremacy, it is more important than ever to speak out against those who spread hatred and bigotry,' said CAIR National Communications Director Ibrahim Hooper.

"Hooper said the American Muslim community and CAIR stand in solidarity with all those challenging anti-Asian hate, anti-Black racism, xenophobia, Islamophobia, anti-Semitism, white supremacy, and all other forms of bigotry."

This attack on the NEW ORDER by an Islamist organization confused some of our supporters. After all, the literature that had been distributed did not mention Islam at all, but merely called on White people to love their race and have White Pride.

One NEW ORDER supporter wrote me:

“One would think an Islamic group would be more concerned about the current slaughter of Palestinians by America's greatest ally than Confederate monuments in rural Virginia or a literature distribution from a group that supports an anti-Zionist position – but I guess not.”

At first glance, it does seem strange. Indeed, as I write these words, it has just been announced that new Israeli attacks on Gaza have claimed 69 lives, including those of 16 children and six women. One might think that the Jewish war of genocide against the Palestinians – almost all of whom are Muslim – might be at the forefront of Ibrahim Hooper’s mind, rather than Confederate statues and pro-White advocacy by the NEW ORDER.

For our part, we have always supported, and continue to support, the struggle for the liberation of Palestine.

Yet, this is hardly the first time that CAIR has gone out of its way to denounce National Socialist and White Nationalist literature and activities. In fact, it has made a habit of doing so.
But why? The relationship between the Islamic world in general and National Socialism at this particular historical juncture is complex, and the matter of CAIR even more so. I will address the various points involved individually.

(1) Islamic Factionalism – Islamic and Arab organizations are riddled with factionalism, even more so than the White advocacy cause. A prominent anti-Zionist Jew, Alfred Lilienthal, once commented to me that if he were to gather 10 Arabs together to discuss any given topic, they would likely represent 11 different viewpoints and 11 different organizations.

My point is that just because CAIR has denounced the NEW ORDER it does not follow that all Muslims agree or have the same level of hostility towards us that this one organization shows. 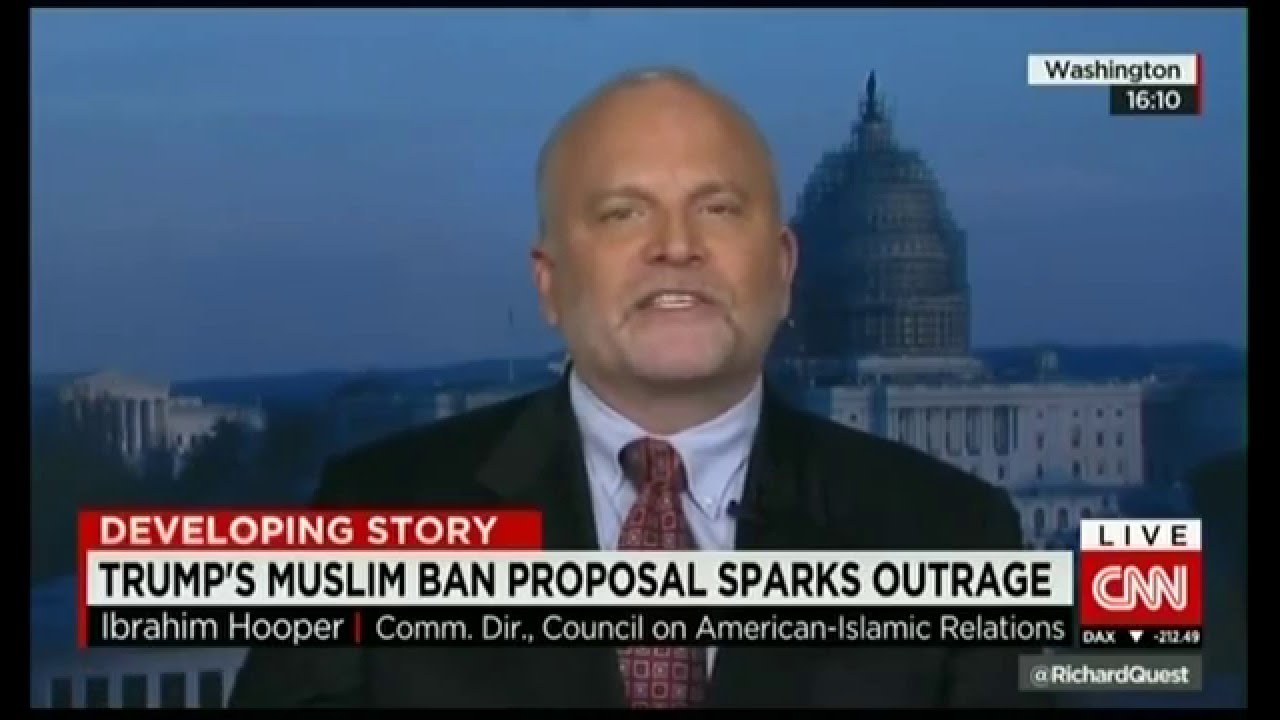 Mr. Hooper
“Ibrahim” is a traditional Islamic name. “Hooper” is not. He was born of White parents in Canada with the name “Douglas Hooper.” Physically, he is tall, fair-skinned and has light hair and eyes. Biologically, if not spiritually, he is White. After converting to Islam he moved to the US, where eventually he became the National Communications Director for CAIR.

I have met a number of White converts to Islam over the years. They have been a pretty sorry lot. One thing they all have in common is that they hate being White, and they hate White culture and civilization. Another feature they share is that they have a strong sexual fetish for non-White women.

The Internet tells me that Hooper is married to a "Muslim woman," but I have been unable to find out any other details about her, such as her name or race/ethnicity. My guess is that she is non-White and that his children are half-breeds of some sort.

It is likely that Hooper has a personal animus toward any form of White advocacy, addition to whatever theological concerns he may have.

(3) The Alliance between the Far-Left and the Jihadi Movement – Speaking strictly in ideological terms, it makes no sense for the Islamist movement and the Anarchist-Communist movement to be on friendly terms with each other. After all, the society each seeks to build is in complete opposition to the society the other envisions. One is based on a strict religious hierarchy and harkens back to the 7th century; the other seeks a world without hierarchy and without religion of any sort. One champions homosexual rights and the other throws homosexuals to their deaths from the rooftops of high buildings. One proclaims hedonism and excess while the other favors the practice of fasting, and whipping as a punishment for drinking alcohol. And so on.

Yet, the Islamist and Marxist strategists are in complete agreement on one thing: Western civilization – that is, White civilization – and the US government are their primary enemies. And so CAIR and other Islamists promote the leftist insurrection against what is left of the White West, whether this be Confederate statutes or the National Socialist call for White Pride.

To be sure, this alliance is a temporary one, and if a final victory is won over the Old Order by these varied insurrectionists, they will immediately turn on each other with unimaginable ferocity. But until then, the Jihadis and the far-left are in a tactical alliance with each other.

(4) Realpolitik vs. Ideology – This brings us to the real crux of the matter. Although it seems bizarre in terms of ideology, in terms of power politics, the alliance makes perfect sense. Each has something to offer the other, namely, the ability to effectively attack their common enemies.

Over the years, many people have asked us why we do not form a united front with the Islamists, the Ba’athists and Arabs in general against Israel and the Zionist-dominated US government. Such an alliance would, indeed, seem to make good sense ideologically.

But this is the ugly reality: There is no practical reason for the Arabs to ally themselves with National Socialists, because, at the present, we have nothing to offer them. In terms of realpolitik – the politics of hard reality – an alliance with us would only drag them down, while offering no benefits in return. Why? Because, as a movement, we are pitifully weak.

When (not if, but when) the Hitler movement can display some real political muscle, the situation vis-à-vis National Socialism and the Islamic world will be much different. By “muscle” I mean being able to reward our friends and punish our enemies. When this moment comes, you can expect to see all sorts of people, and not just Muslims, coming forth seeking an alliance with us. Why, perhaps even Ibrahim Hooper will be among them!

But as long as we are weak, we should expect to be everyone’s favorite whipping boy. As it stands today, there is no downside to attacking National Socialism, only an upside.

Yet, this cold acceptance of harsh political reality should not be a source of despair or demoralization – rather it should spur every National Socialist comrade on with new resolve and new energy to build our movement into the powerful, race-saving machine that it is destined to be!

If the road ahead seems too daunting for you, then you are in the wrong movement. But if you take on the challenge that lies before you, and steel yourself to persevere no matter what the odds or the sacrifice, then greatness awaits – perhaps not for you as an individual, but certainly as a member of the mightiest race ever to walk the face of the Earth!