Since as long as I can remember, I have been discontent with my biological sex
and with the gender roles associated with it. I have always been that odd,
feminine boy nobody wanted to play with. You know, the one all the boys bullied
and called a ‘fag’. Due to this innate femininity of mine I was irrevocably shunned
by my birth sex. In time, I accepted it and shunned males and maleness too. I
proudly proclaimed myself neuter, gender-less, standing at the border between the
two genders, blatantly refusing to pick a side. At that age, I could still get
away with it. Then I grew up. Gender stopped being something trivial and funny.
It became something serious, concrete. Breaking the gender rules was a veritable
crime, harshly punished with scolding, yellings and beatings. I never questioned
my gender identity before those hours of ‘discipline’. After them, I started doing
it. For the first time in my entire life, Doubt, like a malicious spider, spins
its wicked web inside my mind and heart. The evil flowers of uncertainty and confusion
bloomed inside my soul. I was forced to pick side. Either be a feminine man, ridiculed
and bullied by all, unwanted and unloved, or a transsexual woman, depressed and disowned
by her family, bankrupt from all of her surgeries. Neither of these possible realities
excited me. I wanted to be myself again, but this faceless, omnipotent entity, the
proverbial Society, didn't allow me to. I only had those two choices; everything else
was inhuman and impossible. By refusing to choose, I was apparently renouncing
my humanity.

The uncertainty and the fear only grew stronger.

Do I even have a choice in all of this?

I will never know.

I just want to be human.

Wade says, "Comments, anyone? This has now become a political issue as well..."

Wade says, "Comments, anyone? This has now become a political issue as well..."

Sadly so, and an utterly pathetic fashion statement as well. As a sick and dying society makes sexual freaks trendy, more and more sexual freaks climb out from under rocks and proclaim their demands for attention.

Some three percent of our society identifies as not heterosexual. Is it too much of a struggle to drive them into the sea?
Top

The Jew creation “LGBTQ.” First, he was a man. Then, he “became”
a woman. Now, he’s a man again. Confused? Not to worry. The so -
called “LGBTQ” movement was virtually built by Jews!

An Oregon court that granted the first individual legal recognition
for his “non-binary” sex designation has rescinded the status and
restored the sex on his birth certificate to “male.”
66474

An Oregon court that granted the first individual legal recognition
for his “non-binary” sex designation has rescinded the status and
restored the sex on his birth certificate to “male.”
66474
66474.JPG

Queers, trannies, their sympathizers/sycophants are confused.

I'm not. When mental handicaps/dysfunctions are paraded openly, be thankful that they're identifying themselves to us for future reference. It makes future National Alliance membership applications easier to screen!
Activism materials available! ===> Contact me via PM to obtain quantities of the "Send Them Back", "NA Health Warning #1 +#2+#3" stickers, and any fliers listed in the Alliance website's flier webpage.
Top

In a major setback for Jews, transgender girls
and women in Arizona would be barred from
participating in sports on the team that
aligns with their gender identity under
a proposed law.
66766

Sadly, I've worked with one. It was a terrible specimen. A drugged out Asian she/he that was so confused and repulsive. Her "parents" were a couple of liberal, trendy whites. At least their stupidity ruined a non-white. I called her out for her unprofessional demeanor and poor work performance but she could tell that it was because I was repulsed by who she was. Instead of addressing it face to face she tried to persuade the other employees that I was a bigot and hated alphabet people. Some of them knew this since I wasn't too shy in sharing my beliefs. Still, if it was a professional workplace I would have been reprimanded or worse. I miss the days of working with all whites...Maryland is filled with wretched refuse now.
Top

The Jew tranny billionaire! One member, the billionaire Jennifer Pritzker, is a male-to-female transgender who served in the US military.
67365

Jewish Tranny Rolls The Dice..... In the United States, using the incorrect pronoun or expressing suspicion that transgender people are simply mentally ill incurs a massive personal cost. Such expressions can get one put on a Southern Poverty Law Center hit list, banned from the ability to use social media and banking services, and opens one up to harassment and violence from anarchist and radical liberal militias given vast leeway to operate by the police.
67625
https://russia-insider.com/en/jewish-tr ... garch-clan

More confusion, now in the prisons: 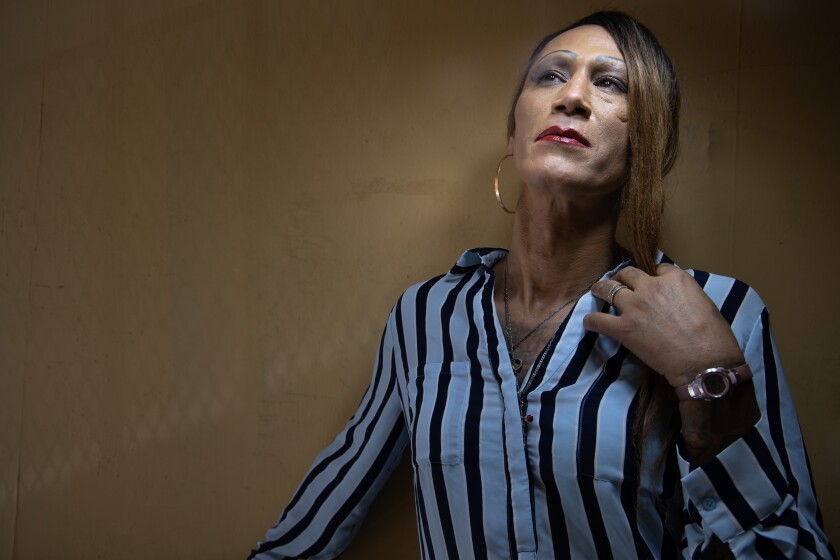 Jasmine Jones, a legal assistant at the Transgender Gender-Variant & Intersex Justice Project in San Francisco, has been in touch with people held in women’s prisons who have concerns about a new law that allows inmates to be housed based on their gender identity.(Paul Kuroda / For The Times)

By LEILA MILLER STAFF WRITER
APRIL 5, 2021
Kelly Blackwell longs to escape her life as a transgender woman in a California men’s prison, where she struggles every day to avoid being seen in her bra and panties and says she once faced discipline after fighting back when an inmate in her cell asked for oral sex.

After more than 30 years, and two decades since Blackwell began hormone therapy, her chance to leave arrived last fall when groundbreaking legislation gave transgender, intersex and nonbinary **inmates the right, regardless of anatomy, to choose whether to be housed in a male or female prison.

The demand has been high, with 261 requests for transfers since SB 132 took effect Jan. 1, according to the California Department of Corrections and Rehabilitation. It’s the start of a hugely sensitive operation playing out in one of the largest prison systems in the country...
---
**New word for the third sex (according to Wikipedia):
Non-binary (also spelled nonbinary) or genderqueer is an umbrella term for gender identities that are neither male nor female‍—‌identities that are outside the gender binary.[1][2] Non-binary identities can fall under the transgender umbrella, since many non-binary people identify with a gender that is different from their assigned sex.[3] Another term for non-binary is enby (from the abbreviation 'NB').[4]

Non-binary people may identify as having two or more genders (being bigender or trigender);[5][6] having no gender (agender, nongendered, genderless, genderfree); moving between genders or having a fluctuating gender identity (genderfluid);[7] being third gender or other-gendered (a category that includes those who do not place a name to their gender).[8]

Let's just stick with queer, which means peculiar. None of these peculiar freaks are eligible for National Alliance membership.