HI Ted, it is known that JP Morgan acts on behalf of the US Government and that
any losses are covered by the same Government and that this is all covered in law
that is listed in the Federal Registry for laws....there is no surprise here is
there? And I suspect the American Government is playing a role in suppressing the
price of gold (and silver) to allow the Chinese to acquire bullion as the Chinese
build reserves so that can earn a seat at the table when the USD is replaced as
the global reserve currency. The real question is how long will this all take to
play out?? Likely longer than we can be patient...just a guess

JPMorgan Chase, whose outspoken chairman and chief executive, Jamie Dimon,
joined a chorus of other business leaders condemning President Donald Trump's
response to the deadly violence in Charlottesville, Virginia, is pledging up
to $2 million to anti-hate groups. It is clear, he said in an internal email
Monday. JPMorgan is giving $1 million to be split between the ADL and the
Southern Poverty Law Center "to further their work in tracking, exposing and
fighting hate groups and other extremist organizations," said the email.

JPMorgan plans to build a 70-story office building in Manhattan. Their current
56-story unit will be demolished to make way for the $3.5B project. According
to one silver analyst, if (this crooked bank) JPMorgan owns 700 million ounces
of silver, a $5 price rise in the price of silver would pay for the new building.
Not that they need it. JPMorgan (by hook & crook) has assets of $2.5T (that's
TRILLION,folks)! They have almost $3T in assets under management and $24T under
custody and administration. They are the fourth largest public company and the
second most valuable bank in the world, by market capitalization. Their hedge
fund is the second largest in the world.

How Jamie Does It!

Central Banks Care about the Gold Price – Enough to Manipulate it!
In early March, RT.com, the Russian based media network, asked me
for comments and opinion on the subject of central bank manipulation
of gold prices. The comments and opinion that I supplied to RT became
the article that RT then exclusively published on its website on
18 March under the title “Central banks manipulating & suppressing
gold (and silver) prices – industry expert to RT“. This article is
now transcribed below, here on the BullionStar website:

Much has been written lately about the size and scope of JPMorgan’s COMEX
silver vault. We thought we’d add to that conversation today. First of all,
some background:

Carolina Reb • 2 minutes ago Hold on, this is waiting to be approved by
Commodity Trade Mantra.

I bet my entire retirement portfolio on Ted Butler's advise. Now it is beginning
to look like Jamie (JPMorgan) is going to keep silver suppressed at least
until their New York City 70-storey hi-rise will be finished...sometime around
in the mid 2020's. I am 73 years old with health issues. 2025 might as well be
the year 10,000CE for me.

Reportedly (via 'Net rumor), J.P. Morgan sank the Olympia (Titanic) to kill
those Senators who opposed his Federal Reserve Act passage. It would be Justice
to repeal the Federal Reserve Act and nationalize the bank, confiscating all
JPMorgan assets....

Wade says, "...and putting Jamie in a labor camp working to repay the titanic
wrongs he has done...for the rest of his natural life!"

During the next economic collapse, JP Morgan's massive silver stockpile that
they have been collecting since the price began to drop will make them the
richest and most powerful bank in history. The physical silver hoard held by
JP Morgan is larger than the hunt brothers and was accumulated at a time
when price was in decline. Like them or hate then, the reality is they know
money before it moves and most people think it's foolish to own silver.

JP Morgan, Jew banks & China are hedging against stock market crash and all their portfolio
longs. You can say the same about gold when talking about "if they dumped it all on the
open market it would crash the market. Look how much of that they and other banks hold.
I trade stocks and futures for a living. If you think 2008 was a market crash wait until
the next collapse. Markets at all time record HIGH's and Silver is hanging down at it's
floor. IMHO Buy low sell high.... If you think the stock market is due for a large correction
then silver should be ready for appreciation.

JPMorgan inherited an enormous short against silver when they absorbed the
collapsing [Jew-controlled] Bear Stearns (who had initially made the bet)
in the 2008 crisis. Necessity is the mother of invention, and often, fraud.
By continuing to short the stock on paper while simultaneously physically
buying it, JPM managed to cover that short on the cheap and accumulate
the single greatest stockpile of physical silver ever amassed in the
history of the world. It was such an airtight scheme that JPM has never,
ever lost money shorting silver. Illegal? Sure. But when the largest and
most prominent names in global finance all stand to gain millions and
regulatory authorities are bought and paid for, who’s going to stop them?

The most powerful bank in the world now owns more silver than any other
entity ever has. Sooner or later you can bet they’re going to let the price
of silver run higher. As high as they possibly can. With the COMEX silver
fraud, the list of those keeping the real facts in the dark is a mile long.
Pitted against the insiders intent on keeping the COMEX silver fraud in the
dark are mining companies and silver investors, the vast majority of which
don’t have a clue about the fraud. In this group are those who denied the
silver manipulation early on and can’t face up to admitting they were wrong
even as compelling new data proving fraud roll in. The surest proof of the
COMEX silver manipulation fraud is the refusal of the insiders to openly
discuss it.

The CFTC refuses to answer or refute allegations, like JPMorgan never taking
a loss in shorting COMEX silver and the fact that JPM has been the leading
short seller while amassing more physical silver than any entity in history.
And JPMorgan and the CME Group are so intent on keeping the real facts under
wraps that both shrug off public allegations of criminal behavior that would
normally bring charges of libel and slander were the allegations not true.
Let me be clear, both JPMorgan and the CME Group are stone-cold crooks when
it comes to silver.

Wade says, "Many of the smaller silver mines have shut down. The larger
ones that are still operating are letting their silver reside in doré bars
and derive income from copper and base metals. Jamie is one up on Auric
Goldfinger in that he needs no nukes to increase the value of his silver
stockpile - not with all those bought-and-paid-for Jew politicians! That,
along with buying silver eagles and maple leafs on the sly and melting
them down into 1000/oz bars. If Jamie is not a Jew, I cannot see a good
reason why he shouldn't be one!"
Top

The woman's husband doesn't look white in this cartoon: 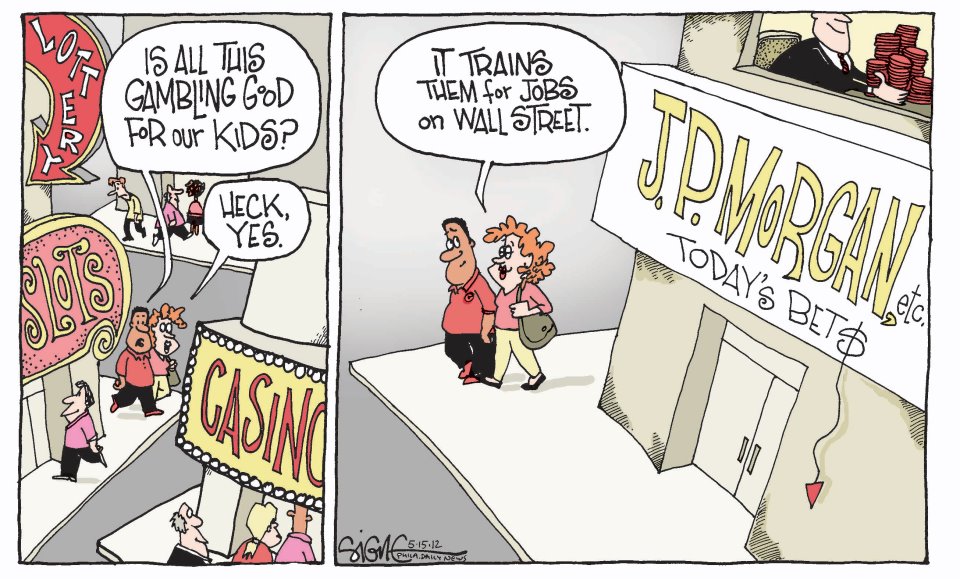 Wade inquires....
"Perhaps there is something here on how to maintain the ongoing
criminal artificial suppression of physical precious metal prices
with phony paper financial instruments? Just asking. Jamie?"

For the past few weeks, I’ve been intensely focused on what I believe to
be a double cross in COMEX gold futures by JPMorgan of other trading
entities, particularly other commercial participants. I would define
the double cross as JPMorgan positioning itself so flawlessly so as
to be nearly perfect in its execution, including the avoidance of any
widespread knowledge of what has occurred. After all, a double cross
always includes the element of surprise and this one promises to be
a doozy.