The MSM has been pelleting my news feed with "scary" numbers about the covid for the last few weeks, to justify Cooper (our crooked Gov) not opening the schools and other businesses. 10 hrs ago today I found this lovely gem that said, lo and behold when they changed their classification of recovered; 70% of Catawba co. Covid patients were considered recovered!! Fact sheet below.

Please compare these numbers to our 2017 leading causes of death and tell me what the hell we were on lockdown and trying to destroy small businesses for? If not a nefarious Jew ploy to make huge sums on the stockmarket and justify bailout funds.

Grimork wrote: ↑
Thu Jul 16, 2020 7:45 am
The MSM has been pelleting my news feed with "scary" numbers about the covid for the last few weeks, to justify Cooper (our crooked Gov) not opening the schools and other businesses.

You're right to be suspicious of what you are fed by controlled media.

I get my news from trusted sources like NationalVanguard.org and similar sites.

You can't get much more Jewish in MSM than the Jew-owned New York Times. Isn't it great that it took a Jewess to expose just how crooked is the Times? Like she's reporting something we didn't already know.
---

The paper has lost sight of its "deepest responsibility to make readers think".

A brilliant writer, winner last year of the National Jewish book award for How To Fight Anti-Semitism and staff editor for the op-ed section of the New York Times, she has this week regretfully sent in her letter of resignation in light of her recognition that the self-proclaimed “newspaper of record” no longer has room for journalists who refuse to fall in step with the far-left political narrative that has now become the New York Times Bible.

Weiss’s announcement follows shortly after the departure of editorial page editor James Bennett – another resignation that illustrates precisely the kind of new McCarthy-like policy that today governs a newspaper which once laid claim to our esteem for seeking truth and open inquiry.

Bennett permitted for publication an op-ed piece by Senator Tom Cotton that diverged from the Times’ approach to the post George Floyd riots that have so far been responsible for the deaths of at least 22 people. Senator Cotton expressed an opinion that reasonable people can debate; he agreed with the President that it was a good idea to send in the National Guard to maintain and restore order. He argued that the Insurrection Act could be invoked to deploy the military across the country to assist local law enforcement. And that was anathema to the current groupthink of the Times. As Bari Weiss notes, “It took the paper two days and two jobs to say that the Tom Cotton op-ed ‘fell short of our standards’” – and actually apologized for publishing it.

It was in 1896 that Adolph Ochs described the philosophy that would guide his newspaper and make it a paradigm for honest journalism: “To make of the columns of the New York Times a forum for the consideration of all questions of public importance, and to that end to invite intelligent discussion from all shades of opinion.”

Today’s readers need to know that that is no longer official or even permitted policy.

Opinions only have a right to be heard if they agree with the established orthodoxy of the publisher. The free exchange of ideas is not an ideal; it is a forbidden invitation to readers to come to their own erroneous conclusions.

As Weiss put it, “The Times has embraced the idea that truth isn’t a process of collective discovery, but an orthodoxy already known to an enlightened few whose job is to inform everyone else… Intellectual curiosity – let alone risk-taking – is now a liability at the Times. If a person’s ideology is in keeping with the new orthodoxy, they and their work remain unscrutinized. Everyone else lives in fear of the digital Thunderdome. Online venom is excused so long as it is directed at the proper targets. Standing up for principle at the paper does not win plaudits. It puts a target on your back.”

Bari Weiss had another reason for having a target placed on her back. She was the victim of “constant bullying by colleagues who disagree with my views. They have called me a Nazi and a racist; I have learned to brush off comments about how I’m ‘writing about the Jews again.’” 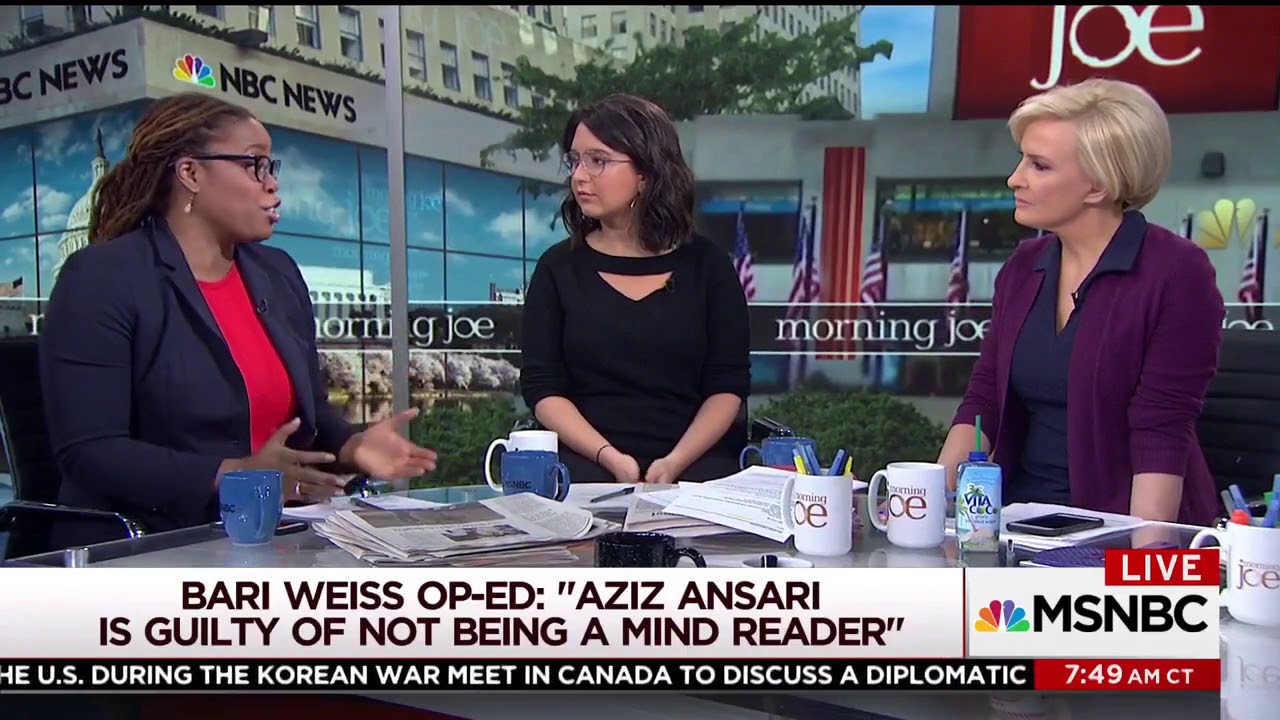 Ms. Bari, flanked by a couple of her "center-right" buddies

How utterly amazing to be accused as both a Nazi as well as a too ardent supporter of Israel.

Last week the Times offered us yet another op-ed that apparently “met their standards.” Peter Beinart's essay, “I No Longer Believe in a Jewish State”, beautifully echoed the paper’s intense antipathy to Israel as well as its ongoing prejudicial reporting.

The paper also had no problem a while back giving a half-page op-ed to arch terrorist Marwan Barghouti – a criminal serving five consecutive life terms after being convicted in an Israeli criminal court of premeditated murder for his role in terrorist attacks that killed five people – to author a diatribe against the Israeli system of justice. Just to make certain readers could identify the writer the article concluded with this note: ““Marwan Barghouti is a Palestinian leader and parliamentarian.”
---
More here from the rabbi: https://www.aish.com/ci/s/Bari-Weiss-an ... Times.html

For those interested in Ms. Weiss's book on how to fight anti-Semitism, reviewed here in the Times last year before she turned on her employer:
---

The Persistence of the Oldest Hatred

[Book review:] HOW TO FIGHT ANTI-SEMITISM
By Bari Weiss

Bari Weiss has written what must be judged a brave book. That it must be is a badge of shame for the “progressive” America with which she identifies.

Should it call for courage for a politically liberal American Jew like Weiss to point out that Jews, though a tiny percentage of the population of the United States, are the victims of over half of its reported hate crimes? That anti-Jewish rhetoric, once confined to right-wing extremists, now infests the American left, too?

Should someone like Weiss, an editor and opinion writer at The New York Times, have to expect brickbats from her colleagues for observing that a vicious demonization of Israel and its supporters has become routine in much of the American left and endemic on college and university campuses? That whatever its failings, Israel is a remarkable human adventure that deserves at least as much sympathy as criticism? That it is only natural for a Jew to care deeply about a Jewish state’s welfare and survival? That Jewish solidarity is as legitimate as any other form of human solidarity?

Should she have to fear ostracism or damage to her journalistic reputation for pointing out that anti-Zionism and anti-Semitism, while theoretically distinguishable, have long merged into a single ugly phenomenon? Or that it is obscene, less than a century after the Holocaust, to class Jews with their historical “white oppressors”?
---

Or that it is obscene, less than a century after the Holocaust, to class Jews with their historical “white oppressors”?

Lol, yes tell me about that history of us oppressing the Jews.

My cell phone automatically gives me a news feed which is mostly full of MSM trash. Sometimes there is useful information about local events and what not, but usually garbage.

That covid story was from the hickory daily record, a local paper. It amuses me that the updated number of covid deaths so far is less than half the number of North Carolinians who died from stroke in 2017 for example. Crooked Gov Cooper still thinks it's unsafe to open schools normally this year and has chosen a part physical, part online education "strategy". Even though the remote learning is supposedly really hurting students learning capabilities. I am considering homeschooling my daughter when the time comes and bypassing this whole mess altogether.
Top

If anyone is interested, here is MY
solution to the government-mandate
wearing of "Covid-19 masks:"

Will Williams wrote: ↑
Tue Jul 28, 2020 6:05 pm
Wearing a mask to prevent a virus is like putting
up a chain link fence to stop mosquitos

By now it should be obvious to all - except
for cowards and the mentally retarded -
that the entire "virus" con game is all
about control!
Top

A new video that was released just yesterday
by Doctor Ron Paul, over at the "Ron Paul
Liberty Report" that is an absolute must see
by everyone... In this video, entitled: "When
Will COVID Tyranny End? W.H.O Director: Never,
Unless..." Ron Paul does indeed answer so many
key questions about this entire 'pandemic' and
once again points to the facts that this is
such an overblown scam.... Here is that video....

...and adds to the fact that this 'director'
of the criminal WHO is NOT a doctor at all, but
is and/or was the head of the Ethiopian COMMUNIST
PARTY, and thus has that type of sicko mentality
that he is using in this entire scam-demic!
70181

Wade Hampton III wrote: ↑
Wed Jul 29, 2020 12:31 pm
A new video that was released just yesterday
by Doctor Ron Paul, over at the "Ron Paul
Liberty Report" that is an absolute must see
by everyone... In this video, entitled: "When
Will COVID Tyranny End? W.H.O Director: Never,
Unless..." Ron Paul does indeed answer so many
key questions about this entire 'pandemic' and
once again points to the facts that this is
such an overblown scam.... Here is that video....

Thank you for posting this Wade, I wasn't aware of Dr. Paul's channel. Good to see him still being active.
Top

Be sure to remember his point. Nineteen-eighty-four is
here. Mandatory "flu" vacs full of a money-making concoction
for big Jew pharma - which will insure an even more docile
population of Goys to be molded and shaped by "God's
holy people." I suppose this is going to be the end of the
line for me. I haven't taken any of their "flu" shots in years.
Never had the "flu." Just take the vitamins I get from VA.
I hope a Lotto win will get me out of this Mestizo and Negro-
infested "multi-culti" environment that I am stranded in, but
for now, that is neither here nor there.
Top
Post Reply
24 posts