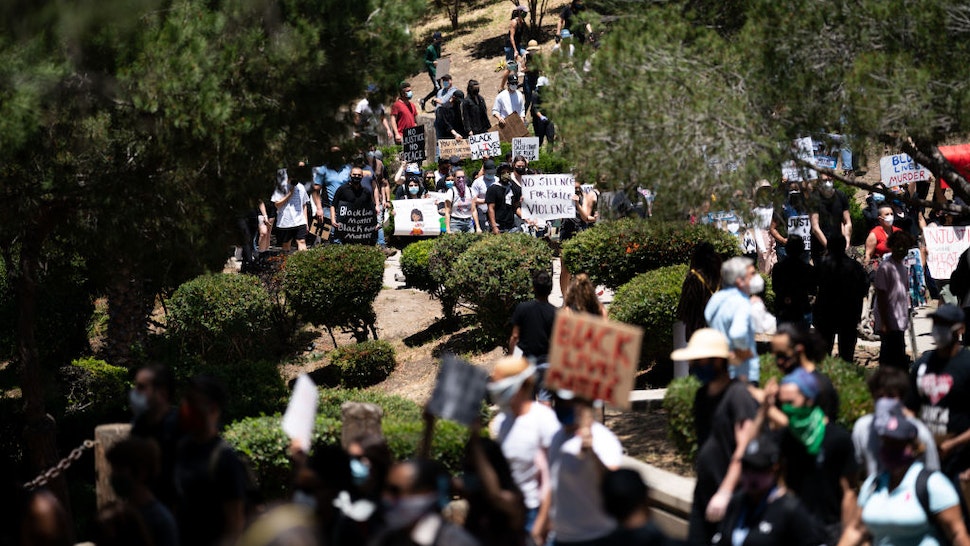 The Black Lives Matter activists who led an organizing rally in Los Angeles on Saturday afternoon condemned “killer cops,” encouraged attendees to “disrupt white capitalism,” then announced the event had “officially closed” shortly before some participants clashed with police.


#BlackLivesMatter-LA
@BLMLA
Two national demands:
1. Prosecute killer cops.
2. Defund the police.
In the name of #GeorgeFloyd and all those killed by state-sanctioned violence. #BlackLivesMatter

1,889
6:00 AM - May 31, 2020 · Los Angeles, CA
Twitter Ads info and privacy
566 people are talking about this
Thousands met at Pan Pacific Park in the city’s Fairfax District “to organize and build power,” event planners said. The Black Lives Matter-led gathering was held “in the name of George Floyd and the 601 people murdered by police in L.A. County since 2012.” Floyd, a 46-year-old black man, died on March 25 while being arrested by a white Minneapolis police officer. The circumstances of his death have sparked nationwide protests against police brutality and racism that have sometimes descended into lawlessness.


Organizers led attendees to the busy intersection of 3rdStreet and Fairfax Avenue, near a popular high-end retail mall called The Grove. Demonstrators blocked traffic as the rally continued. Black Lives Matter co-founder Patrisse Cullors explained the location’s significance over a bullhorn, describing it as “the shopping industry” and “the heart of capitalism.”

Dr. Melina Abdullah, lead organizer of Black Lives Matter’s L.A. chapter, led call and response chants of “disrupt white capitalism,” a concept she believes is the root cause of police violence in America. Abdullah, who is also a college professor, went on to drop a string of expletives that seemingly foreshadowed what was to come after the rally would end.


By nightfall, stores at every shopping district Abdullah mentioned had been vandalized and looted, and several LAPD cruisers in the Fairfax District were reportedly set on fire.

Abdullah’s 16-year-old daughter, Thandiwe, also addressed rallygoers. She co-founded the Black Lives Matter Youth Vanguard and has been speaking at local protests for several years. In 2018, she was honored by Time Magazine as one of the most influential teens in the country.

Organizers ended the rally while it was still peaceful, acknowledging the situation could potentially become unsafe for some folks in attendance.

“We ain’t saying y’all have to go home, but there’s a lot of youth and vulnerable people out here that should definitely leave,” a Black Lives Matter leader said over the bullhorn. “The action is officially closed,” he announced. “Whatever y’all do from here on out ain’t my business.”

According to CBS2, “tensions began to rise” after “the protesters began moving toward Beverly Hills” and other areas.” They were met by LAPD, which issued an unlawful assembly order and instructed participants and onlookers to leave. The L.A. Times described the scene that developed as “a tense standoff” with “police shooting rubber bullets and striking demonstrators with batons.”


Matt McGorry
✔
@MattMcGorry
More police brutality from the @BLMLA @WeBldPwr protest yesterday where cops starting swinging batons and shooting projectiles at people simply standing there with there hands up.

Embedded video
2,167
5:12 PM - May 31, 2020
Twitter Ads info and privacy
1,456 people are talking about this
Sampson, who helped organize the rally with Black Lives Matter, claimed the police instigated the altercation, alleging “some of the agitators in the crowd were plainclothes LAPD.” He broadcasted video excerpts on social media and tweeted, “I actually got hit 7 times with rubber bullets and many with batons.”

LAPD asked the public to avoid the vicinity as other violent protests emerged in the neighborhood. Several shops in the surrounding area were later looted, and officials implemented a citywide curfew that night.