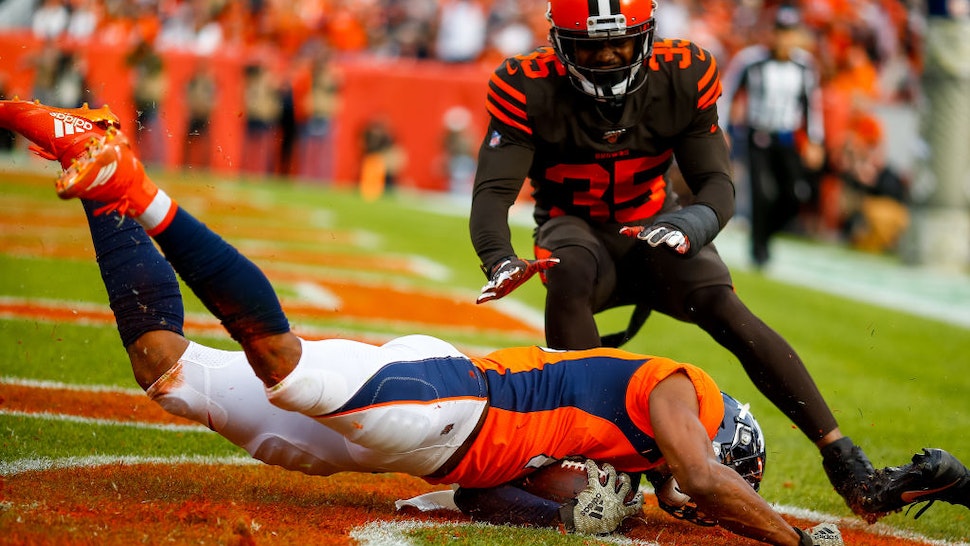 On Sunday, shortly after the Cleveland Browns suffered a 24-19 loss to the Denver Broncos, Browns safety Jermaine Whitehead reportedly issued a series of tweets threatening his critics, as ESPN reported. Whitehead was reportedly still in full uniform, according to Zac Jackson of The Athletic, who wrote, “One thing guys: Browns PR was absolutely right to get Whitehead out of there and not let him say anything (else) he might regret. So don’t blame them. He was still in full uniform while he was sending the tweets,” as the Complex noted.

Zac Jackson
✔
@AkronJackson
One thing guys: Browns PR was absolutely right to get Whitehead out of there and not let him say anything (else) he might regret. So don’t blame them. He was still in full uniform while he was sending the tweets.

TOP ARTICLES
1/6
READ MORE
Gabbard On Impeachment Inquiry ‘Yes’ Vote: I Did It For ‘Transparency’

Jackson also wrote that a team official, in a conversation loud enough to be heard across the locker room, asked Whitehead to delete the tweets, but Whitehead refused. As Yahoo News reported, “The Twitter account is not verified, but the Browns issued a statement Sunday evening acknowledging the posts were made by Whitehead.”


During the game, Broncos tight end Noah Fanta slammed Whitehead to the ground as he dashed to a 75-yard touchdown. Whitehead, who was playing with his left hand in a brace, also missed a tackle on another play that gained the Broncos big yardage. He had no tackles in the game.

The miscues drew criticism of Whitehead on social media; former NFL player Dustin Fox slammed him on a postgame show for the Browns radio network.

After Fox tweeted, “Whitehead’s effort tackling today is a joke,” Whitehead tweeted back, “Come get it in blood b**** made a** little boy. I’m out there with a broke hand .. don’t get smoked f*** a** cracker.”

Whitehead’s Twitter account was suspended before he left the locker room. The Complex noted that Whitehead started at the safety position on Sunday because Damarious Randall has been dealing with a injured hamstring..

The Browns issued a statement regarding Whitehead’s actions, saying, “Jermaine Whitehead’s social media posts following today’s game were totally unacceptable and highly inappropriate. We immediately spoke with Jermaine upon learning of these comments. The Browns in no way condone that type of language or behavior. This matter will be further addressed internally.”

Crazy world. They line it up and say anything in the book too you. They tell you take the high road, when yo whole life you was taught to meet fire with fire. I do apologize for my performance, but having a broke hand and a strong fear of letting my team down is my downfall. Whatever happens happens. Ain trippin. They probably gone still talk crazy but this me getting smoke off my chest. I don’t need one like.. this from me to me! Keep ya head up homie, can’t nobody fuck with you. I dare em to try.

Negroes playing ball and tweets are distractions from what's important.

Who really cares about either?
Top

Will Williams wrote:Negroes playing ball and tweets are distractions from what's important.

Who really cares about either?

I do agree with you 100% - no doubt about that. However - I still thought it made a good story to post on this forum due to the fact that it is an example a privileged negro unmasking his true inner negro.
Professor of Anti-White Discrimination and Racial Hypocrisy
Top
Post Reply
3 posts • Page 1 of 1