Just did a search for 'el paso shooting' on the 'Net since TV news is yammering about a "white identitarian" shooting a bunch of Mexicans down on the border. Facts of the matter will be revealed eventually.

There is something being reported about a manifesto the boy, identified as Patrick Crusius, who was captured alive, wrote. "A number of social media profiles for the arrested shooter have been found on Facebook, LinkedIn, Instagram, and Twitter."

That appears to be the problem: social media. I wouldn't know about any of those. WhiteBiocentrism is social media enough for this White boy.

There's talk about Patrick's attraction to "white suprematism," whatever that is, and something about "gamification of terror," whatever that is. Apparently Patrick is opposed to race-mixing, which is not a crime...yet. 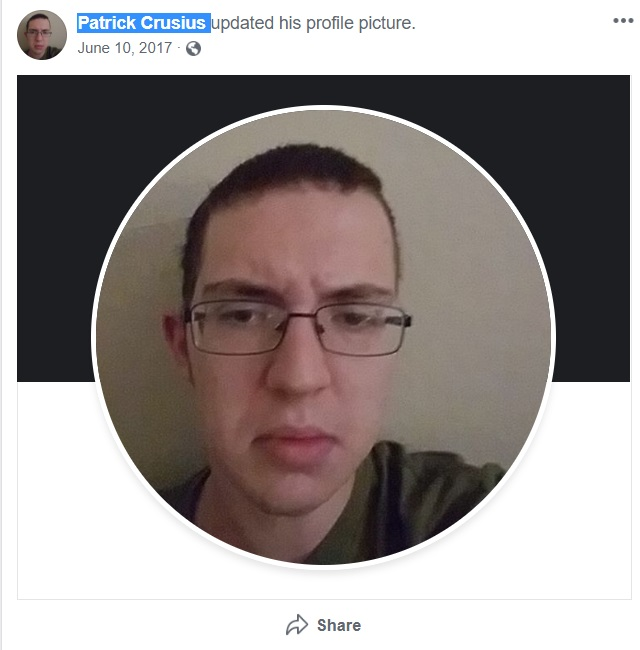 Patrick, after chomping on an unripe persimmon
Wait, this may be part of Patrick's manifesto:

Patrick seems to be making a strong, if naive and simplistic case for separation of races, then he thinks all this so-called white suprematism and gamification goes away.
Top

As with Tim McVeigh, he's another soldier without any real leadership and he just threw his young life away.
Contact me via PM to obtain quantities of the "Send Them Back" stickers.
Top

They definitely could have used a more recent picture of the lad.

I'm not sure what to think of this incident. A supposed frequent 4/8chan user, his manifesto (read/download it here) lacks anything to do with jews. Every serious *chan user who isn't a shill or troll knows that jews and their advocates are the real ones responsible for propagating and festering on the societal decay. To me, this tells me that Patrick Crusius is a White Nationalist who has limited understanding of the situation we're in, or that he's a civic nationalist (potentially with a jewish background?) who deliberately ignored mentioning anything about (((them))).

Conspiracies and disinfo is already circulating about the alleged shooter and his family.
jew, evangelist, potayto, potahto.jpg (12.24 KiB) Viewed 652 times

The one thing I will say that I entirely agree with his writing is that "INACTION IS A CHOICE". Every day that we do nothing to promote our interests of not only racial survival but racial growth and improvement is a day of defeat. We do not have the luxury of time on our side. I am not endorsing anyone reading this to become a mass murderer/spree killer (although if you do, mention something about the hebes in your manifesto. will ya?). While we are all partisans of war against enemies of our race, there is a time and place for everything. These publicized shootings further fuel tension between us and our enemies -- forcing fence-sitters to pick a side in the process -- but it is not tactically viable for our people to lash out in frankly an immature and disorganized manner. We need to spread the truth and form networks and communities of our extended racial families. With these kind of supports, we will have far fewer emotional outlashings like this, and far more warriors.

Good, Zack. I can't confirm if John ‘Bryan’ Crusius, LPC, LPC-S is Jewish. but I believe it was mentioned that Junior is from the Dallas area, so this is probably Senior, who is into something called infusion therapy to help folks with their addictions. http://www.dallasaddictionrecoverythera ... usius-lpc/

I seem to recall reading that Junior wanted to go out in a 'suicide by cop' scenario because his family would be upset with his deed and he wouldn't want to face them afterwards, should he survive. Sounds to me like Senior failed somewhere along the line to properly counsel Junior.
Top

A huge thread on Stormfront about this shooting.
It seems that the tinfoil hats come off and conspiracy theories abound plus completely retarded posts seem to appear.
Moderators have to keep checking.
I thought this post interesting that these two look like they're related and not for the conspiracy theory •••

https://www.stormfront.org/forum/showth ... tcount=161
It's not diversity, it's displacement.
Top

PhuBai68 wrote:A huge thread on Stormfront about this shooting.
It seems that the tinfoil hats come off and conspiracy theories abound plus completely retarded posts seem to appear.
Moderators have to keep checking.
I thought this post interesting that these two look like they're related and not for the conspiracy theory •••

I never heard of the "Garlic Shooter" until now. They do look like twin brothers, don't they?

Yes, the conspiracy nuts come out of the woodwork over at SF and elsewhere when these shooting take place. Re: Conspiracy theories and their promoters

PhuBai68 wrote:A huge thread on Stormfront about this shooting.
It seems that the tinfoil hats come off and conspiracy theories abound plus completely retarded posts seem to appear.
Moderators have to keep checking.
I thought this post interesting that these two look like they're related and not for the conspiracy theory •••

It appears the FBI is going way out on a limb itself.

The FBI for the first time has identified fringe conspiracy theories as a domestic terrorist threat, according to a previously unpublicized document obtained by Yahoo News. (Read the document below.)

The FBI intelligence bulletin from the bureau’s Phoenix field office, dated May 30, 2019, describes “conspiracy theory-driven domestic extremists,” as a growing threat, and notes that it is the first such report to do so. It lists a number of arrests, including some that haven’t been publicized, related to violent incidents motivated by fringe beliefs.

The document specifically mentions QAnon, a shadowy network that believes in a deep state conspiracy against President Trump, and Pizzagate, the theory that a pedophile ring including Clinton associates was being run out of the basement of a Washington, D.C., pizza restaurant (which didn’t actually have a basement).

The FBI said another factor driving the intensity of this threat is “the uncovering of real conspiracies or cover-ups involving illegal, harmful, or unconstitutional activities by government officials or leading political figures.” The FBI does not specify which political leaders or which cover-ups it was referring to.

President Trump is mentioned by name briefly in the latest FBI document, which notes that the origins of QAnon is the conspiratorial belief that “Q,” allegedly a government official, “posts classified information online to reveal a covert effort, led by President Trump, to dismantle a conspiracy involving ‘deep state’ actors and global elites allegedly engaged in an international child sex trafficking ring.”

This recent intelligence bulletin comes as the FBI is facing pressure to explain who it considers an extremist, and how the government prosecutes domestic terrorists. In recent weeks the FBI director has addressed domestic terrorism multiple times but did not publicly mention this new conspiracy theorist threat.
<snip, read rest at link above.>

Contact me via PM to obtain quantities of the "Send Them Back" stickers.
Top

Both of these are false flags! The Jew media bosses
have sensed the collective pulse of the dumbed-down Goyim and
believe the time is right for doing away with the Second Amendment.
I can cite other Internet resources that have come to the same
conclusion, but no need as anyone with any common sense can
see it coming. Several shooters were involved, and of course
some dead bodies here and there for "genuine proof" for the
unconvinced. Now we have The Donald stepping in right on
cue to savor the moment....all part of "making America
great again."

Wade Hampton III wrote:Both of these are false flags!

You say that with such conviction, Wade. I don't believe it.

I know little about that Ohio shooter except he killed his sister and shot the other person who rode with them to wherever the shooting took place. Maybe he hated his sister? He must have. That would make it a hate crime for certain, but not a "false flag" -- just another excuse for controlled media and anti-White groups to beat their drums against law abiding White loyalists/dissidents.

You say "several shooters were involved." Provide proof, and not from the same Internet sources that claim the shootings are false flags. The reasons these kids do these deeds is the alienation they feel, among other things that are probably revealed on their "social media" accounts. These are signs of the times in an increasingly multi-racial society where Whites are being replaced by non-Whites. Anyone with common sense can see that.

The Jew media bosses
have sensed the collective pulse of the dumbed-down Goyim and
believe the time is right for doing away with the Second Amendment.
I can cite other Internet resources that have come to the same conclusion...

Save 'em. Go discuss this there. White Biocentrism isn't the place to vent those false flag theories, thanks.
Top

↑↑↑
Yeah Will,
We've been getting all the conspiracy theorists posting their "proof" on a couple Stormfront threads.
One the big "proofs" seems to be someone with this Dayton shooter's same name died X many decades ago so it "has to be" a false flag action - by who? - of course.
It's not diversity, it's displacement.
Top
Post Reply
19 posts