Luis Rodrigo Perez, was released from the Middlesex County Jail in New Jersey in February of this year (despite Immigration and Customs Enforcement seeking to detain him, according to an ICE press release). He was being held in the jail during December of last year after being charged with domestic violence.

According to police documents, Perez shot and killed two of his former roommates, Steven Marler and Aaron Hampton, at their home in Springfield on Nov. 1. He also wounded two others but they survived. A day after killing Hampton and Marler, Perez allegedly shot and killed Sabrina Starr (who was with him for the first two murders) at her house, the documents say.

The illegal immigrant had additional help in completing these alleged murders. Aaron Anderson was charged as an accomplice with two counts of first-degree murder. According to AP:

Aaron Anderson, 19, told investigators that he was waiting with Starr in an SUV outside Hampton and Marler’s home when Perez shot them. Anderson said he was on the phone with Perez at the time and that he could hear the victims 'begging for their lives.'

There is no known motive for the shootings, at this time. But it should be noted that Perez and Anderson were recently kicked out of Hampton and Marler’s home.

Perez’s girlfriend, Dalia Garcia, was also involved. She has been charged with tampering with evidence and is in jail on a $75,000 bond.

According to the ICE press release, Perez has a known violent history and that left federal authorities to wonder why the ICE detainer was not honored.

“Yet again, an ICE detainer was ignored and a dangerous criminal alien was released to the streets and is now charged with killing three people,” said ICE Acting Executive Associate Director Corey Price. “Had ICE’s detainer request in December 2017 been honored by Middlesex County Jail, Luis Rodrigo Perez would have been placed in deportation proceedings and likely sent home to his country – and three innocent people might be alive today. It is past time that localities realize the perils of dangerous sanctuary policies and resume their primary goal of protecting their residents.”

Lamentably, the era of social media allows us to peer into the private lives of those who momentarily are in the news.

People we would never meet in our lives become available to us, pictures (and sometimes videos) of all their years conveniently captured and catalogued for their family and friends.

His name is Alexander Mixon. He married Taylor Paige Mixon on June 6, 2017.

He was a white man, merely doing his job. His wife is now a widow, courtesy of six black men. [Victim lured to bogus address in Saturday homicide; several arrested, WALB.com, 11-24-18]:
Several arrests were made in a homicide that took place Saturday, according to the Albany Police Department (APD). 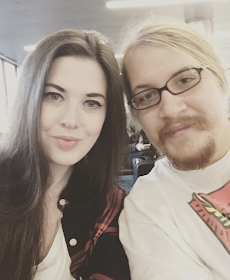 Her Name is Rebecca Pletnewski/ Her Name is Olivia Schneider: White Mother and Her Eight-Year-Old Daughter Murdered by Black Neighbor

On July 14, 2016, then 39-year-old Rebecca Pletnewski changed her profile picture on Facebook to a statement. Dominique C. Swopes, 27, faces two counts of aggravated murder and aggravated arson.
Police said Rebecca Pletnewski, 41, was stabbed to death before her home on Longwood Road was set on fire on Tuesday. Firefighters pulled her daughter, 8-year-old Olivia Schneider, from an upstairs bedroom. She was pronounced dead from smoke inhalation at the hospital.
Shortly after the blaze, Swopes was detained for questioning and later released."He became a subject of interest that day because what family and friends had told us, that Rebecca had warned them or told them of instances of potentially stalking by the neighbor," said Police Chief Fred Bittner. "He became our primary suspect at the time after talking to family." 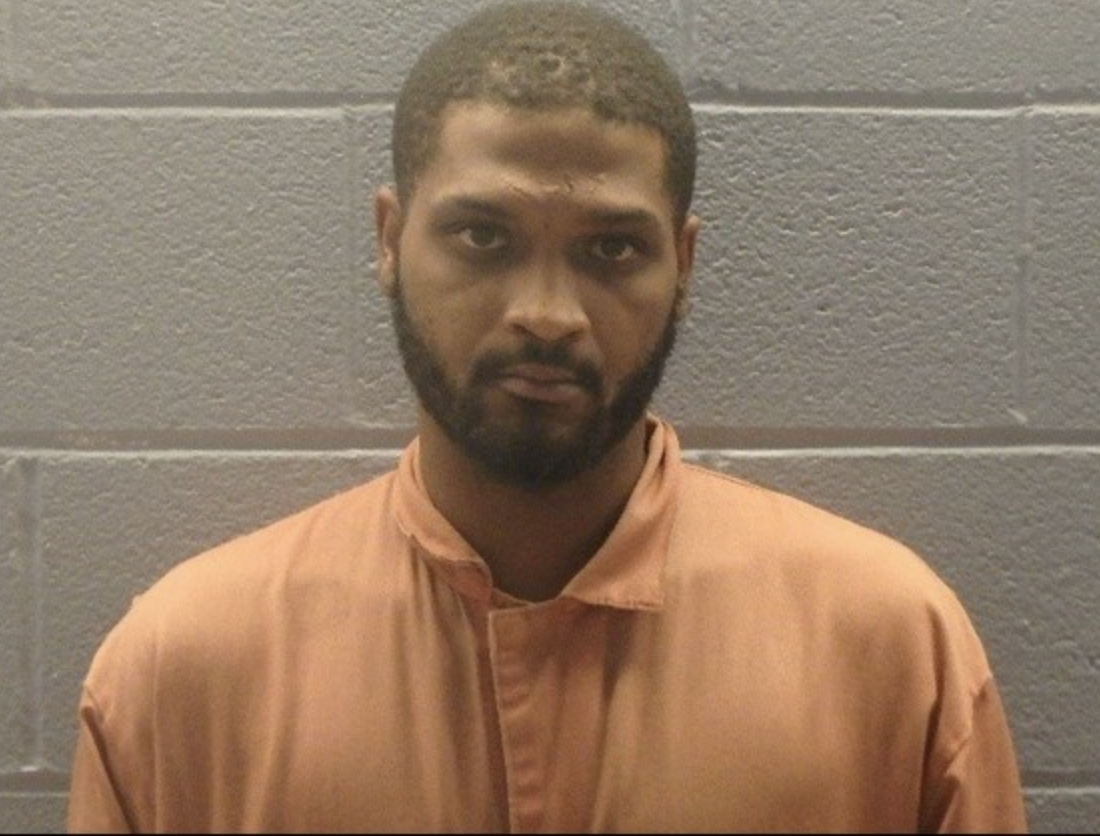 Pletnewski's family told investigators she had been worried about Swope's unwanted advances for months.
"He just apparently had left her notes occasionally or talked to her outside. There were other advancements made through maybe social media, and she told him she didn't want anything to do with him, she had a boyfriend," Bittner said.
Pletnewski, an intensive care nurse at University Hospitals Cleveland Medical Center, and Schneider, a third-grade student at Lander Elementary, were laid to rest on Monday. A candlelight vigil is planned for Thursday night.
Pletnewski leaves behind a 4-year-old daughter, who was not home at the time of the fire.

A curious Facebook post from Rebecca she posted on July 14, 2016...
Olivia Schneider should be preparing to write a letter to Santa Claus, listing what she hoped to receive for Christmas. She should be preparing to go down the steps on Christmas morning holding her little sisters hand as they saw the presents Santa had left for them.

Instead, she was laid to rest in late November 2018, the victim of a homicide few will remember and fewer will ever hear/read about. Was her mother afraid of appearing racist by going to the police and reporting Dominique Swopes for stalking her?

In the end, it doesn't matter. Both Rebecca and her beautiful daughter Olivia are dead.

Her Name is Marybeth Gaeng: White Woman "Randomly" Stabbed to Death in St. Louis Family Dollar by Black Woman (Who Has a Lengthy Criminal History)

Marybeth Gaeng worked at The Gathering Now, as a Gathering Kids Nursery Specialist. She was a white woman of deep faith, a lifetime citizen of St. Louis and a devoted fan of the St. Louis Cardinals.

She entered a Family Dollar store to shop, a member of the white working-class mindful of her budget.

She would never the leave the store alive. 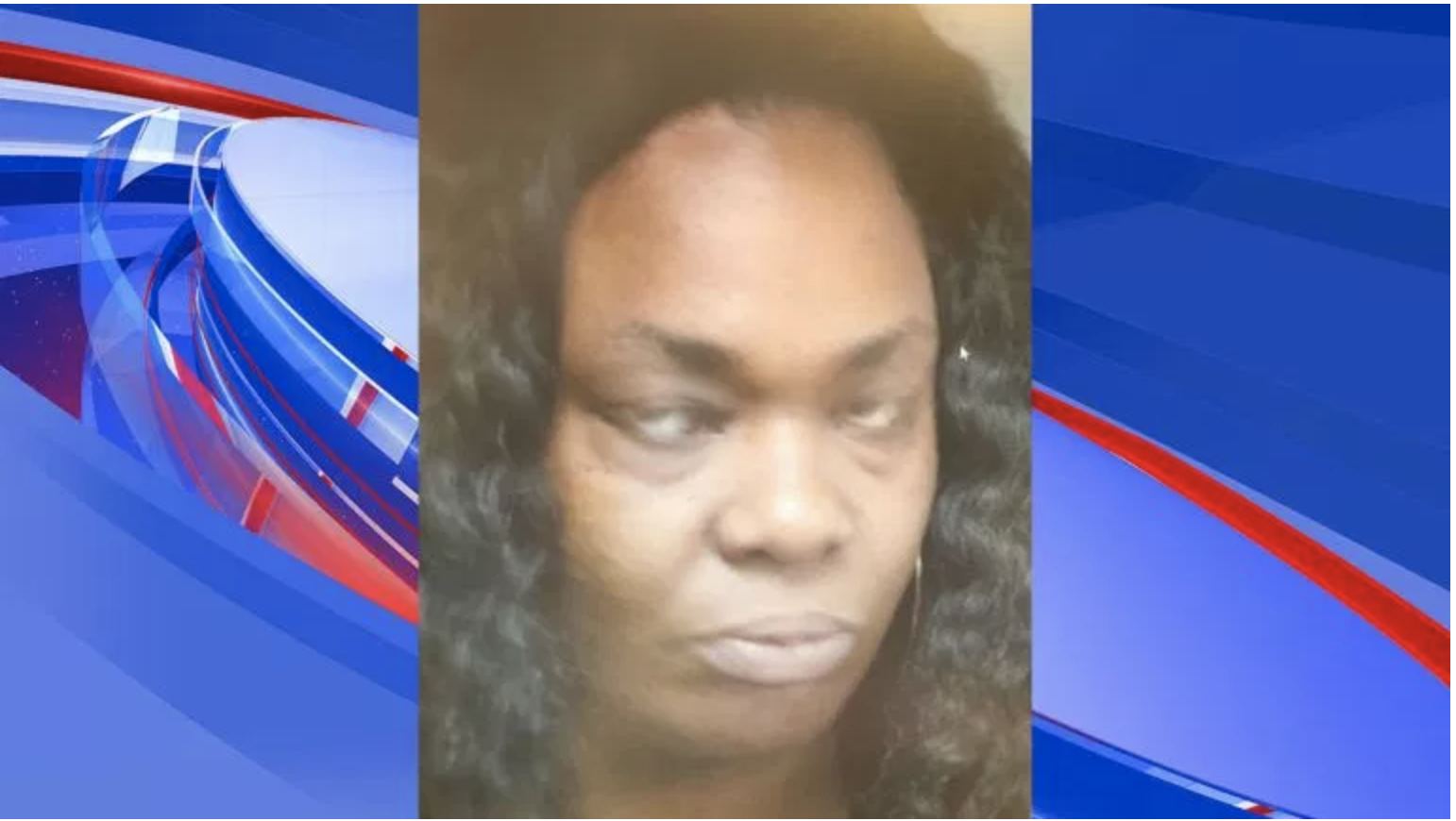 A black woman with a long history of anti-social behavior picked up a pair of scissors and stabbed Gaeng to death.

Shot. [Family Dollar shopper stabbed to death with knives plucked from store's shelves in St. Louis County, St. Louis Post-Dispatch, 11-29-18]:
A Tennessee woman grabbed two knives from the shelf at a Family Dollar store here Tuesday and began stabbing a customer in the head, fatally wounding the victim.
Cameka Cathey, 34, of Memphis, was charged with first-degree murder and armed criminal action in the attack. She is accused of stabbing Marybeth Gaeng, 65, inside the Family Dollar Store at 9730 St. Charles Rock Road.
Cathey entered the Family Dollar store and retrieved two knives from the shelf, according to court documents. She then approached Gaeng and stabbed her in the head. While employees were trying to help Gaeng, Cathey stabbed her in the head again.
Police said the two were strangers. 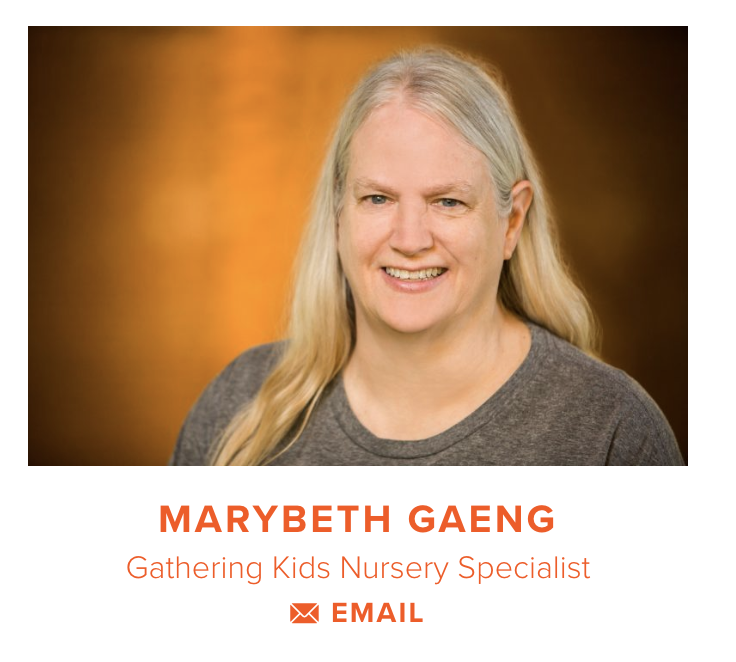 “They did not know each other,” Police Chief John Griffin said. “There was no conversation, nothing, during that time. She just approached the victim and just started stabbing the victim in the face and the head area

Her Name is Reese Bowman: Eight-Month-Old White Baby Girl Murdered by Black Day Care Worker in 70% Clack Baltimore Because "Reese Would Not Sleep."

There's nothing to say.

The world of a young white couple was shattered, completely destroyed because a black employee of a day care center in 70% black Baltimore murdered 8-month-old Reese Bowman. Leah Walden, the 24-year-old black woman who murdered Bowman, told a friend just before she suffocated the little white baby, "Girl, I’m frustrated … I’m sick of this little b---. I hate this little b--- … She makes me want to punch her in the face.” [Baltimore day care worker pleads guilty to smothering baby to death, gets 70 years in prison, Baltimore Sun, 11-29-18]:


In an emotional hearing Tuesday, a Baltimore day care worker admitted to murdering a baby girl who would not nap and was sentenced to 70 years in prison.
Her admission came during a wrenching two-hour hearing in Baltimore Circuit Court. By the end, even the judge cried on the bench. 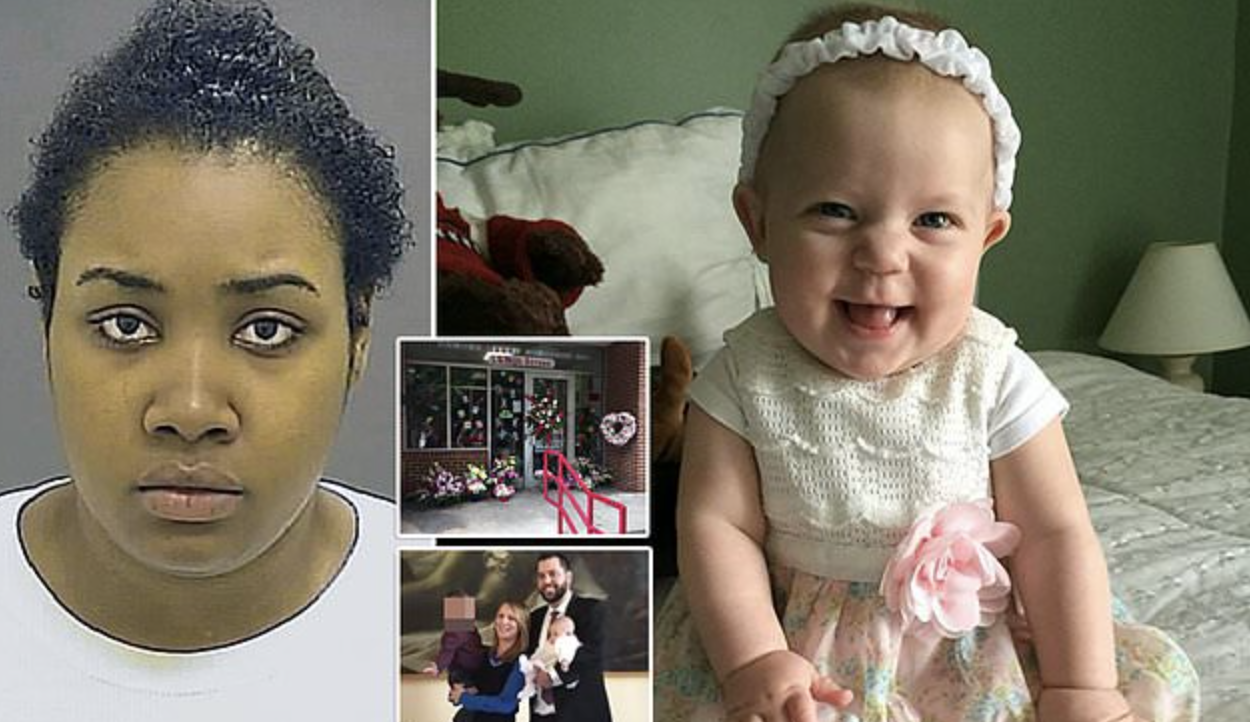 A few weeks ago, The New York Times profiled a parody "911" number for white women frightened by black males to call: 844-WYT-FEAR. 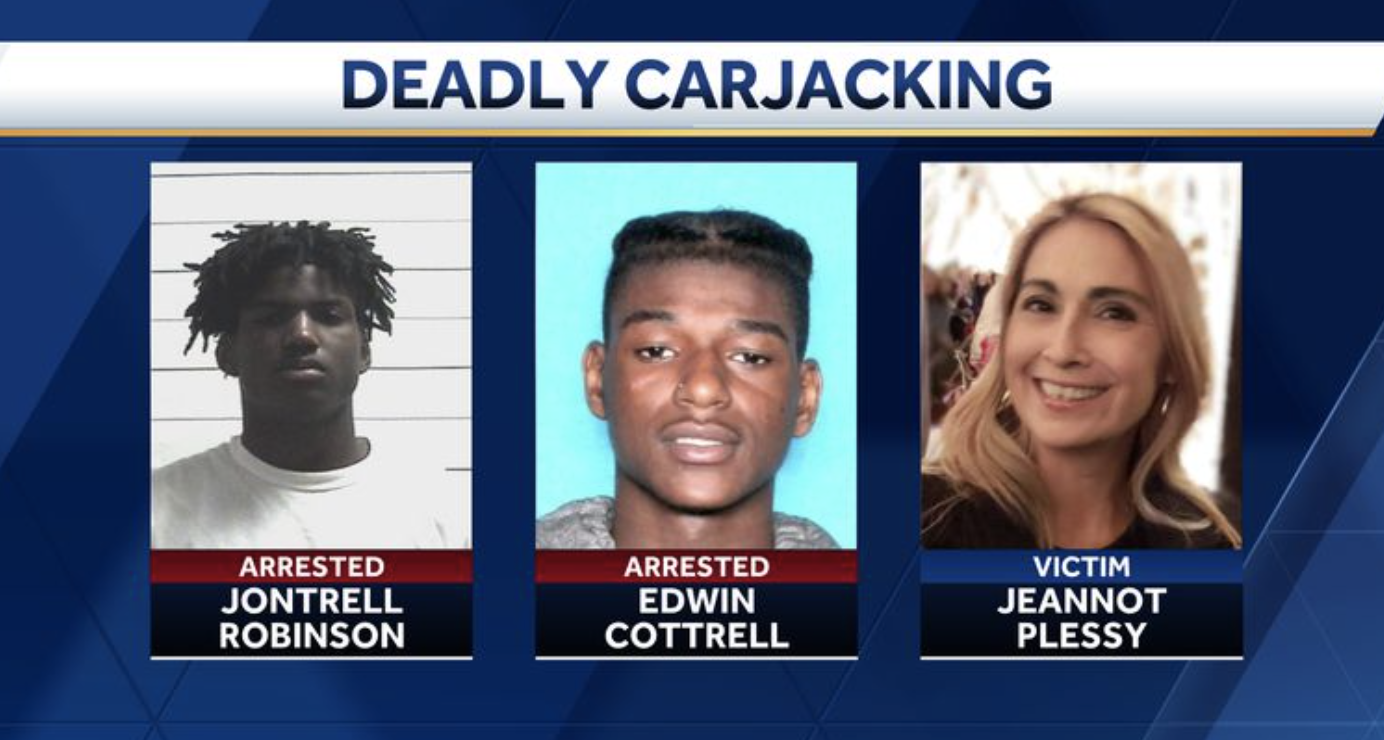 The former number is one Jeannot Franco Plessy - a 49-year-old white woman who was carjacked and murdered by three black teenagers in New Orleans - should have called. [3 Teens Arrested in Carjacking, Murder of Louisiana Pastor’s Wife, NTD.com, 12-4-18]:

Three teenagers were arrested and charged in the murder of a pastor’s wife.
Police officers said Jeannot Franco Plessy, 49, was forced out of her car and thrown to the ground outside her daughter’s house in New Orleans on Nov. 27.
The teens who took the vehicle ran over Plessy with it before fleeing the scene.
The pastor’s wife died that night from blunt force trauma suffered when she was run over.
The New Orleans Police Department said three teenagers were identified as the carjackers and arrested, identifying two of them.
Outside of New Orleans, few people will come across the name Jeannot Franco Plessy.

The Robert E. Lee Statue may have come down, but black violent crime didn't go anywhere.

Her Name is Amber Clark: White Librarian Murdered by Black Male - Who was Banned from the Library - in Targeted Execution

You walk to your car, unlock the door and get in the front seat.

But before you can even start the ignition, a black male points a gun at your head and pulls the trigger. [Library supervisor, 41, gunned down in parking lot months after altercation with suspect, police say, Fox News, 12-14-18]:


A disturbance at a Northern California library in October may have led to this week's shooting death of a 41-year-old library supervisor as she sat in her car outside the building Tuesday evening, police say.
Amber Clark was shot several times in the face and head outside the North Natomas Public Library, FOX 40 Sacramento reported. 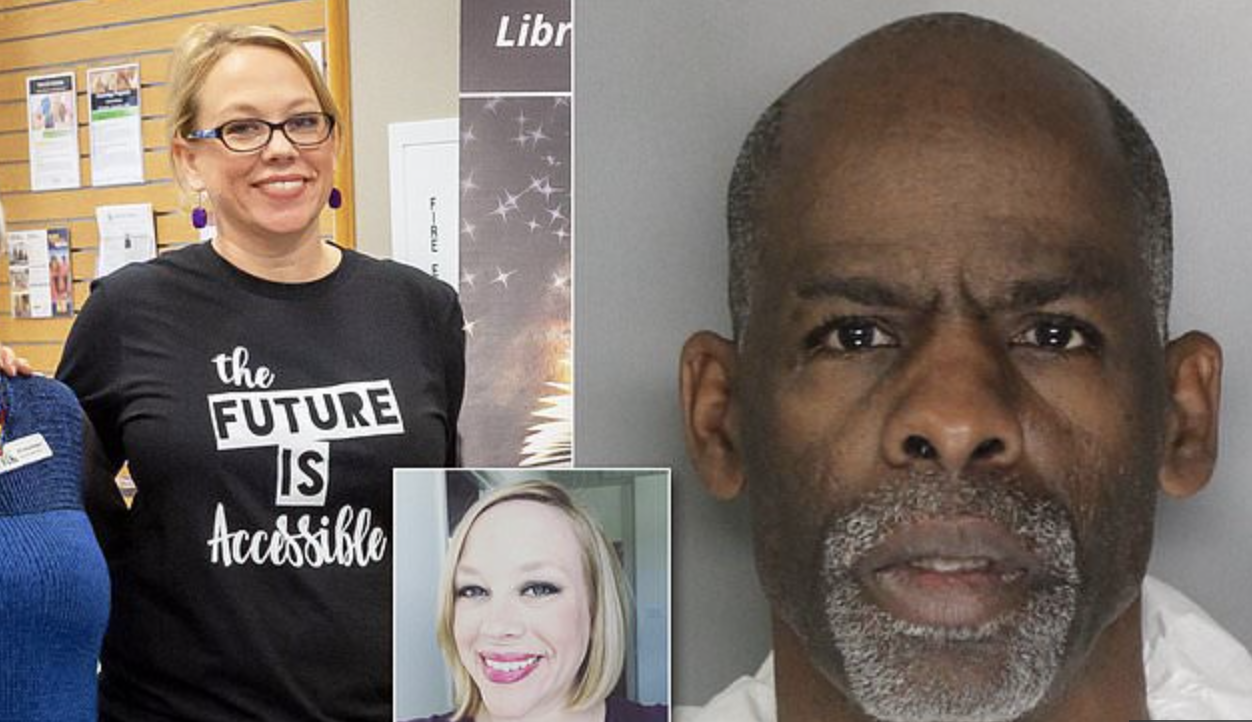 Thanks for the updates on this topic, Benjamin. These events certainly aren't seen on the national news scene, day after day after day like they would be if the races were reversed.
Contact me via PM to obtain quantities of the "Send Them Back" stickers.
Top

Jim Mathias wrote:Thanks for the updates on this topic, Benjamin. These events certainly aren't seen on the national news scene, day after day after day like they would be if the races were reversed.

You're welcome. Thanks in return - and, yes, I know.
Professor of Anti-White Discrimination and Racial Hypocrisy
Top

His Name is Roy Brown: White IHOP Employee Gunned Down by Black Career Criminal (His Son Shoots and Kills the Black Shooter)

Roy Brown was a white man. He worked at an IHOP.

So does his son.

A black man with three prior arrests - for assault with a firearm - was upset with an order.

Naturally, he pulled out a gun and started shooting. [Community offers support for family of slain IHOP worker, Al.com, 1-18-19]:
Everything looked normal on Friday at the IHOP on Huntsville’s Memorial Parkway. 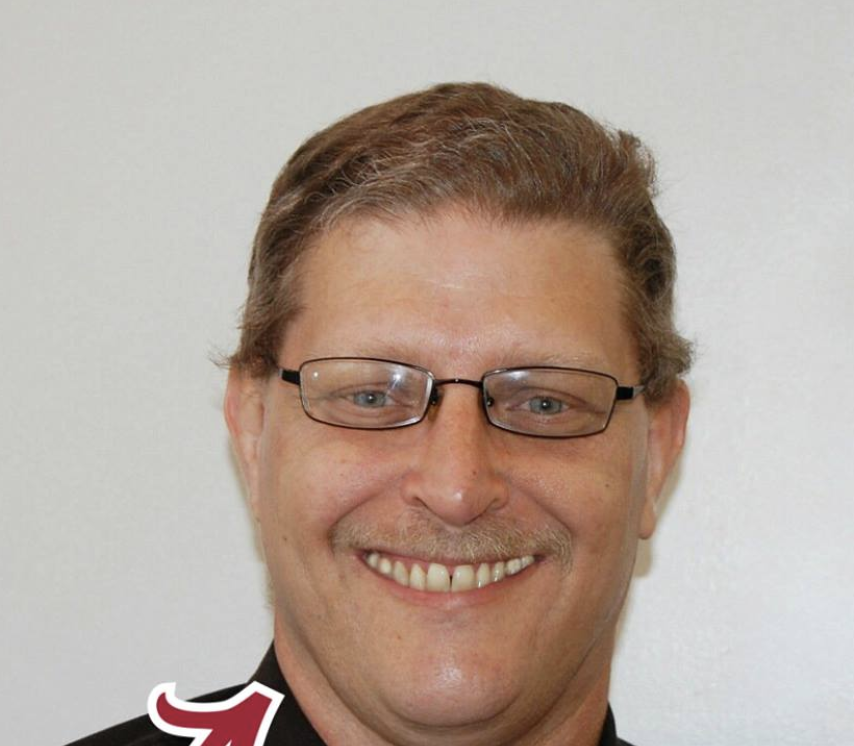