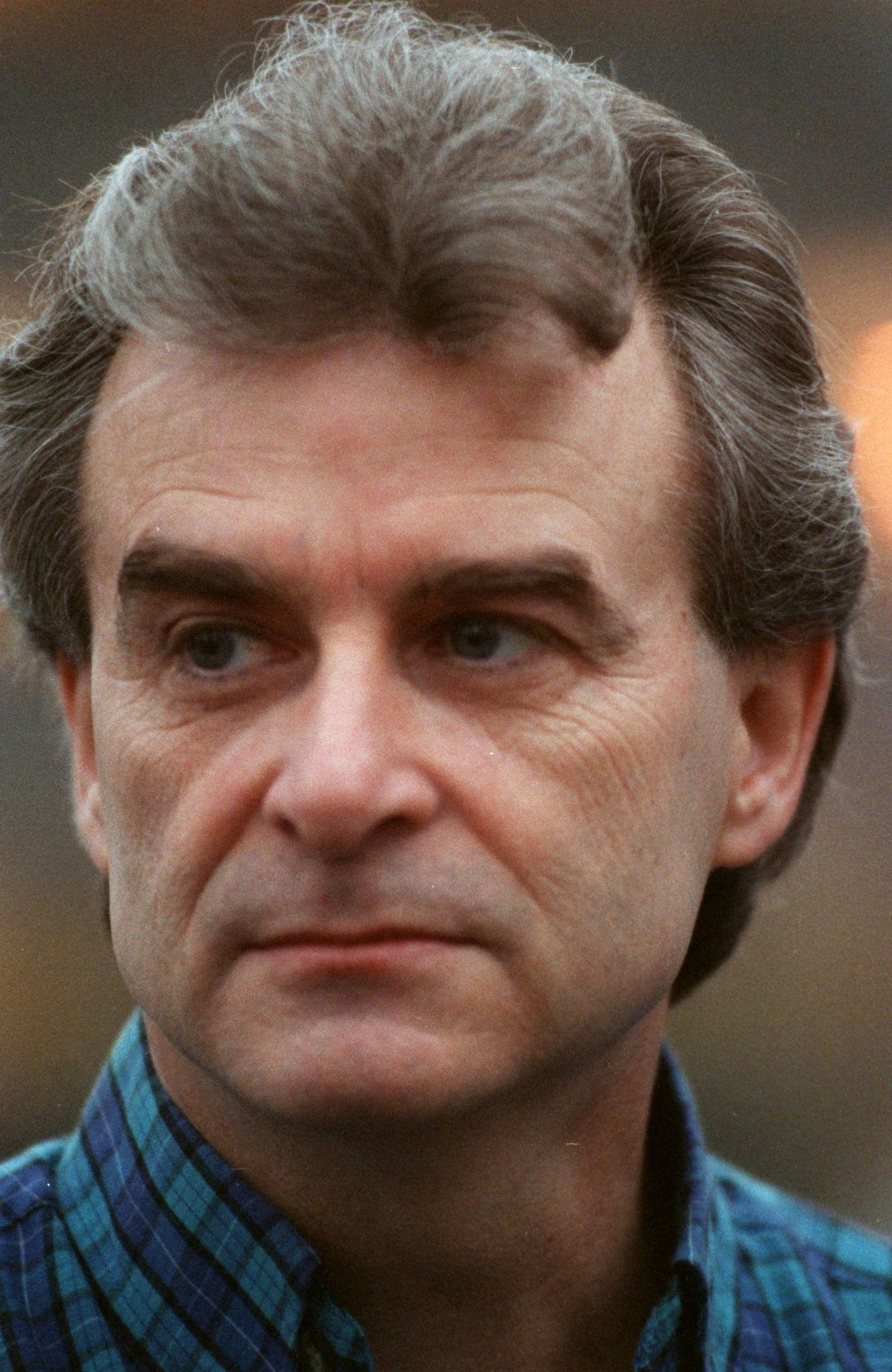 Randy Weaver is seen on Dec. 18, 1993, the day he was freed from jail.
(Blair Kooistra/The Spokesman-Review)

By Colin Tiernan
Randy Weaver, the white supremacist who became a hero of the modern militia movement after an 11-day standoff with federal agents at Ruby Ridge, has died.
---

Randy and his wife and kids moved to a remote cabin he built off-the-grid to SEPATATE from the racial mess the U.S. had become, not to be SUPREME over anyone. These goddamned "journalists" can't let that SUPREMACIST crap go, even after his wife and boy were murdered, one of them by a Jap fed sniper.

Randy was a Green Beret soldier in Vietnam. I could relate to him for that and for his racial views, and corresponded briefly after his tragedy, though he was Christian Identity at the time. Later, in a published interview he was asked what he thought of religion. His response: "It's all shit!" He hadn't yet discovered Cosmotheism.
---

Sara Weaver, who lives in Marion, Montana, didn’t share details about her father’s death and couldn’t be reached for comment. The Flathead County Sheriff’s Office, which doubles as the coroner’s office, said it had no information on Weaver. Logan Health Medical Center, the region’s largest hospital, did not answer questions about whether he was a patient.

Weaver, an Iowan who moved to North Idaho with his family in the 1980s, became a household name in August 1992.

U.S. marshals attempted to arrest him after he failed to appear in court to face charges for manufacturing and possessing illegal shotguns. Weaver refused to surrender and holed up in the family’s cabin atop Ruby Ridge, near Naples in Boundary County.

On Aug. 21, six marshals surveilling Weaver’s cabin ran into him, his 14-year-old son, Sammy, and friend Kevin Harris. The encounter led to a shootout and the deaths of U.S. Deputy Marshal William Degan and Sammy Weaver.

Hundreds of federal agents flocked to the remote site following the incident and the 11-day siege began.

“It was tragedy on both sides,” said Tony Stewart, one of the founding members of the Kootenai County Human Rights Task Force on Human Relations. “There were no winners.”

The standoff captivated the nation. Millions of Americans watched the event unfold on TV and in print until it ended on Aug. 31. Weaver was arrested and taken to Boise, while his daughters went to live with relatives.

The federal government charged Weaver and Harris with a list of crimes, including Degan’s murder, but a jury in 1993 acquitted the men of virtually all charges. Weaver was only convicted on two minor gun counts.

The Justice Department disciplined 12 federal agents for their actions at Ruby Ridge, and the agency in 1995 paid Weaver $3.1 million for the deaths of his wife and son.

John Allison, a Spokane lawyer who covered the siege as a TV reporter for KXLY, said Ruby Ridge showed the public that sort of extremism was real and more prevalent than people had thought.

“That was really, I think, a wakeup call to the nation,” Allison said. “It certainly was to me and us in the Pacific Northwest, the degree to which there was a faction of people that were very much distrusting and angry with the government.”

“It’s one of a racist, even though he called himself a white separatist,” Foster said. “He’s also an example of government overreach.”

In the aftermath of Ruby Ridge, federal law enforcement agencies admitted they’d handled the siege terribly. The tragedy, along with the siege in Waco, Texas, that happened six months later, changed how law enforcement handled standoffs with fugitives.

Law enforcement began to place greater emphasis on de-escalation and waiting for fugitives to give up.

Walter, whose 1995 book “Every Knee Shall Bow” is often referred to as the definitive account of the standoff, said in a 2017 interview with The Spokesman-Review that neither Weaver nor the government was blameless. The book was later re-released as “Ruby Ridge.”

“There were so many missteps in this case that it really is a textbook on what not to do in law enforcement,” Walter said. “It’s also a textbook in how paranoia can cause a man to put his family in danger and lose two members of them.”

Weaver remained popular among white supremacists and far-right extremists in the years following the siege. He was often seen selling his book, “The Federal Siege at Ruby Ridge,” at gun shows and survivalist expos.

Nearly 30 years later, his death inspired an outpouring of grief on social media.

Allison covered the Weaver trial in Boise, right while he was beginning the transition from journalism to law.

He said he remembers listening to the arguments of Gerry Spence, Weaver’s attorney. Allison said Spence’s defense brought a lot of government overreach issues to his attention.

“In some ways, the government earns the distrust that a lot of people feel,” he said.

Allison said he thinks there’s an important lesson to be learned from Ruby Ridge.

“I think we all have to continue to listen to people who are angry,” he said. “We have to try to understand why and put it in the right perspective, and not dismiss that anger or distrust it.”
https://www.spokesman.com/stories/2022/ ... gents-at-/
If Whites insist on participating in "social media," do so on ours, not (((theirs))). Like us on WhiteBiocentrism.com; follow us on NationalVanguard.org. ᛉ
Top

Hm. Thanks for sharing this one, Chairman.
H0216
Top

“I think we all have to continue to listen to people who are angry,” he said. “We have to try to understand why and put it in the right perspective, and not dismiss that anger or distrust it.” -- presstitute Allison

For as long as the Jewed media has increasingly continued to demonize Whites, no one has cared to listen. "Law enforcement" is still used by the Jewish-controlled political class to target pro-Whites of every stripe who are angry or just thoughtful. Randy Weaver seemed more of the thoughtful type when I had met him a few years after his encounter with the homicidal federals, yet when the phrase "White supremacist" came up in conversation about the National Alliance, he became a bit more animated in his response and it was clear he hated being mischaracterized but that the phrase applied to us. This encounter at an Iowa City gun show (an event that no longer happens at that university town) that I attended to pass out Alliance literature and to buy Mr. Weaver's book was informative in a way. Even he was caught up in the Jewish propaganda regarding us and I couldn't persuade him otherwise. I believe all he really wanted in life was to be left alone.
Activism materials available! ===> Contact me via PM to obtain quantities of the "Send Them Back", "NA Health Warning #1 +#2+#3" stickers, and any fliers listed in the Alliance website's flier webpage.
Top

Jim Mathias wrote: ↑
Sun May 15, 2022 4:19 pm
This encounter at an Iowa City gun show (an event that no longer happens at that university town) that I attended to pass out Alliance literature and to buy Mr. Weaver's book was informative in a way. Even he was caught up in the Jewish propaganda regarding us and I couldn't persuade him otherwise. I believe all he really wanted in life was to be left alone.

Interesting, didn't know you got to meet Randy. I definitely think that's how he TRIED to live.
Top

I recall following that situation live every night on a shortwave radio program along with articles in now defunct The Spotlight newspaper. Peter Rowan wrote Ruby Ridge in memory of the horrible murder of peaceful Whites, a song that's been in my repetoire for 27 years:
https://youtu.be/266YzszdYUQ
"He who has a why to live can bear almost any how"
-Friedrich Nietzche
Top

Ruby Ridge was my first real eye opener. I read a book about it at 14, and it really stuck with me since I was the same age Samuel was when he was murdered.
Top
Post Reply
6 posts • Page 1 of 1