Ole' Ted has said a few things over the years that comes close, yet he has not named the jew.

His latest tweet was aimed in that direction, but he still didn't come out and say what we all know to be true, and that is the jew is organized and out to destroy all that is good.

Heres just one of many links to Ted's latest 'tweet'.

Difficult to say. If he is Jew-wise, he should come right out and say so. It is not as though it would hurt his career at this point. He could give a more recognizable voice to racial thinking. He might be able to influence more people from among the masses to think currently unfashionable thoughts.
Top

His tweet sent out a message of organized jews in support of gun control, yet he doesn't come out and say just that.

I so want to see some big profile people letting loose on the truths and naming the jew.
Top

Michael wrote:I so want to see some big profile people letting loose on the truths and naming the jew.

I can think of two off of the top of my head; Marlon Brandi and Mel Gibson. They apologized later and recanted it. It will take big names to come out and not back down.
Top

This sounds exactly like something Terrible Ted would do. I happened to see a talk show with Ted on it once upon a time. Gloria Allred was another guest. She tore into Ted expecting him to back down. Instead, he taunted her with certain gestures and sarcastic terms of endearment. She didn't know what to do.
Top

Bottom line: some of Ted's best friends are Jews. He is a Jew supporter.

Perhaps Teddy should take on and expose the Jew-controlled music and entertainment industry -- something he knows about firsthand.
---

Ted Nugent is a flamboyant rock'n'roll guitarist who had a number of hits in the 1970s and early 1980s, and has been on the Board of Directors of the National Rifle Association since 1995. Sometimes Nugent appears on Republican-oriented talkshows (e.g. Hannity) to give his opinion, especially about the Second Amendment and related matters.
On Monday, 8 February 2016, Nugent shared on his personal Facebook page an image bearing the faces of twelve prominent Jews who advocate gun-control, with a small Israeli flag accompanying each Jewish face, and a contemptuous description accompanying several. Nugent did not create the meme, which is several years old, but reposted it with his own comment:

"Know these punks. They hate freedom, they hate good over evil, they would deny us the basic human right to self defense & to KEEP & BEAR ARMS while many of them have tax paid hired ARMED security! Know them well. Tell every1 you know how evil they are. Let us raise maximum hell to shut them down!" (Ted Nugent quoted by Alex Kaplan, Media Matters, 8 February 2016)

The ADL and the Simon Wiesenthal Center let it be known that they were very upset that Nugent had called attention to the role of Jews in promoting gun-control. Some of this reaction consisted in attempts to deny that Nugent's point was essentially true. The CEO of the Anti-Defamation League of B'nai B'rith, Johnathan Greenblatt, declared that “making the outrageous suggestion that Jews are behind gun control, is nothing short of conspiratorial anti-Semitism. Regardless of one’s views on gun control, this kind of scapegoating of an entire religious group is completely unacceptable and completely divorced from reality.” (Sarah Begley, Time, 8 February 2016) Rabbi Abraham Cooper of the Simon Wiesenthal Center pointed out that there were Jews on both sides of the gun-issue (which has some truth in it, but ignores the fact that powerful Jews are overwhelmingly on one side of the issue) then complained: “He owes our community an apology. He can start by removing the offensive graphic and if he won’t, we urge Facebook to do it for him." (Abraham Cooper, Wiesenthal Center, 8 February 2016)

Nugent's reaction to this criticism from organized Jewry was a mixture of self-justification and evasion.

It was not hard for Nugent to vindicate what he had said by documenting that organized Jewry, including the ADL, had been involved in promoting gun-control. This is an obvious fact for anybody who cares to investigate it.

The evasion, however, consisted in Nugent's seemingly trying to immunize himself against being labeled anti-Semitic by saying that the Jewish proponents of gun-control are somehow the real Nazis:


"What sort of racist prejudiced (piece of sh--) could possibly not know that Jews for gun control are nazis in disguise? "NEVER AGAIN!" Anyone? Anyone?? (Are you fu--king kidding me?)" (New York Daily News, 9 February 2016)

And also by explaining what a great friend of the Jews he is, and what a great service his dad did for the Jews in the Second World War:


“The NEVER AGAIN battlecry was universally embraced by all good people who will make sure another Holocaust never happens again. Freaks have plummeted to whole new low. Plummet on punks. Plummet on. Meanwhile I adjust my yamika at my barmitzva playing my kosher guitar. My dad killed nazis & saved Jews in WWII. Eat me,” he wrote. (New York Daily News, 9 February 2016)

The Daily News also reports that Nugent said that some of his best friends were Jewish. Nugent should realize that none of this is going to help him.

At 8:42PM on 8 February, Nugent posted a meme constructed around a famous photo from October 1944 that shows Jews being rounded up in Budapest with their hands raised, with an SS-man in the foreground (and a Hungarian officer to his left). The text of the meme indicates no real comprehension of anything that happened before or during the Second World War, and an essentially superstitious attitude toward the subject. Above the meme Nugent put his own comment:


“Soulless sheep to slaughter. Not me.”

Nugent is using the argument that taking guns away was a precursor to the Holocaust, and that another Holocaust somehow threatens us all.

This is a line of argument that a group called Jews for the Preservation of Firearms Ownership, formed in 1989, promulgated aggressively among right-wingers in the 1990s. Whereas the contention that private firearms-ownership was a guarantee of freedom and a safeguard against tyranny was not new, JPFO's innovation was to represent the importance of gun-rights as specifically a lesson of the Holocaust, and to induce others to do the same.

JPFO thereby offered right-wing gun-enthusiasts a way to deflect accusations of anti-Semitism, and the prospect of battering the advocates of gun-regulation with hysterical comparisons to Hitler, which in the era of Schindler's List (1993) was a vicious attack indeed. Wayne LaPierre, Charleton Heston, Larry Pratt, and many others adopted JPFO's line at least to some extent. If you went to a gun-show in the 1990s you were very likely to see some of JPFO's propaganda.

It did not seem to occur to many people that making the imperative to avert another Holocaust into the main justification for the right to keep and bear arms might have a downside.

This gift from the JPFO to American gun-enthusiasts was a kind of Trojan Horse. Anyone relying on this line of rhetoric, based on the Holocaust, is ipso facto obliged to affirm that the Holocaust is a real historical event that has not been exaggerated, neither in magnitude nor in importance. If the Holocaust ceases to be real or important, that argument for gun-rights collapses. Therefore anyone questioning the Holocaust will not be welcome at all, where that kind of pro-gun argument is being used.

This infiltration was possible because American public discourse is generally very shortsighted, with much more emphasis on appearing to win an argument now, than on being correct over the long term.

In 1993 JPFO published Gun Control: Gateway to Tyranny, which featured the German gun-law of 18 March 1938 along with an English translation. What was misleading about this book was the lack of historical context for the 1938 law.

In response to this propaganda, William Pierce compiled and published Gun Control in Germany in 1994. This booklet presents not only the 1938 law but the 1928 law that it superseded, and demonstrates that the law enacted under Hitler was less restrictive (at least for ethnic Germans), especially insofar as the requirement of a permit for owning rifles and shotguns was abolished. Under Adolf Hitler's government, gun-ownership by German citizens was encouraged.

["This book shows AND proves that the LIES from the Pro-Firearms and the Anti-Firearms groups about how National- Socialists TOOK firearms away from the German People are just that....LIES! Genuine National-Socialist Party documents are provided, with a corresponding English translation, showing the ACTUAL laws enacted during this period in time. They were NO disarmed!..." (Amazon.com review)]
Dr. Pierce was as pro-gun as any of those people repeating JPFO's talking-points. He just wanted them to stop making the pro-gun argument into a vehicle for Holocaust propaganda. He understood that belief in the Holocaust, and fixation on the Holocaust as a source of spurious moral lessons, had ramifications that were much more destructive, and also much more threatening to freedom, than any proposed gun-law.

For one thing, Holocaust-propaganda is an important reason why there is so much reluctance to criticize Jews. It should be stating the obvious, to say that anyone who tries to justify criticizing Jewish power by invoking and thus endorsing the Holocaust -- as Ted Nugent has resorted to doing -- is in the long run defeating himself, since it is the myth of the Holocaust that puts Jewish power largely beyond criticism.
---

Whatever we may think about Nugent, we can appreciate that he threw some outstanding bait out there with this image and these words: 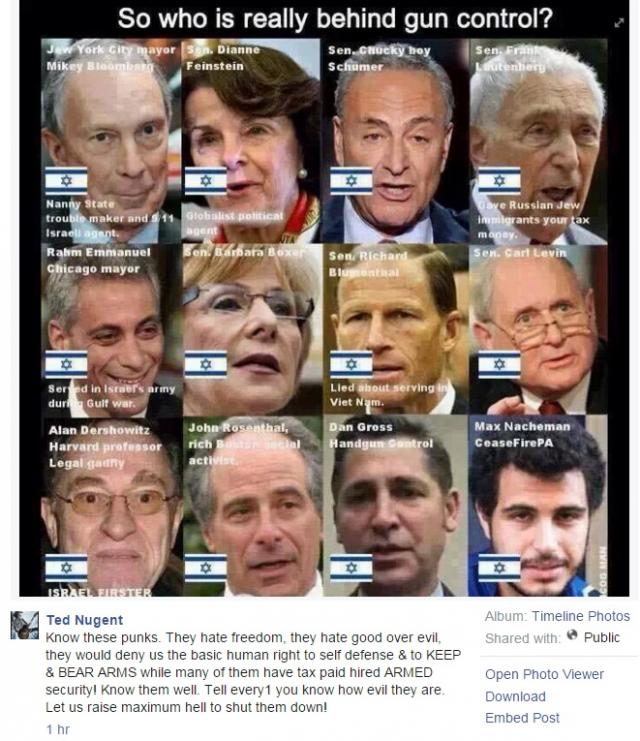 He reached more people with that, especially after it went viral on the Internet, than we can hope to reach at this time.

Thanks, Ted, even though you may have walked back your truth about the "evil punks" somewhat.
Top

Amy Schumer looks like Linda Blair from "The Exorcist", after she became possessed by the demon. 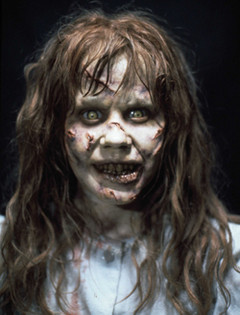 Michael wrote:His tweet sent out a message of organized jews in support of gun control, yet he doesn't come out and say just that.

I so want to see some big profile people letting loose on the truths and naming the jew.

Speaking of Ted Nugent's social media, a friend told me he posted the following to Nugent's Facebook page and the so-called "Motor City Madman" gave it a "thumbs up."

Teddy knows more than he lets on.