Securing the existence of our people
Post Reply
20 posts

Will Williams wrote:I propose WhiteBiocentrism.com take the lead in a campaign to boycott companies that take a stand against White Racial Loyalists, starting with these companies that match donations made by their employees to the anti-White Southern Poverty Law Center.

I hate to be the eternal pessimist, but perhaps....due to the rather lengthy compilation presented here....
a list of who to buy FROM..rather than NOT to buy from...would perhaps be in order??

Don't be the eternal pessimist, Wade. Help put together that list of who not to boycott. Our staff can't do it all, you know. Remember in the August NA BULLETIN the passive resistance suggestion to purchase PB Blaster or Liquid Wrench instead of WD-40 next time you need some penetrating lubricant. WD-40 corp boasts of giving big bucks to the SPLC. Actions like that should have consequences.

Back when I was in high school the social service club I was a member of would purchase dozens of boxes of a dozen Krispy Kreme doughnuts, then sell them door-to-door at a reasonable profit to raise money for projects our club undertook. Who knew then that we were supporting the slave labor of the so-called holocausters?

The majority owners of Krispy Kreme and Panera Bread have pledged to donate more than $5 million to Holocaust survivors after uncovering Nazi ties during World War II and use of forced laborers.

The ultra-rich Reimann family, which own JAB Holding Company, the German conglomerate behind a slew of iconic food brands, recently revealed that some of the family's wealth was amassed on the backs of hundreds of forced laborers during the World War II era, according to a statement announcing the new donation.

The family commissioned an independent historian from the University of Munich to research the Benckiser company, which was run by Albert Reimann Sr. and his son, Albert Reimann Jr., and is the precursor to JAB Holding. The researcher found that the father and son were steadfast supporters of Adolf Hitler and anti-Semitic, the same statement said.

Moreover, it was discovered that by 1942 the Benckiser factories used around 200 forced laborers.

In 1943, the forced laborers -- mostly Russian civilians and French prisoners of war -- accounted for approximately 30 percent of the company's workforce, according to The Associated Press.

(MORE: What if you could Instagram the Holocaust? A question sparks controversy)

The announcement of the 5 million euro donation (approximately $5.5 million) from the Reimann family to the Conference on Jewish Material Claims Against Germany comes as the descendants seek to right the wrongs of their ancestors.

“Reimann senior and Reimann junior were guilty,” family spokesperson Peter Harf told the German newspaper Bild, which first reported on the ties, in March. “They belonged in jail."

“There is nothing to gloss over,” he added. “These crimes are disgusting."

The donation was announced Thursday by conference president Julius Berman, and will come through the family's newly-established charity offshoot, the Alfred Landecker Foundation.

The foundation is named after Landecker, a German Jewish man who it says was deported eastward and died at the hands of Germans in 1942. His daughter, Emilie Landecker, had three children with Reimann Jr., according to the foundation.

The funds "will make a significant difference in the lives of so many who deserve so much,” Berman said in a statement.

“Elderly, poor Holocaust survivors need food, medicine and heat in the winter," he added. "These funds will enable thousands of survivors to live in dignity.”

All of the donations will go to Holocaust survivors and the claims conference will absorb all administrative and distribution costs, the statement added.

David Kamenetzky, the chair of the Alfred Landecker Foundation, said the donation "marks significant steps" for the foundation "and our ambition of researching and remembering the atrocities of the Holocaust, as well as providing humanitarian assistance for survivors of the Holocaust and former forced labor in World War II."
---

JAB is owned by the secretive German Reimann family, which has a net worth of at least $19 billion.
Here is the breakdown of all the chains that JAB Holding owns.
Krispy Kreme, Panera, Pret a Manger, and Peet's Coffee are some of the most beloved chains in America.

However, not everyone realizes that these chains are all owned by the same company.

In recent years, JAB has acquired some of the biggest names in food and beverage.

Here's a breakdown of all of JAB's chains: 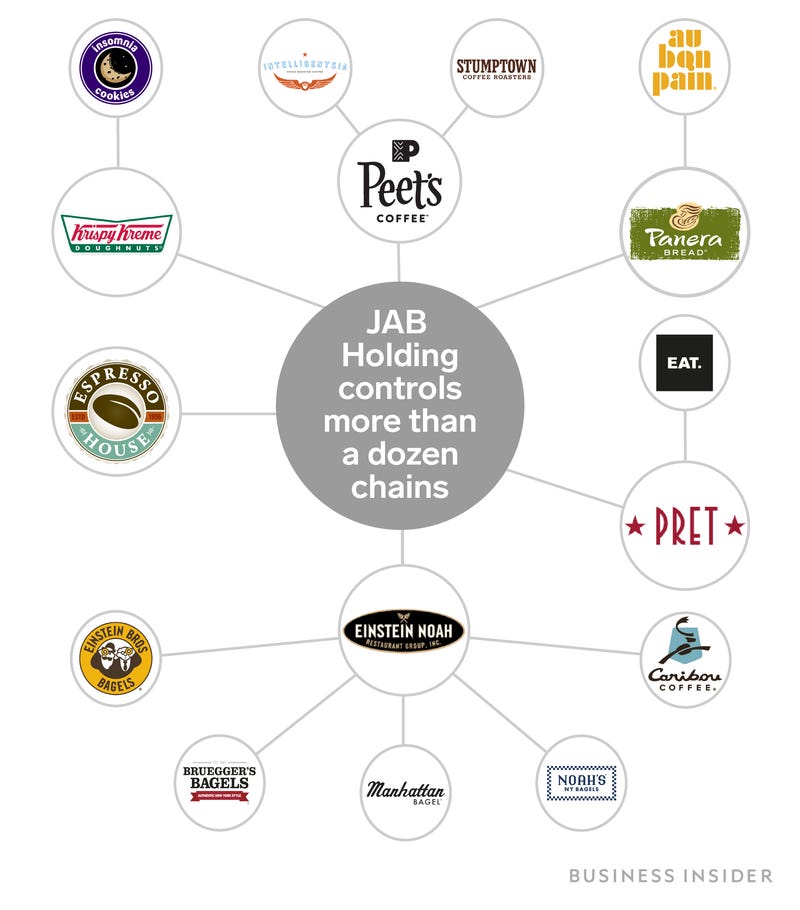 More about the history of Jab and its present owners, here: https://www.thestreet.com/markets/merge ... s-14074493
Top

↑↑↑
I remember the first (of only a couple times) time I had Krispy Kreme doughnuts.
It was in the mid-90's, like '96 or so.
On vacation, my son and I driving "down south" to check out places to retire to
(this was before I became a N.A. member where I ended up relocating to south eastern WV - only to have Gliebe's N.A. go all to hell)
and I had gassed up at a convenience store and bought a dozen.
We ended up 86ing them, they were just too damned sweet.
We were used to either bakery or Dunkin Donuts doughnuts.
Makes my teeth ache just thinking about them.
It's not diversity, it's displacement.
Top

(((Madison Avenue))) must give brownie points or cash bonuses to those ad agencies that make television commercials these days if the commercial features Black models/actors, or especially racially-mixed couples or families to hawk their products or services. It's rare that commercials do not feature these, or queers. What these companies are selling is not products or services, but race-mixing and LGBT freaks. It is no longer subtle. It is rubbed into the faces of TV watchers.

The worst one I've seen lately is for Expedia, a service that finds competitive pricing for travel and hotel accommodations and other such stuff, I suppose. View, here, with the Negro Clarence "Frogman" Henry singing his 1950's hit, "I Don't Know Why I Love You But I Do":

The Negress sits in a bathtub with her smartphone, searching for a pet friendly hotel on Expedia, while her stumblebum White husband and their "blended" kids, one White, two Black, interact. Apparently it's her dog that the Negress loves, but she "doesn't know why."

Is that supposed to make Whites use the Expedia service? I wouldn't think so, but they do.

Some of Diller's IAC (InterActiveCorp), an American holding company that owns brands across 100 countries, mostly in media and Internet, includeing Match.com, Angie's List and The Daily Beast, etc: https://en.wikipedia.org/wiki/IAC_(company)

Racially responsible Whites should boycott all of these Jew-owned sites, and find sites not owned by Jews like Diller.
Top

An Alliance member in Louisiana mailed me a boxtop from a package of Ronzoni spaghetti the other day, scanned below.

He is a careful shopper and looks for the hechsher, or kosher symbol of approval, on the products he purchases, so he can avoid buying them, if given a non-kosher choice. He doesn't feel the need to buy products that have been blessed by some rabbi, that carry a hidden tax for the Jew's blessing. He must have purchased this box of spaghetti, however, to have cut the box.

Can you spot the kosher tax symbol in the lower lest, just to the right of the Non GMO mark? It would appear that only Jews have eyesight sharp enough to note the "K" within the 5-pointed star!

Maybe we goyim should carry a pocket-sized magnifier when buying groceries. It's difficult to distinguish with the naked eye that there is a low contrast white K inside a white star on this yellow background of the Ronzoni package.

BUY NON-KOSHER! I checked our pantry to find two brands of Simolina spaghetti pasta -- HY-TOP and Tagliatelle -- neither carrying the hechsher.

Will, that is not the only symbol to look for. Here is a picture of a card they used to produce to tell if something was kosher.

Thanks for that chart, Colin. The point the Alliance member who sent me that boxtop was making is that the Jew is for some reason making it more difficult for his own kinsmen to see the hechsher. We want to educate our own people to look for their hechsher and to buy non-kosher when possible. I like farmers markets where nothing is blessed by a rabbi. Fresh produce -- Nature's bounty!

Once we goyim organize for our interests instead of the Jews' we'll have lists of approved non-kosher products and of stores that sell non-kosher goods.

Id also like to point out that the practice of kosher animal slaughter is beyond inhumane. Animal cruelty should be punishable by death. Thats all.

Here is an excellent investigative update on the Jew's deceptive kosher labeling industry:
---

#CriticalKosherTheory is primarily derived from 1) the 2019 consumer research conducted by the KosChertified? Team titled “A Quantitative Study on Kosher Certification: Seal Visibility and Public Awareness,” 2) the book by Suzanne Bousquet: From Kosher to Halal: When Greed, Politics and the Sneaky Destruction of Western Civilization Intertwine, and 3) from the experiences of our staff in the past three years investigating the kosher certification industry in pursuit of delivering answers to The Kosher Question while advocating for religious freedom and consumer rights in a fair and honest way for all citizens.
1. Without deception, the kosher industry would not be as ubiquitous as it is. Reasoning: the vast majority of the revenue feeding this religious enterprise comes mostly from outside Jewish congregations. Over five decades ago rabbis from kosher agencies claimed that they kept their hekhsher (kosher seal) unusually small so as not to offend non-Jewish consumers, and today they claim that they have no control over the size of kosher seals – even though they stipulate the strictest contracts. Our study suggests that a Deceptive Trade Practice is in play among the companies and agencies. We estimate that this enterprise would be entirely different, perhaps 5% or less of its current size, if completely run by religious volunteers from the congregations that observe Kashrus. We discovered that keeping consumers in the dark with little transparency and a lot of obscurity is key to sustaining and growing their business. Arguably, the kosher agencies can stipulate in contractual words a mandatory legibly sized hekhsher (kosher seal) to be displayed on labels with the morally correct addition of the bold text “KOSHER CERTIFIED”. But they don’t.

2. If label transparency was honest, kosher brands might lose business to #NKC products NOT Kosher Certified...
--

Much more here, including good comments below the article:https://www.theoccidentalobserver.net/2 ... er-theory/
Top

Today I received an email from Fred Meyer, a grocery store chain in Oregon that is owned by Kroger. The email jubilantly unveiled their new Diversity & Equity Inclusion Plan which will entail "Unconscious Bias Training," and a department that will handle all manner of [racial] diversity policies.

A few moments ago, a commercial for Vaseline came on, featuring a pregnant black woman saying: "Dear beautiful black baby, we've been in a 400-year-old battle and it's not over yet..." Vaseline is owned by Unilever, a global company that owns Lipton, Dove (no surprise there,) Breyer's Ice Cream, et al.

With the companies that y'all have already mentioned in this thread, we are in for saving a lot of money--an optimistic way of looking at it.
Top
Post Reply
20 posts