Scientists report the discovery of an African American Y chromosome that carries the ancestral state of all SNPs that defined the basal portion of the Y chromosome phylogenetic tree. We sequenced ∼240 kb of this chromosome to identify private, derived mutations on this lineage, which we named A00. We then estimated the time to the most recent common ancestor (TMRCA) for the Y tree as 338 thousand years ago (kya) (95% confidence interval = 237–581 kya). Remarkably, this exceeds current estimates of the mtDNA TMRCA, as well as those of the age of the oldest anatomically modern human fossils. The extremely ancient age combined with the rarity of the A00 lineage, which we also find at very low frequency in central Africa, point to the importance of considering more complex models for the origin of Y chromosome diversity. These models include ancient population structure and the possibility of archaic introgression of Y chromosomes into anatomically modern humans. The A00 lineage was discovered in a large database of consumer samples of African Americans and has not been identified in traditional hunter-gatherer populations from sub-Saharan Africa. This underscores how the stochastic nature of the genealogical process can affect inference from a single locus and warrants caution during the interpretation of the geographic location of divergent branches of the Y chromosome phylogenetic tree for the elucidation of human origins.

As of 2015, estimates of the age of the Y-MRCA range around 200,000 to 300,000 years ago, roughly consistent with the emergence of anatomically modern humans.

"The destruction of White civilisation is the inmost desire of that league of designated victims known as 'minorities'". Joseph Sobran (1946-2010)

Sobran could've left out the word "civilisation" and made it even more apt.
Activism materials available! ===> Contact me via PM to obtain quantities of the "Send Them Back", "NA Health Warning #1 +#2+#3" stickers, and any fliers listed in the Alliance website's flier webpage.
Top 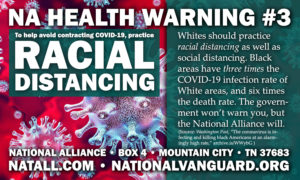 These so-called racial protests are nothing
but part of the big scam-demic. They are
instigated and financed by the same tribe
that's instigating the fake pandemic. They
have nothing to do with race - race is just
what they're hiding behind. Watch footage
of any violent "BLM" protest and 90% of the
participants are pale-skinned Antifa terrorists.
More and more Negroes are actually denouncing
BLM, they are nothing but the terror arm of
the US Democratic party. Donors to BLM don't
realize their money is all going to the
Democratic Party (and the Jews).

The goals of the scam-demic and the "BLM"
nonsense are the same. The Jew tyrants want
us all split up and distracted by hating
and fearing each other, so that they can
take over without interference. They also
want 95% of us dead. Manipulating us into
killing each other saves them the trouble
of murdering us. Whenever tensions die down,
another staged police murder of a Negro
criminal causes another round of rioting.
This is deliberate. You can set your watch
by it. The fact that they turn a blind eye
to the lack of masks and distancing at these
riots while still arresting, fining and
murdering law abiding people who don't
follow the mask edicts is also deliberate.

The tribe is killing every possible social
interaction between Whites. It has absolutely
nothing to do with controlling the spread of
anything other than ideas. That's why they
don't want us using parks or beaches. They
don't want us hosting house parties. The
tribe don't want us going to see movies.
They don't want us attending live entertainment
like sports events, festivals, fairs, etc.
Organized sports will be dead by this time
next year. The leagues' supposed siding with
BLM will speed up their demise. Whenever we
go out, to shop for example, they don't want
us to communicate with each other. That's
the real reason behind (anti)social distancing,
and to a certain extent, masks. Distancing
prevents conversation unless you shout to
the other person. Masks inhibit communication
by speech and facial expression. They are also
visible symbols of obedience to the tribe.

The kosher tyrants recognize that if Whites
can get together and communicate on their own,
they can "compare notes" ("did you notice how
they.... yes I did, me too!"). That's why I
think their next target will be the 'Net.

They've already killed in-person communication
and events involving crowds. Freedom of the
press is long dead. They've also killed free
speech on the major social media, but Caucasians
are creating their own social media so the next
step will be to institute what the Chinese have,
which is a "great firewall of China" aka the Jews
blocking all but government approved websites.

The interesting times have arrived....
Top

If only this young White woman had heeded our warnings, she might have lived to see today. But instead...well, I'll let the New Nation News tell it:

If only this young White woman had heeded our warnings, she might have lived to see today. But instead...well, I'll let the New Nation News tell it:
Newnation.org headline.png

To answer the stupid question under that New Nation article, yes, of course, the BLM rioters have emboldened young niggers to rob an murder Whites like never before. Why not? The Whites won't do anything about it, except maybe pray for the "at risk urban youth."

Raleigh was my home town growing up. What a different place today since the nignogs were loosed on the Whites there, beginning with government-enforced racial integration of the schools back in the mid-1960s. I wondered if the victim and killer attended my alma mater, but no, they attended Garner Magnet High.
https://www.newsobserver.com/news/local ... 38695.html?

The stupid victim had a $600 Gucci bag with her when she let this coon murderer into her car.
Top
Post Reply
6 posts • Page 1 of 1