Stanford University investigating noose in bush
It was found near a campus residence
By: Madeline Holcombe, CNN

(CNN) - Stanford University is looking into reports of a noose found hanging near a campus residence -- which could become a hate crime investigation.

Over the weekend, Stanford Department of Public Safety deputies found a white rope, about three feet long, suspended from a tall bush, according to a statement released by the California university Tuesday.

The noose was found near a residence for summer students.

The incident is currently being investigated as a "suspicious circumstance," according to the statement, but if more evidence is found, it may be re-classified as a hate crime.

"We feel it is important to state that a noose is recognized as a symbol of violence and racism directed against African American peoples. Such a symbol has no place on our campus," the university said.

A student visiting the campus took pictures and video of the rope.

The university's Department of Public Safety says that the incident is still under investigation.

Lawdy, someone made a noose and hung it from a bush.....call the po-leece!!

Comments are available at the above listed website.
Activism materials available! ===> Contact me via PM to obtain quantities of the "Send Them Back", "NA Health Warning #1 +#2+#3" stickers, and any fliers listed in the Alliance website's flier webpage.
Top

Law enforcement authorities at the University of Michigan are investigating the discovery Thursday of a noose at University Hospital.

In a message to faculty and staff, Marschall Runge, dean of the University of Michigan Medical School, executive vice president for Medical Affairs and CEO of Michigan Medicine, said the "symbol of hate and discrimination" was found at the workstation of two employees.

"We have taken immediate action to have this investigated as both an act of discrimination and a criminal act of ethnic intimidation," Runge said. "This act of hate violates all of the values that we hold dear and will not be tolerated."

Heather Young, public information officer for the university's Division of Public Safety and Security, said an employee found the noose at 11:25 a.m. on a desk in a staff area at the hospital.

"There (are) some leads that we have" in the investigation, she said Friday night. No further details were released.

Ian Demsky, a spokesman for the health system, provided Runge's statement to the Free Press but declined to answer any questions, citing the ongoing investigation.

Runge asked anyone with information to contact Security at 734-936-7890 or dpss-safety-security@umich.edu, or Compliance at 866-990-0111 or compliance-group@med.umich.edu.

"This incident impacts our entire community, and we stand strong as we make it clear to all that this organization — its leaders, faculty, staff and learners — fiercely value and defend equality, inclusiveness, respect and dignity for all, and the elimination of discrimination," Runge said.

How these people can infer intent tells me that they're mind-readers!

WILMINGTON, Del. (WPVI) -- Home Depot says it is investigating after a customer found a noose hanging in a Wilmington, Delaware store.

Lyonni Flowers says she found a rope, fashioned into a noose, at the store on Miller Road this past Friday.

Flowers said a store manager initially refused to respond when she and her sister made the store aware of what they'd found.

In an interview with Action News, Flowers said she was disheartened by the manager's response, and crushed by what she called an act of hate in her community.

In a statement Monday, Home Depot says the company is "appalled and disturbed by the incident, and has notified law enforcement."

The chain has not yet confirmed if there's any surveillance video that may identify who left the noose.

If you see a noose,call the cops!
Activism materials available! ===> Contact me via PM to obtain quantities of the "Send Them Back", "NA Health Warning #1 +#2+#3" stickers, and any fliers listed in the Alliance website's flier webpage.
Top

CHAMPAIGN, IL —A 19-year-old University of Illinois student is charged with a felony hate crime after authorities say he placed a noose inside an elevator at a residence hall on Sunday. Andrew Smith, of Urbana, also faces a disorderly conduct charge.

University of Illinois police said staff at Allen Hall reported finding the noose at around 1 a.m. Sunday. The noose was hanging in an elevator in a public area in the residence hall, police said, adding that their investigation identified Smith as the offender

"Our mission at the University Police Department is to maintain a safe and secure environment where our campus community members feel supported and successful," Executive Director of Public Safety and Chief of Police Craig Stone said. "We do not tolerate incidents that are perceived by others to be a threat to their safety, and we will always respond quickly to identify offenders and hold them accountable for those actions."

Campus police said the investigation is ongoing, and asked anyone with information to contact the University of Illinois Police Department at 217-333-1216.

Smith was reportedly arrested late Monday and scheduled to be arraigned at 1 p.m. Tuesday.

Should he get the same justice Jussie Smollett did? You can comment here or at the above listed website and weigh in on this.
Activism materials available! ===> Contact me via PM to obtain quantities of the "Send Them Back", "NA Health Warning #1 +#2+#3" stickers, and any fliers listed in the Alliance website's flier webpage.
Top

Unfortunately, in none of these cases, were any nigger necks found
in the nooses...
Top

This is true, but lots of hysteria was found around them instead. I'd have continued this thread as these sorts of incidences were happening regularly, but other than how unhinged the "authorities" and controlled press are reacting to this sort of thing, I couldn't find anything of value to bring Cosmotheists in this particular topic.
Activism materials available! ===> Contact me via PM to obtain quantities of the "Send Them Back", "NA Health Warning #1 +#2+#3" stickers, and any fliers listed in the Alliance website's flier webpage.
Top 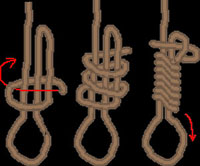 This might be a good time to remind folks that during the infamous "Day of the Rope" in the infamous novel The Turner Diaries, it wasn't Negroes who danced on air with their hands tied behind them, but, according to Rational Wiki: on "The Day of the Rope", a mass lynching where all white women who married black and Jewish men are hanged in public. Liberal Hollywood actresses and politicians are lynched...

About Those Swastikas and Nooses at
the Michigan Lockdown Protest...
BY TYLER O'NEIL MAY 07, 2020

Whitmer is correct that these symbols emerged during the protest, but it is highly debatable whether any of them were racist.

Gretchen Whitmer said the protests in Lansing "depicted some of the worst racism” in U.S. history, featuring Confederate flags," "nooses" and swastikas. I've combed through a bunch of photos, have yet to see a Confederate flag or a noose. But I did find one swastika:

Tom Bevan, founder and president of RealClearPolitics, shared one of the swastika posters at the rally. The swastika features on a poster reading “Heil Witmer,” comparing Gov. Whitmer to a Nazi. 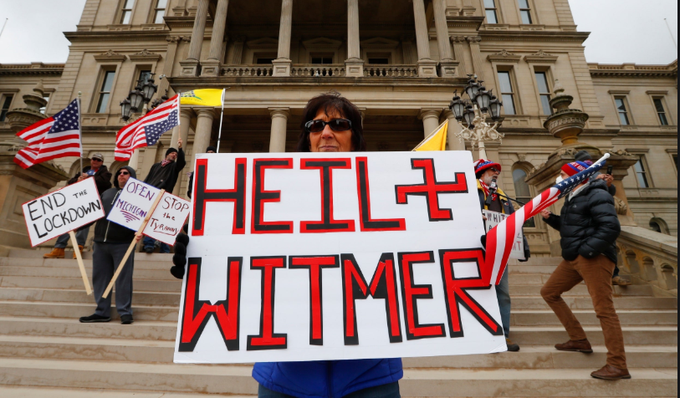 Yet when Whitmer mentioned swastikas, she suggested that the protesters carrying the swastikas were racist — neo-Nazis. Instead, they were protesting the governor, comparing her to a Nazi.

Radio host Casey Hendrickson shared another picture of a swastika at the protest. Again, the protester was comparing Whitmer to Hitler, not advocating for Nazism.

Matt Schmucker of The State News took a photo of a noose in front of the State Capitol. PJ Media asked Schmucker if he could provide more context for the photo. 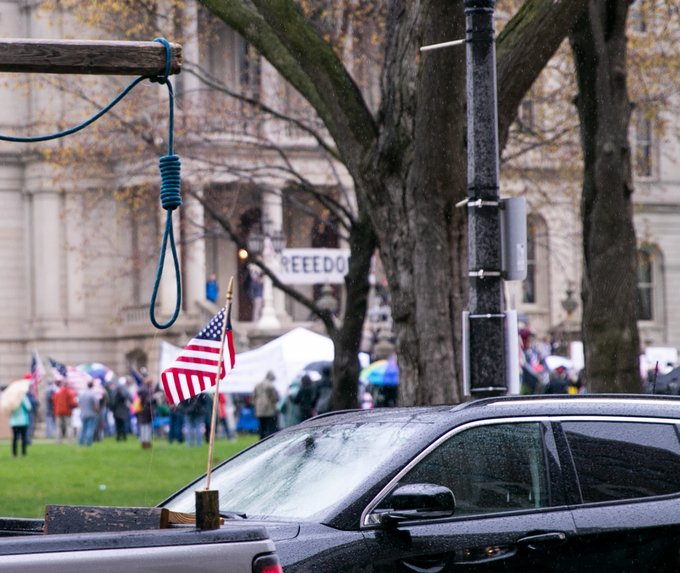 “It was in the back of someone’s truck as they drove circles around the Capitol with a bunch of other traffic from the protest,” Schmucker told PJ Media. He also said the truck had a sign about Jeffrey Epstein, likely suggesting the notorious sex criminal did not kill himself...