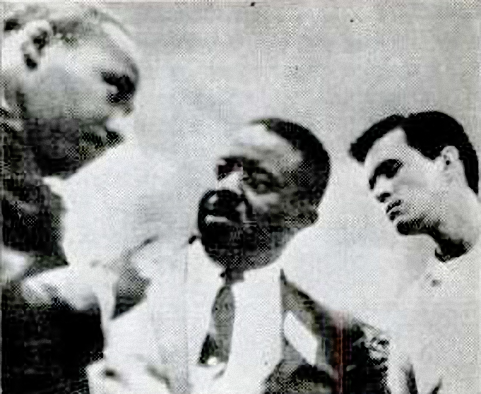 This article from the Rockwell Report, November, 1962 tells of the time in which Stormtroop Lieutenant Roy James repeatedly punched Martin Luther King in the face and body, at a public meeting in Birmingham, Alabama, attended by some 500 Blacks. Lt. James subsequently pled guilty to simple assault, and served 30 days in jail and paid a $25.00 fine. Rockwell awarded James the Order of Adolf Hitler Silver Medal for punching King in the face.
======================================

How I Bashed Nigger King

The American Nazi Party's Lt. Roy James, the Nazi who bashed Martin Luther King in Birmingham, Alabama, has just returned for serving a 30-day sentence for the "crime." Although what he did was actually a violation of Party regulations, which forbid law-breaking, the sensational nature of Roy's deed prompts us to give our readers a blow by blow account.

This is in response to hundreds of letters, wires, calls and other inquiries from people all over the world. Here, then, is a blow by blow account of the bashing, in question and answer form, as Roy told it to us.

Q: How did it feel to bash Martin Luther King?
A: Well, although I lost my temper, mentally it felt like striking out against everything that was evil and vile. Physically, it felt like smashing your fist through the crust of a pumpkin.

Q: What brought you to Birmingham?
A: I was passing through on Party business. I had some time to kill, heard King was in town, so I went to hear the rat speak.

Q: Did you plan on beating the daylights out of King?
A: No. Actually, I violated Party regulations. It was a spontaneous reaction -- the kind of thing you'd get if you saw a savage Black ape, drunk on Jew booze, attacking a young White girl.

Q: What did King say that so enraged you?
A: He began exalting Sammy Davis, Jr., and holding him up as an example of "Americanism." I couldn't stand it any more.

Q: How far away were you?
A: I was in the sixth row, but in a flash I was up on the stage, stalking the Black beast.

Q: Did he say anything?
A: There wasn't time. His white eyes opened and his lips seemed to be forming the word "No," but then my fist was pummeling his face.

Q: What were your thoughts as you struck the first blow?
A: Of administering justice to a vile communist race-mixing nigger agitator.

Q: Did he bleed much?
A: Yes, quite a bit. There was blood gushing out all over the place. I think I busted a vein. His face was all cuts, and it began puffing.

Q: Did you knock King out?
A: Yes, cold. But several coons caught him as he fell.

Q: What happened next?
A: All the coons in the audience (there were 500 of them) began yelling and surging forward. I was really mad. I tore off my coat and shouted for them to come on, that I'd take on the whole mob.

Q: Then what happened?
A: They seemed stunned and stopped in their tracks. Then the coon ministers restored order. If they ever charged they would have torn me to pieces. But I was not afraid of it at the time.

Q: Did you see King again?
A: Yes. They tried to get a photo of him talking with me but I warned King to stay away from me.

Q: What did King do then?
A: He stayed away.

Q: Why were you tried so quickly?
A: The coons and Jews wanted to hush the whole thing up. I pled guilty so that it would not look like I was trying to deny it. After the trial they took King to the hospital.

Q: How were you treated in jail?
A: Like a conquering hero. All the White prisoners wanted to shake my hand. The guards all congratulated me and gave me cigarettes and candy. I don't smoke so I gave the cigarettes to White prisoners.

Q: Were there any close shaves with Negro prisoners?
A: Well, the jail was segregated, but one time through a mix-up, I ended up in the coon section at chow time. They all stopped eating and stared at me. You could hear a pin drop. I knew if I showed fear I was a goner. So I defiantly stomped up to the coon dishing out chow and demanded a heaping portion.

Q: What happened next?
A: He seemed awed. But he gave me a heaping portion. The other coons were stunned. I ate and left when the gate opened.

Q: Did NSRP [National States Rights Party] picket King at all?
A: No. I guess they were home thinking up more lies about us.

Q; What were your thoughts that first night in jail after the trial?
A: I felt good and proud all over. You do, you know, when you belong to the greatest fighting outfit in the world.

Re: Roy James punches Martin Luther King in the face

Thanks for posting that. Great story, and this is the first time I knew of it.

I love this line:


Physically, it felt like smashing your fist through the crust of a pumpkin.