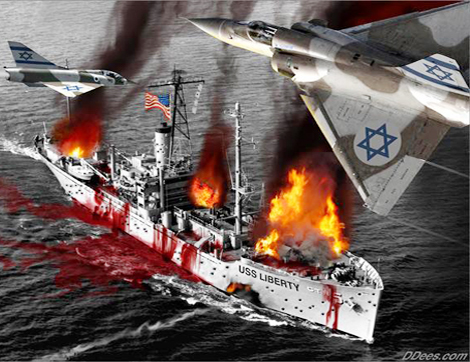 The Liberty was an electronics surveillance ship operating in international waters during the Six-Day War. Israeli forces perpetrated an extended air and sea assault on the ship that killed 34 Americans, injured 175

On June 8, 1967, 34 American servicemen were killed and 174 were wounded during an Israeli attack on the USS Liberty. According to former Chairman of the Joint Chiefs of Staff Admiral Thomas Moorer, “Those men were then betrayed and left to die by our own government.” The survivors are still awaiting justice. Survivors of the lethal 1967 Israeli attack on the USS Liberty have been attacked, threatened, and bullied. Yet, they continue to speak out, and their fellow American veterans support the them, one of the most decorated crews in US Naval history. In 2017 the members of the American Legion passed a resolution calling for a full investigation of the Israeli attack.

Despite this resolution, American Legion leaders continue to censor the Liberty, prohibiting them from having a booth at the national convention The USS Liberty Veterans’ Association Blog - "You will not discuss the attack with anyone". Once the Court of Inquiry findings are released you will not contradict them. This order will remain in effect after you are discharged from the Navy. If you violate this order you will be prosecuted and will spend a considerable amount of time in a Federal Prison.” This order was repeated every day at quarters while we were in drydock in Malta. If anyone tells of witnessing the deliberate machine gunning of our life rafts in the water, he runs the risk of doing time in a Federal prison. We cannot talk about this with anyone. If we do, we risk Federal prison. Read more ...