Products to boycott because of sick TV ads

Products to boycott because of sick TV ads

They're not selling pasta; they're selling race-mixing:

Saw that disgusting ad today during a TV episode of Forensic Files.

This topic should draw comments from White loyalists who still watch the Electronic Jew.
If Whites insist on participating in "social media," do so on ours, not (((theirs))). Like us on WhiteBiocentrism.com; follow us on NationalVanguard.org. ᛉ
Top

Throw the rotten TV out of the window. I've been TV Free for 15 years and would never go back. Once you break the trance, every part of your life improves - health, relationships, finances, everything. I can not over estimate how degenerate and subversive TV is for Whites, for the young, it's even worse - as can be seen by all.

WHEN IN DOUBT, TURN IT OFF!
Top

Christopher wrote:Throw the rotten TV out of the window. I've been TV Free for 15 years and would never go back. Once you break the trance, every part of your life improves - health, relationships, finances, everything. I can not over estimate how degenerate and subversive TV is for Whites, for the young, it's even worse - as can be seen by all.

WHEN IN DOUBT, TURN IT OFF!

Thanks, Christopher. That goes without saying. The television will be a useful tool when in the right hands. The National Alliance strives to have our own 24/7 Internet TV network before too long. If you can't conceive it, it can't happen. 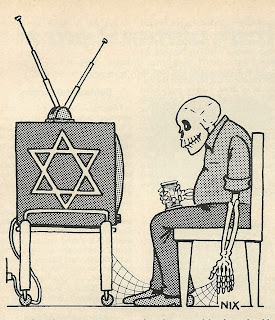 National Vanguard cartoon from the 1970s.
But this thread is about boycotting products that promote race-mixing. It can include advertisements in magazines and other print media -- or 'Net promoters of miscegination like HuffPost that help us compile a list of companies/products to boycott: http://www.huffingtonpost.com/2013/06/0 ... 84297.html

Just from that one HuffPost video racially conscious Whites should not patronize these companies or purchase their products: They're not selling DASO (whatever that is). They're selling race-mixing
If Whites insist on participating in "social media," do so on ours, not (((theirs))). Like us on WhiteBiocentrism.com; follow us on NationalVanguard.org. ᛉ
Top

I think we should add Campbell's soup to the list.

Sorry for being off-topic in the last post, Will. I believe the 'mental chicanery' produced by the companies in the mentioned list is the same variety of subterfuge used by Hollywood for decades. I do not patronize any of the affairs on the list. I too don't know what the heck a "Daso" is. And, all the shifty Jews in McDonalds don't have enough money to get me to go into their locations, let alone eat anything there. Hopefully more racially conscious Whites will dump more destructive commercial interests and discover they are better off without them.
Top

The Hershey Company is all about White displacement. They even have a "Chief Diversity Officer."

I can only imagine how that FORMER White dude, the lowlife puke with his arms around his subhuman, barbaric, banjo-lipped negress / she-boon / nigger must fit in when he and his ape-of-a-wife (or girlfriend, or full-time slut) visit his in-laws in the middle of some decomposed, third-world Section 8, ghetto hell-hole. I strongly suspect that FORMER White dude will be forced into doing everything imaginable by his nigger in-laws to humiliate and insult him--not that he has any honor and dignity worth losing.

In my mind's eye, I visualize race-traitors such as the FORMER White cuck in the photo (above) as another in a never-ending conga line of hand-wringing, guilt-ridden, White liberal Marxists who wash the webbed feet of niggers; and who allow cannibalistic niggers to put a rope around their neck and make them march, single-file, in lockstep while sobbing softly as they apologize for the horrific "sins" of the White race against the buckwheats, feral simian nigger savages.

If the guy had any morals and scruples--which he obviously lacks--he'd do the only honorable thing remaining which would be to take his own life since, at this point, it is worthless. Race-mixing and miscegenation are the very worst of the worst crimes against the White race in general, and against pro-White activists, those who protect and defend the White race, in particular.
Any White person who can see the threat to the future of the White race today and who refuses, whether from cowardice or selfishness, to stand up for his/her people does not deserve to be counted among them.
Top

White_Vengeance, you have a most remarkable and entertaining way with words.

I realize that the subject and theme of this Thread is, "Products to Boycott Because of Sick Television Advertisements." I have not watched television in decades so, oftentimes, I am not "privy" to these anti-White television advertisements that are seen by my counterparts. Many years ago I made a stern commitment to stop watching the poisonous, diabolically evil, jew-tube. However, I spend enough time on the Internet so that I am exposed to countless anti-White advertisements. These anti-White, discriminatory advertisements have now gone beyond a watershed moment; low IQ, feral simian negroes literally inundate, flood, and swamp the advertisement world of the Internet. It is inescapable--the barbaric negro is now not only ubiquitous, but the "featured" species in almost every advertisement across the vast digital landscape of wireless communication, transmission, and video.

There are a number of outstanding posts in this Thread that "call out" disgusting, disgraceful, anti-White advertisements in which they not only openly discriminate against our proud White race but that subjugate our White race to the lesser species that roam the Earth--most notably the barbaric, subhuman, cannibalistic negro species. As a proud, racially-conscious, pro-White activist I try, to the absolute best of my ability, to avoid patronizing ANY store, company, establishment, organization, entity, etc., that discriminates against my magnificent White race.

Many times I've walked into a store or business, saw that I'd be forced to deal with ignorant, low IQ negroes who were undoubtedly affirmative action hires. Sensing the worst, I simply did an "about face" and departed the business, never to return.

The incidence of anti-White advertising and anti-White bricks-and-mortar establishments and businesses grows rapidly and seemingly by orders of magnitude. It is as though an "anti-White faucet" has been turned ON, full force, and cannot be shut off. Seeing the staggering amount of anti-White advertisements and businesses at times causes my emotions to run the gamut from anger to disgust to downright agitation. I internalize that we Whites are now foreigners in the very nation that we discovered, claimed for Europe, founded, settled, populated, cleared, expanded, built, advanced, and remarkably-and-amazingly improved.

I do sincerely appreciate the efforts of all those on the White Biocentrism site who contributed mightily to this Thread with their enlightening and timely posts about which companies we Whites should boycott and why we should obviously boycott them.

Having said that, I'd like to change the tenor of this Thread, if only for a short while, and put a bit of a positive spin on it. Yes, the Thread is devoted to identifying companies, corporations, establishments, etc., that overtly display an intentionally insulting and humiliating attitude toward White people, and even go to unbelievable extremes to discriminate against us.

Sensing that too much anti-White anything can eventually create disheartenment and despondency in the ranks in even the most iron-willed, stern individuals, I chatted with one of my dear pro-White friends and compadres who is an outstanding, never-say-die White Nationalist about this very matter. This friend has spent years compiling lists of pro-White businesses, establishments, self-employed people, and a variety of other pro-White entities, and he has created his own Website in order to publicize his outstanding work.

Since he knows that I am a member of the National Alliance, and he has the utmost respect for our organization, I asked him for his permission to post links to his Website. He graciously agreed with one caveat: that I not publicize his full name. Of course, with the brainpower of the people who frequent the White Biocentrism site, in a matter of a few hours you'd likely be able to uncover the creator of this fine, upstanding Website.

The important thing, though, is the fact that EVERYTHING on his Website has a decidedly pro-White bent; there are no negatives whatsoever. He will not allow such a thing. All one must do is access his Website through the link I've provided (below). If you see something that is a benefit, then by all means take advantage of the opportunity. Doing so will not only benefit you, but it will benefit the company, corporation, self-employed businessperson, etc., with whom you plan to do business. The intrinsic benefit is that it will be benefitting the whole of the White race, to the detriment of our enemies.

I take no credit whatsoever for any work associated with assembling this outstanding Website; all the credit must go to my buddy. My efforts are limited only to creating this post. I will, however, update the link to the Website as my pro-White activist buddy updates his lists by adding new businesses, establishments, self-employed people, entities, etc.

Here is the link to my pro-White activist friend's Website (directly below this paragraph). If and when you access the Website, please, time permitting, provide feedback. It is imperative to provide feedback to continually improve this most important endeavor. The name of the Website is the "Patriot Portal." Thank you for your undying support and cooperation, and I hope that you'll find your search beneficial, valuable, and exceptionally pro-White in every regard.

http://www.patriotportal.org/
Any White person who can see the threat to the future of the White race today and who refuses, whether from cowardice or selfishness, to stand up for his/her people does not deserve to be counted among them.
Top

Can you ask your friend if he'll put more links to our organization in his directory? For example, he can add National Alliance to the "Communities" section, and maybe put williamlutherpierce.flawlesslogic.com to the "Research Archives."
H0216
Top
Post Reply
27 posts