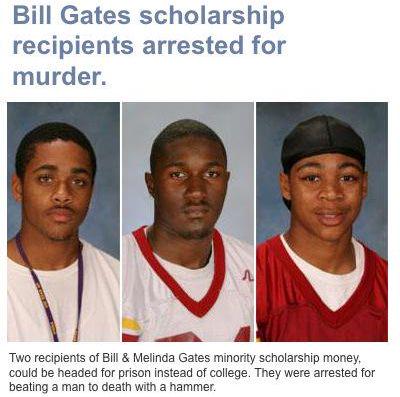 When I saw a webpage by the “National Policy Institute (NPI)” titled Bill Gates: White kids not eligible for my scholarships I thought it was just a baseless rant. The commentary didn`t provide any references which added to my skepticism that it was a hoaxI decided to do some research in order to debunk this rumor before it starts racing through the internet. Much to my displeasure I confirmed that it`s true that the Bill Gates scholarship intentionally excludes white people. Actually it excludes many races besides Caucasian. Keep reading to understand how I came to that conclusion — and don`t worry — I will provide enough references to make your head spin!

The first place to go is the source — the Gates Millennium Scholarship home page. The NOMINEE PERSONAL INFORMATION FORM 2010 reveals a few disturbing surprises — scroll down to Item #8 where you will find that U.S. Residency is required, and then you must choose from the following choices:

U.S. Citizen
Permanent Resident / National
If you are a permanent resident or a foreign national you are required to enter your “COUNTRY OF CITIZENSHIP”. So, in other words you don`t have to be a U.S. Citizen but you do have to be a legal alien, which might mean nothing more than having a student visa. It might sound like anybody in the world is welcome to apply for the scholarship but item #9 quickly disproves that idealistic notion. My first impression is that somebody made a mistake on the form:

Race/Ethnicity – REQUIRED (YOU MAY CHECK ONLY ONE, EVEN IF YOU IDENTIFY WITH MORE THAN ONE OF THESE GROUPS. IF CHECKING AMERICAN INDIAN/ALASKA NATIVE,ASIAN PACIFIC ISLANDER AMERICAN, OR HISPANIC AMERICAN, ALSO IDENTIFY A TRIBE OR ETHNIC SUBGROUP IN THE BOXES PROVIDED.)

You must choose one of the following: By now you have noticed that “Caucasian” isn`t offered as a choice but at this point I thought it was a mere oversight. The FAQs page gives answers to some of the obvious questions:

If a person is applying for their permanent residence or U.S. Citizenship are they eligible to apply for the Gates Millennium Scholarship?

A student is eligible to apply for the Gates Millennium Scholarship if (he or she) is a citizen, national or legal permanent resident of the United States

What are the requirements for the American Indian/Alaska Native designation for Gates Scholar Nominees?

American Indian/Alaska Native students will be asked to provide proof of tribal enrollment or certificate of decent from a state of federally recognized tribe if selected as a GMS candidate finalist.

What are the eligibility criteria for the GMS program?

Students are eligible to be considered for a GMS scholarship if they: â€˘Are African American, American Indian/Alaska Native, Asian Pacific Islander American or Hispanic American â€˘Are a citizen, national or legal permanent resident of the United States

The NPI report isn`t new news as you will see from the following papers.

Theodore Cross, writer at the The Journal of Blacks in Higher Education, wrote a paper in 1999 that discusses the history of the Bill Gates scholarship: “Bill Gates` Gift to Racial Preferences in Higher Education“. Make no mistake, Cross thinks it`s a darn good idea that Gates discriminates against whites, and he isn`t very subtle about it either:

Racial conservatives are correct. The huge billion-dollar Gates Millennium Scholarship program is racially discriminatory. The terms could not be cleaner. Whites may not apply!

Theodore Cross hasn`t been very sympathetic in other writings either: The Folly of Setting a Grand Theory Requiring Race Neutrality in All Programs of Higher Education“, 2000.

If you believe that there should be no room whatsoever for any race-conscious policies in higher education, have a careful look at the legions of university programs that are now in place. You may then change your mind. In fact, what you see may cast some doubt on the theoretical underpinnings of the Hopwood ruling banning all considerations of race in student admissions.

Cross has written many other papers, like for instance: “Barack Obama is the Superior Choice for African-American Voters“, 2007.

For the first time in the history of our country, a black man has a credible chance of becoming president of the United States. After the long nightmare years of slavery, lynchings, Jim Crow, and enduring race discrimination, one would expect that, in the upcoming presidential primary contest, Illinois Senator Barack Obama would be the overwhelming choice of black American voters.

I want to conclude with a few other opinions mostly because it`s interesting to see the cold and indifferent ways discrimination against Caucasians is discussed in academic circles, and how widely it`s understood that the Gates scholarship is discriminatory.

The Impact of the Gates Millennium Scholars Program on Selected Outcomes of Low-Income Minority Students: A Regression Discontinuity Analysis, Stephen L. DesJardins, Center for the Study of Higher and Postsecondary Education, University of Michigan and Brian P. McCall, Carlson School of Management, University of Minnesota. October 2006

The Gates Millennium Scholars (GMS) program, funded by the Bill & Melinda Gates Foundation, was established in 1999 to improve access to and success in higher education for low-income and high-achieving minority students by providing them with full tuition scholarships and other types of support.

Estimates are provided for each of the minority groups covered by the scholarship (African Americans, Asian Americans, and Latino/a students).

Considering all of the open talk that has occurred for over a decade of time about the Gates scholarship, it`s truly amazing that whites have been so silent. Maybe they don`t care whether their kids get lucrative scholarships, or maybe they feel that designated minorities deserve preferences. Go figure!

Re: Bill Gates: White kids not eligible for my scholarships

If only "educating" non-Whites were at issue here.

What's being taught in colleges and universities is a universal hatred for Whites. This is behind a lot of non-White on White violence seen in increasing numbers throughout this land--but what's worse is that these are the people being groomed for manning the country's institutions. Having talked to a few of these so called educated non-Whites (online, fortunately!) I believe they would continue and possibly worsen anti-White discrimination.

Using the courts, it's entirely possible they will eventually legalize the murder of Whites by refusing to try or convict non-White murderers.
Activism materials available! ===> Contact me via PM to obtain quantities of the "Send Them Back", "NA Health Warning #1 +#2+#3" stickers, and any fliers listed in the Alliance website's flier webpage.
Top
Post Reply
2 posts • Page 1 of 1