'The Turner Diaries' Influence On White Nationalists
3:49
DOWNLOAD
TRANSCRIPT
April 2, 20195:08 AM ET
Heard on Morning Edition
The Turner Diaries is a fictional dystopic novel that's served as a foundational piece of white nationalist propaganda. It was written in the 1970s but its hold on the movement can be traced to today.

The mass shooter in Christchurch, New Zealand, last month wrote the number 14 on his gun, a reference to a 14-word phrase that's popular among white nationalists about securing a future for white children. The phrase was coined by a terror group known as The Order, which took its name from a book of fiction called "The Turner Diaries." NPR's Andrew Limbong reports on why that book continues to have such a lasting effect.

ANDREW LIMBONG, BYLINE: "The Turner Diaries" is a piece of dystopic fiction that ends in a nuclear war after which all nonwhites are killed. It was written by a man named William Luther Pierce.

J M BERGER: Pierce had come out of the neo-Nazi movements of the '60s and early '70s.

LIMBONG: That's J.M. Berger. He studies extremism of all types at Swansea University School of Law and has published a paper about "The Turner Diaries" for the International Centre for Counter-Terrorism. Berger says Pierce wanted to broaden the appeal of white nationalism.

BERGER: The ostentatious display of Nazi paraphernalia, for instance, was counterproductive and made it harder to recruit ordinary people. His goal was to radicalize ordinary white people.

LIMBONG: So Pierce appealed to those who fear gun control as well as minorities.

BERGER: What follows is a description of a long guerrilla campaign and battle back and forth with this minority government.

LIMBONG: Told through the diaries of a man named Earl Turner. Janet Wilson teaches postcolonial literature at the University of Northampton. She's written about the language used in "The Turner Diaries." She says there's a powerful effect to have this story be told specifically through fictional diary entries.

JANET WILSON: Well, a diary gives immediacy, as the first-person point of view always does. But with the diary, you have reflections.

LIMBONG: You're not with Turner when he commits various acts of horrendous violence. You're with him as he processes, rationalizes and justifies them.

WILSON: You feel the struggle. You don't feel sympathetic, particularly, towards this person, yet you recognize that he's in a cause.

LIMBONG: The main fear in the book is demographic change, particularly through race mixing. There's one chapter devoted to hanging thousands of white people, mostly women, for being in relationships with a nonwhite person. Turner notes in his fictional diaries that this was, quote, "a grim and bloody day, but an unavoidable one." The violence, how they systematically raid houses and pick who lives and who dies, is plainly laid out in instructional detail. But the ideology is more broad says, J.M. Berger, to appeal to different branches of white nationalism - religious, atheist, pagan.

BERGER: So that you can kind of come through it and bring your own ideology and take away a plan of action.

LIMBONG: Berger's research lists a number of terrorists who have been inspired by "The Turner Diaries," including the Oklahoma City bomber. And he says the novel's influence has only grown as the text became widely available and discussed online, including the same message board where the Christchurch shooter first announced his plans. And Berger says the book's influence will continue online in part because we treat it differently from other extremist content. For example, ISIS.

LIMBONG: "The Turner Diaries" ends with Earl Turner murdering himself for the cause of white nationalism. The fictional book is one of the most important texts of white extremist propaganda, and it will likely continue to be a useful recruiting tool.

Sounds to me like they are arguing for stripping Whites of their free speech rights.
Top

Colin wrote:Sounds to me like they are arguing for stripping Whites of their free speech rights.

Yep, but what else can one expect from National Bolshevik Radio? Here's another NPR article, an interview with Mr. Berger, the expert on extremism, with just as many inaccurate statements in it as the one posted above: https://www.npr.org/templates/transcrip ... =706482037

Berger is likely a Jew. This is not confirmed, but he, like so many Jews, is a so-called expert on extremism and terrorism, and has co-written a number of articles and books with the Jewess Jessica Stern, another go-to expert controlled media call on when it comes to the Jews' favorite subject: anti-Jewish extremism and terrorism.

The Turner Diaries, the infamous racist dystopian novel by neo-Nazi William Luther Pierce, has inspired more than 200 murders since its publication in 1978, including the single deadliest act of domestic terrorism in U.S. history, the Oklahoma City bombing.

The book is arguably the most important single work of white nationalist propaganda in the English language, but it is not a singular artifact. The Turner Diaries is part of a genre of racist dystopian propaganda dating back to the U.S. Civil War. This paper will document the books that directly and indirectly inspired Turner and examine the extensive violence that the novel has inspired.

By comparing and contrasting The Turner Diaries to its less-remembered predecessors, this paper analyses the reasons for the novel’s lasting impact, including its focus on rational choices over identity choices, its simplification of white nationalist ideology, its repeated calls to action, and the powerfully persuasive nature of dystopian narratives, which can be understood as a secular analogue for religious apocalyptic texts.
https://icct.nl/publication/the-turner- ... dly-bible/
---

Were it not for Dr. Pierce's 45-year-old novel, Mr. Berger would have to get a job writing about another subject.

The good news is that there is usually a spike in sales of The Turner Diaries after these mentions of the book in controlled media outlets. Curious NPR listeners who will order it, wondering what all the fuss is about with this so-called "Deadly Bible," will get the brand new, expanded and improved third edition.
--- 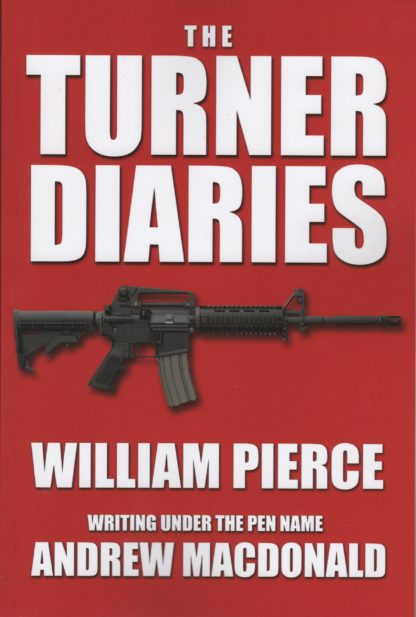 Alt History
How a self-published, racist novel changed white nationalism and inspired decades of violence
J.M. BERGER
SEP 16, 2016
Before there was an alt-right, there was The Turner Diaries...

The Turner Diaries was created in the 1970s by William Luther Pierce, leader of the neo-Nazi group the National Alliance. Crudely written and wildly racist, The Turner Diaries has helped inspire dozens of armed robberies and more than 200 murders in the decades since its publication...
---
https://www.theatlantic.com/politics/ar ... sm/500039/
Top


LIMBONG: Berger's research lists a number of terrorists who have been inspired by "The Turner Diaries," including the Oklahoma City bomber.

Conflating pro-White speech with violence, something Jews are good at. Read their Talmud sometime (in translation if you have to) and you'll see plenty of violence in their creed. Projection? Maybe!

LIMBONG: "The Turner Diaries" ends with Earl Turner murdering himself for the cause of white nationalism.

Stupid comment. Earl Turner gladly and willingly sacrificed his life for principles Dr. Pierce was conveying in The Turner Diaries, those principles being the cause of Cosmotheism. He most definitely didn't "murder" himself.


LIMBONG: The main fear in the book is demographic change, particularly through race mixing.

So race exists, eh? Thank you for confirming this. And fear? Hardly. Miscegenation usually produces the natural feeling of revulsion, if feelings are what we're talking about here. Eradicating it requires very good reasons, and Dr. Pierce spelled it out very well throughout the decades--real Cosmotheists act with the best philosophical creed and facts available, not their emotions.
Activism materials available! ===> Contact me via PM to obtain quantities of the "Send Them Back", "NA Health Warning #1 +#2+#3" stickers, and any fliers listed in the Alliance website's flier webpage.
Top
Post Reply
4 posts • Page 1 of 1