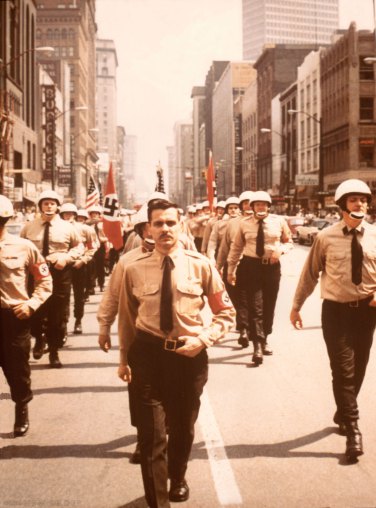 My first thread here and what do I say? I noticed the name Matt Koehl being mentioned here, and my decision became a no-brainer. 2507 North Franklin Road will always stick in my memory. It was the address for the NSWPP headquarters in Virginia, and my job was working on "White Power" newspaper and the "NS Bulletin", then later also as membership secretary. I was a long way from home, and at an earlier party congress, I and another comrade were given a set of NS slides for the "furthest traveled". I had never flown in an airplane before, and it was from a far corner of the Pacific northwest.

So the next year after that party congress, I decided to leave my job and work for the NSWPP. My sleeping quarters were situated next to Commander Koehl's office. Earlier I had stayed at our 'barracks', but when Lieutenant Homan departed back to the Pacific northwest, he left the spare headquarters bedroom. I recall a couple of times when Commander Koehl walked into his office in the morning and bellowed out "........ get up"! We were all working various hours sometimes, and sometimes you hoped to get in a few more winks! One time Commander Koehl informed me that they had a contact in the FBI. And some of us had taken a tour of the FBI headquarters in D.C. at the time. He informed me that the FBI knew I was there.

I recall once when I chauffeured Commander Koehl on a mid-west tour. He was very serious about our destiny and future, but there was the humorous and joking side to him also. He was driven by commitment alone. I heard that he was criticized during Commander Rockwell's time, by some members for his insistence on focusing on our goal and nothing else. So if it wasn't related to the mission, it wasn't worth discussing. Anything mundane wasn't worth discussing. That was Matt Koehl.

May I ask who wrote this? The author's name and date are missing-- unless my device is really slow at loading it.
Activism materials available! ===> Contact me via PM to obtain quantities of the "Send Them Back", "NA Health Warning #1 +#2+#3" stickers, and any fliers listed in the Alliance website's flier webpage.
Top

by Matt Koehl
It has now been 50 years since the end of World War II. For many that conflict seems like so much ancient history. But the anniversary ceremonies and revelry of the military victors at this time remind us that there are those who will not soon let us forget. And so it is fair to ask: Why did we — the peoples of America, Canada, England, France, Australia, New Zealand and South Africa — go to war in the first place? Many explanations have been offered: It was to stop dictatorship and aggression, to preserve freedom and democracy, to save the British Empire, to save little countries, etc., etc. When the filter of simple truth is applied, however, everything boils down to a single issue: the pathological desire of certain interested parties to destroy Adolf Hitler and his Idea. In other words, World War II was nothing than a war against Hitler.

In this war, all the various interested parties — Bolsheviks, international bankers, reactionaries of all kinds, but especially Jews — discovered that whatever differences they had paled in comparison with their common interest in destroying this man and his Cause. Clad in a cloak of pretense, this unholy alliance promised that without Hitler there would be a better world — a world of freedom and democracy, a world without fear and want, in which good would triumph over evil. Just how sincere their pronouncements were can be best judged by the rape, pillage, ethnic cleansing, torture, kangaroo courts, show trials and slaughter of millions throughout Europe which took place following “liberation.”

So what kind of world did the victors of 1945 actually give us? Take a good look. For five decades, they have had an opportunity to show us their world without Hitler. What kind of world is it? For starters, they have given us an endless series of conflicts, including the Korean and Vietnam wars, in which countless thousands of lives have been wantonly wasted. They also gave us a Cold War, with its massive expense and squandering of resources. They gave us a world of rat-race consumerism, self-fixation, environmental devastation, pollution and race-mixing. They altered the national demography and introduced us to integration, busing, Affirmative Action, minority quotas, sensitivity training, Black History and — The Holocaust. They gave us permissiveness, drugs, MTV and teen suicide. They gave us safe sex and unsafe streets and gun control. They gave us rock ’n roll and rape-counseling centers. They gave us “alternative lifestyles,” sodomy, AIDS, filth, perversion, chaos, crime, corruption, dumbing down, and insanity of every kind.

This is the kind of world they have given us, and it constitutes an appalling indictment. In no way can we blame Hitler for this world. He was absolutely opposed to this sort of thing, and he fought and sacrificed everything to prevent just such a world. But the victors of 1945 fought to destroy this man, so that they could bring about their world — which is what we now have. This is what they created in World War II, and for this they must be held accountable. The year 1945 was a defining moment, a watershed in history — the last great victory of the Old Order — which decided the kind of world we have today. Everything that is now taking place about the globe is causally linked to the outcome of that great conflict which took place a half century ago.

This causal relationship is the under-riding reality behind our present condition. And this condition can never be altered until that fact is generally recognized and we have come to grips with it. In reassessing our participation in the Second World War, we can come to but one conclusion: We fought on the wrong side. And the willingness to admit this simple fact is the necessary first step for any nation or racial recovery. Back in 1959 there was a man who did have the courage to recognize this fact and who did realize that we fought on the wrong side against Adolf Hitler in World War II. His name was Lincoln Rockwell. And exactly 40 yours after the Leader first raised the Banner, this great apostle was to raise the fallen standard anew. It is an example for all of us. Although a military phase of the National Socialist struggle ended in 1945, the war declared by world Jewry against Hitler in 1933 has not ended. Today this enemy — in the pathological pursuit of its Messianic designs — continues to wage war against the Leader.

And so the fight is joined. And this time we have an opportunity to be on the right side in this ongoing war. And instead of fighting against Hitler, we can now fight with him and for his New Order. No greater honor or privilege can one ever have.

This is not just an article on Matt Koehl, but a strong message and reminder that we fought on ...... Let us NEVER forget that!