Camp of the Saints

I read The Camp of the Saints about three years ago. Though it tells an interesting story about the overrunning of France by Indian boat people, neither the story or the author should be construed as "pro-white". Raspail, in at least one interview, confessed that whites were doomed, basically admitting there was no hope for us. And the "heroes" of the story (some of them at least) believe in "good darkies" as opposed to the bad ones, basically saying that a multi-racial society can be good, under certain circumstances. That said, I think there are several "white nationalist" novels that are superior, at least in some ways. Just an opinion, of course.
Top

A White Nationalist wrote:I read The Camp of the Saints about three years ago. Though it tells an interesting story about the overrunning of France by Indian boat people, neither the story or the author should be construed as "pro-white". Raspail, in at least one interview, confessed that whites were doomed, basically admitting there was no hope for us. And the "heroes" of the story (some of them at least) believe in "good darkies" as opposed to the bad ones, basically saying that a multi-racial society can be good, under certain circumstances. That said, I think there are several "white nationalist" novels that are superior, at least in some ways. Just an opinion, of course.

Sure there are, like "Hunter" or "The Turner Diaries" or "Serpent's Walk", to just name a few.

However, the major theme of the novel, "the over-running of Europe by non-Whites" has really
happened and is still happening:

The question is, what should all Whites of good will be doing about these
non-White invasions of their own traditional White homelands?

And what should White Americans do about all of those "press-titute"
race-traitors like a Chris Matthews that are all cheerleaders for this?

I think everyone here at WB knows the answers that Dr. Pierce would
give to these two questions. These questions need to be all answered
for our own selves and as to whether "our Race" is to be or not to be.

ALL LIFE on this PLANET quite literally DEPENDS UPON how we answer
these questions and whether or not we are able to rise to the occasion
and actually do our duty for it.

Earth, with "C"'s surrounding it from
both sides, and protecting it, our only
home for now, with our "Cosmotheism".
Top

I have been meaning to read this book, have not gotten around to it yet. It is on my amazon wishlist.
http://racialobserver.com articles, bookstore, news
Top

Though fiction, Camp is a must read for the racially conscious. The events of last week and before are like "life imitating art" to anyone who has read Raspial's novel.
--- 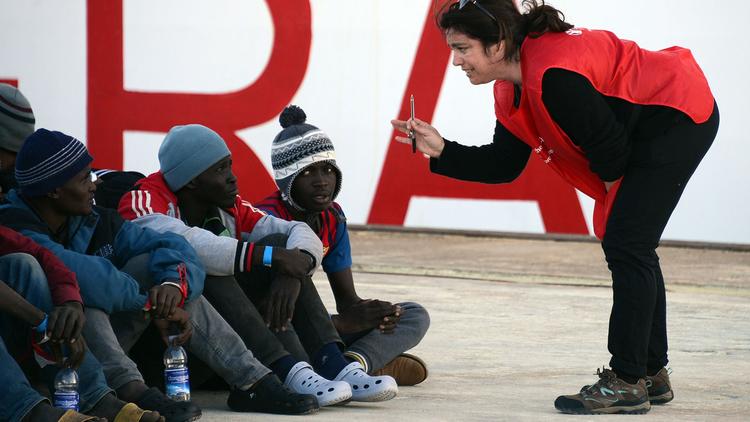 Shipwrecked migrants listen to an Italian Red Cross worker after disembarking from a rescue vessel in the Italian port of Augusta on April 16. (Giovanni Isolino / AFP/Getty Images)

The latest tragedy at sea was compounded by violence as police in Sicily announced Thursday that they had arrested 15 Muslim migrants on suspicion of throwing Christians off a boat after a religious argument.

Acting on statements from Nigerians and Ghanaians among the 100 passengers on board the boat, Italian police arrested and jailed migrants from Mali, Senegal and the Ivory Coast on suspicion of “multiple aggravated murder motivated by religious hate."

Reports of the 41 deaths were given by four survivors of an inflatable dinghy carrying 45 migrants that reportedly sank after leaving Libya. Plucked from the sea by a rescue helicopter, the migrants were taken to the Sicilian port of Trapani.

Earlier this week, aid groups reported that 400 people drowned when a fishing boat ferrying migrants capsized. About 145 survivors of the incident said the boat had set out with about 550 passengers on board, many packed into the lower deck.

When a cargo ship appeared on the horizon, people on deck rushed to the side of the ship to wave, prompting the boat to keel over and sink. Rescuers only located nine bodies in the sea, suggesting many remained trapped below decks as the ship sank.

Forty-one African migrants drowned in the Mediterranean on Thursday, survivors told rescuers, pushing to more than 900 the number who have died this year making the perilous sea crossing from Libya to Italy.

The incident occurred during a week in which over 10,000 people took advantage of calmer weather in the Mediterranean to leave Libya, where migrants and refugees waiting to cross have increasingly become victims of militia violence.

The litany of drownings brings the number of migrants dying this year en route to Italy to over 900, up from 17 by this time last year.

With about 18,000 migrants and refugees arriving in Italy so far this year, observers predict that the total in 2015 may outstrip the record number of 170,000 arrivals last year.

Reacting to the higher death toll, officials have said that Italian coast guard ships and patrol ships operating under a European Union mission are not able to reach boats as fast as the Italian navy ships that patrolled international waters looking for migrants before their mission was scrapped last year.

Jean-Francois Dubost, an Amnesty International official dealing with displaced people, said this week that the drownings highlighted the "horror of nothing having been sorted out in the Mediterranean” and charged that the European Union “has turned its back on its responsibilities and clearly threatens thousands of lives.”

The EU has said it will draw up a migration agenda for discussions by the end of May and finalize a report by Christmas.

I just ordered this and Bolshevism from Moses to Lenin the other day.
http://racialobserver.com articles, bookstore, news
Top The recent surge of non-White refugees into Europe from north Africa and the Middle-East could be straight out of Raspail's prophetic novel.


Although both a racist and non-Christian, I signed this petition anyway and urge others to: http://stop-immigration.org/en/

Solidarity with our European kinsmen!
Top

The French magazine Valeurs Actuelles recently did an interview with Jean Raspail.


At the point where we are now, the measures we would have to take would necessarily be very coercive. I don’t believe it will happen and I don’t see anyone who has the courage to do it. They would need to put their soul in the balance, but who is ready for that? That said, I don’t believe for an instant that the supporters of immigration are more charitable than me: there probably isn’t a single one of them who intends to welcome one of these unfortunates into his home… all of that’s just an emotional pretense, an irresponsible maelstrom that will engulf us.

Raspail is not a white nationalist. Like David Duke, he's okay with a multiracial society, provided it meets with his criteria. Also, for anyone who has read the afterward of his novel, he clearly states the world is/will be lost to non-whites. In short, if you had a white nationalist conference, he'd be one of the last people you'd want to invite - unless you'd want him to tell you why you're going to be overrun with darkies. Raspail is the epitome of someone who has stood up and said, "Hey folks, it's over! Whitey has lost! Your daughter's gonna marry a Ubangi and your grandchildren are gonna look like backed-up sewage!"

Will Williams wrote:Welcome to America! 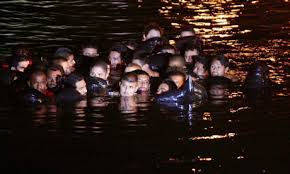 Here's a good cropped photo that's meant to play on the sympathies of the "diversity" lovers: 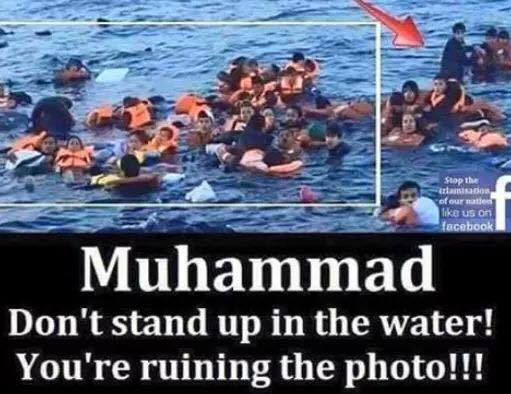 This Stunningly Racist French Novel Is
How Steve Bannon Explains The World
“The Camp of the Saints” tells a grotesque tale about a migrant invasion to destroy Western civilization.
By Paul Blumenthal and JM Rieger
Mar 06, 2017

Stephen Bannon, President Donald Trump’s chief strategist and the driving force behind the administration’s controversial ban on travelers from seven Muslim-majority countries, has a favorite metaphor he uses to describe the largest refugee crisis in human history.

“It’s been almost a Camp of the Saints-type invasion into Central and then Western and Northern Europe,” he said in October 2015.

“The whole thing in Europe is all about immigration,” he said in January 2016. “It’s a global issue today — this kind of global Camp of the Saints.”

“It’s not a migration,” he said later that January. “It’s really an invasion. I call it the Camp of the Saints.”

What ever happened to that Bannon fellow? He seems perfectly reasonable in this video, even though it's produced by the anti-White Huffington Post: https://www.youtube.com/watch?v=HC4SU8y74nU
Top
Post Reply
24 posts