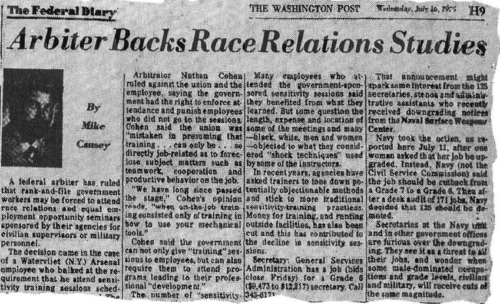 In 1984, the well-known political horror-fantasy by George Orwell, it was called the Two Minutes Hate. At eleven o’clock each morning the workers in all government offices assembled in front of television screens for a sensitivity-training session in which they released their pent-up hostilities and became, thereby, better-adjusted subjects of Big Brother.

In 1975 they don’t call it the Two Minutes Hate, but it amounts to exactly the same thing. Federal employees are increasingly being forced to submit to mind-bending group-therapy sessions designed to suppress “undesirable” attitudes — primarily attitudes toward members of racial-minority groups — and mold their psyches in directions deemed more suitable by the clever people who plan the therapy sessions.

Beginning (appropriately) in the Department of Health, Education, and Welfare and the now-defunct Office of Economic Opportunity a few years ago, the government’s sensitivity-training program is gradually being extended to other Federal agencies, both in Washington and in the boondocks.

Many government workers are complaining about this not-very-subtle program of thought control, but a recent decision in the case of an employee at the Watervliet (NY) Arsenal indicates that Big Brother is determined to press on.

Backed by his union, the American Federation of Government Employees, the Watervliet Arsenal employee argued that the government unjustly suspended him from his job without pay when he refused to attend sensitivity-training sessions which had been scheduled for workers at the arsenal.

A Federal labor arbitrator, Nathan Cohen, ruled against the union and the employee, saying the government has the right to enforce attendance and punish employees who do not go to the sessions. Cohen’s ruling will not halt all employee resistance to compulsory sensitivity training, but it will give the government an advantage in being able to threaten with dismissal all Federal workers who balk.

The Federal thought-control program is most solidly established in the Department of Defense. Under Secretary of Defense James Schlesinger sensitivity training has been institutionalized in each of the armed services as a mandatory part of the training of all personnel.

Some of the “shock techniques” used in earlier military sensitivity-training sessions are primarily responsible for the notoriety the program has received. Stripped of all insignia of rank, officers and enlisted personnel, Black and White, male and female, were herded into classrooms and subjected to various experiences designed to rub their noses collectively in the filth of racemixing.

In some sessions Black instructors would scream obscenities at White participants and encourage them to reciprocate: “You White honky motherfucker, call me a nigger! Come on, you honky bastard, you’re thinking ‘nigger’; now say it! ” The idea was to bring latent racial hostility to the surface, so that it could be dissipated.

In one Navy program at Charleston, S.C., a Black instructor took a White female assistant to the front of the class and fondled and kissed her, after a series of obscene “bedroom” remarks. The Navy received such strenuous objections to this program that it was temporarily halted.

But Federal psychologists have found that they are able to achieve their purpose just as well with more subtle techniques. One “final exam” devised by the mind-controllers, for example, simply involves passing a soft drink around the sensitivity-training classroom. Anyone in the racially mixed group who declines to take a drink from the common bottle is considered to have flunked.

Herd instinct — the drive to conform to group standards — is very powerful, and Big Brother’s experts have learned how to manipulate it in such a way that they can modify the opinions and attitudes of their subjects. The basic method used is to strip the individual’s personality naked, to deprive him of his privacy, to make him bare his innermost thoughts and feelings—and then to apply overwhelming pressure to him to make those thoughts and feelings conform to those of the others in the group. In the context of the sensitivity-training class, to be non-conforming is equivalent to being anti-social.

And the method works. Only persons of extraordinarily strong will and personality are immune to its effects.

Unfortunately, employees of the Federal government are not the only persons being subjected to the new thought-control program; workers in some industrial plants with Federal contracts are also being required to attend therapy sessions. Worse, pilot programs have been established in a number of the nation’s high schools.

Whereas the program for adults aims primarily at keeping natural racial hostilities in check, the high school programs are more ambitious. Their purpose is to utterly destroy any sense of racial identity in young Whites, to nip in the bud any incipient feeling of racial pride and replace it instead with self-hatred and guilt. The sensitivity trainers want to produce a new generation of racially castrated Whites — raceless White zombies who will blend unobtrusively into the multi-racial future they are planning for America.

In most cases the high school programs have adopted formats rather similar to the adult program, except that they have taken full advantage of the greater impressionability of their participants. But the thought-controllers are always experimenting, attempting to improve their craft.

One of their newer inventions is a “White studies” course for the White minority at the mostly Black Berkeley (CA) High School. It is called “What Is White?”

As proudly reported in the June 30 issue of Newsweek, the course complements “Black studies” courses in which Black students are taught that the only reason their race has a record of failure and lack of achievement throughout history is that the wicked and greedy Whites have held them back. Berkeley’s new “White studies” course teaches young Whites that they must accept the guilt for White repression of non-White races and try to make it up to them.

“After exploring such topics as prejudice and white culture,” reports Newsweek, the White students “come around to the view that the white man’s burden of guilt for America’s imperfections is really an opportunity and that there is much whites can do to help because of their position in society.”

One student who took the course, 17-year-old Anthony Cody, said: “I feel better about being white now. The course gave me the ability to deal with it.”

When the time comes to settle scores in America, there will be no place in hell hot enough for the depraved creatures responsible for destroying the racial consciousness of these White boys and girls. Meanwhile, however, the thought-controllers are going ahead as fast as prudence allows, and the number of young people being subjected to their program is growing at an alarming rate.

Unless Americans who still have the capacity to think for themselves act soon, that capacity may be taken from them; certainly it will be taken from their children. Unless we upset Big Brother’s plans, 1984 may be here in less than nine years.

transcribed by Vanessa Neubauer from the book The Best of Attack! and National Vanguard, edited by Kevin Alfred Strom