[quote]Cosmotheism asserts that we are matter and energy become conscious — and, more than that, that we are the Universe become conscious, that we are Nature become conscious of itself and all that that implies. It further shows us that we have reached a radically new stage in the evolution of the Universe — as significant, perhaps, as the evolution of non-living matter into living beings — as significant as the first rise of consciousness itself – as significant as the faltering steps of the first amphibians on the surface of the Earth. This new stage has come only recently, when European man first grasped the concept of evolution, and discovered the principles of genetics and heredity. It is the stage of conscious evolution — of the ability of living beings to direct, and vastly accelerate, the future course of their own evolution.[/quote]

For those of us whose consciousness has evolved to the stage where we are Cosmotheists who have become in that "awakening" stage have a question before us: how is it that we are to live our life that matches the evolution of our awakening state?

Is it by paying dues to the National Alliance and have others do all the things that needs doing, and simply going on about whatever business we were previously engaged in?
Again, I'd say no.

Are each of us just here to passively observe what's going on and simply give our Cosmotheist-based opinions on what is going on around us?
C'mon, let's be realistic here, we're not just keyboard warriors at some popular (or otherwise) "White nationalist" forum.

I'd say we're here to become active participants in as many Alliance activities as fits our natures to advance ourselves. It seems to me that if each of us isn't thinking about what to do on behalf of the creator's purpose everyday, if somehow we're not "leaving our mark" on the consciousnesses of our fellow Whites both within and without our Community we're really not Cosmotheists but bystanders in life who think (and probably talk) too much and do too little.

There's another Alliance member I've become acquainted with who lives several hundred miles away from me and is getting way up there in age. His health isn't the best. It's getting tougher for him to get around, meaning his mobility isn't what it was when he was younger. "Retirement" age for him came long ago. He might not even be long for this world. But I will say this about him, he has never quit being one of us, he's been at the heart of outreach efforts in his community for decades and continues even now. I'm quite sure he'll be doing something for Our Cause until his body completely quits on him. That's the kind of Cosmotheist I want to be. It's the same kind Dr. Pierce was as well.
Activism materials available! ===> Contact me via PM to obtain quantities of the "Send Them Back", "NA Health Warning #1 +#2+#3" stickers, and any fliers listed in the Alliance website's flier webpage.
Top

A correspondent sent this very good video that educates us further about the Life Rune symbol: https://www.youtube.com/watch?v=ZXWuDj-izLY


The ancient European Life Rune, the symbol of our National Alliance for more than 50 years, and which our Jewish enemies calls a "hate symbol," is well explained by Rune Master Arith Härger in his The Runes: Algiz ‮ᛉ‬ -- along with its deeper spiritual meanings and good advice that is rooted in the symbol.
--- 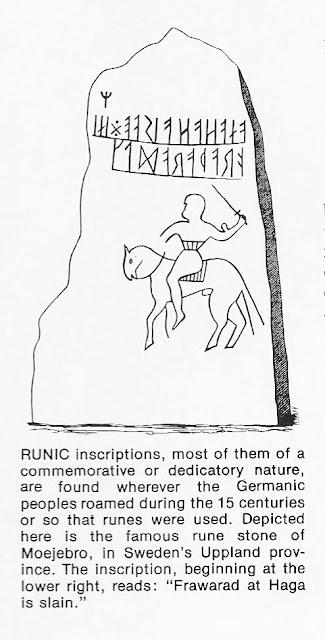 Printed on the inside cover of each NATIONAL VANGUARD is the statement: The symbol which appears in the NATIONAL VANGUARD logotype is the Life Rune. It comes from an ancient alphabet, or futhark, used in northern Europe for many centuries before the general adoption of the Roman alphabet there. The Life Rune signifies life, creation, birth, rebirth, and renewal. It expresses in a single symbol the raison d'etre of the National Alliance.

Like the cross and various sun signs, the symbol is an ancient one. Over 3,000 years ago the Germanic peoples of northern Europe carved it on rocks, along with other pre-runic figures, perhaps as a sign of a man with arms reaching upward and addressing the gods.


Later -- something between 2,000 and 1,800 years ago -- the Germanic peoples began using a script having 24 characters, with both phonetic and magical-symbolic values, called runes. These were organized in a system known as the "futhark." The name "futhark" derives from the initial sounds of the names of the first six runes, that is: feo - ur - thurs - asa - rit - kaan. This is similar to the way in which the word "alphabet" comes from the names of the first two Greek letters, alpha and beta.

In addition to the original Germanic futhark, there were two principle later runic systems: the expanded Anglo-Saxon, with up to 33 runes; and the reduced Norse, with 16 runes. Although many runes are common to the various futharks, the names and phonetic values of a given rune are not always the same. Most runic characters were made up of straight vertical and diagonal strokes to facilitate their carving on wood stone, and metal.

Over 5,000 runic inscriptions have been preserved. Although these were scattered by Norse rovers from Greenland to Greece, the vast majority of them are found in Sweden. Many of these are carved on commemorative monuments, or rune stones.

The more efficient Roman alphabet eventually supplanted the futhark for most purposes throughout northern Europe, but runes continued to be used in a few places -- especially in Scandinavia -- as late as the 17th century.

The origin of runes and the futhark is as murky as the water in the depths of today's polluted Rhine. The evidence is sparse, and scholars disagree in their interpretations of it.

Some authorities speculate that the futhark simply derived from German contact with Greek or North Italic writing, about 2,000 years ago. Others suggest that the futhark and the various southern European alphabets come independently from an older, common European script. Many German, Greek, Roman, and Etruscan characters did have similar forms. For example, the figure we call the Life Rune occurred in the early Greek and Etruscan alphabets, as well as in the Germanic futhark.

It even has been proposed that the futhark must have been the brainchild of one man, rather than an evolutionary development, much as the Gothic alphabet was the creation of Bishop Wulfila, and the Cyrillic alphabet was the work of St. Cyril. 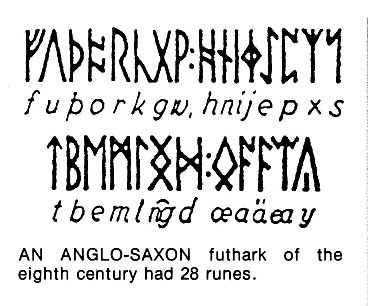 Runic writing was primarily used for Germanic religious and magical purposes: for gravestone inscriptions, for dedications, and for spells and charms. These roles overshadowed its function as a utilitarian script. The word "rune" itself comes from a Germanic root meaning a secret or a mystery; it implies arcane knowledge and wisdom. Runecraft was originally a private, esoteric practice, engaged in by those considered to be magicians. (Of course, in a preliterate society anyone who could communicate by writing might be thought of as a magician.)

Each rune had a name related to the sound of the character: names like "hail," "ice," and "birch." A single rune could stand for its name-word itself, as well as for the sound associated with that word. It was thought to have magical powers that could be used to evoke, or protect against, the force contained in that name. Runes were often inscribed on weapons, tools, and rings to give them talismanic powers.

The 15th rune in the original Germanic futhark is the one with which we are especially concerned here. It appears variously with diagonal strokes pointing upward, downward, or in both directions. All these forms represented the same sound, originally "z." Rune masters wrote individual runes up or down, left or right, without distinction. Nor was there any single convention for the direction in which lines of runes were written.

The symbol we call the Life Rune was not known as such in futhark times. In the original Germanic futhark this rune was known variously as the Axe Rune and the Elk Rune. It signified defense.

Later, in the reduced Norse futhark of the Viking Age, a formal dichotomy developed. The arms-upward rune was known as the Man Rune and had an "m" sound. The arms-downward rune had the strong palatalized "r." It was called the Yew Rune or "bow made of yew wood," a symbol of death. 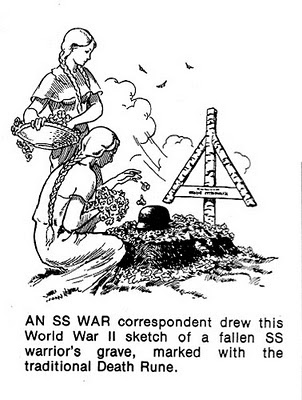 The medieval Christian church used the Axe Rune/Man Rune form as a variation of the cross. They simply bent the arms of the Latin cross upward at about a 45-degree angle to form a stylized crucifix, known as the forked cross. The shape is also suggestive of a tree. Gregory the Great, who was Pope from 590 to 604, wore a forked cross on his vestment. Fork-cross crucifixes are common in Westphalia and parts of Austria and Italy even today.

Conversely, enemies of Christianity -- Saracens, Satanists, and others -- bent the arms of the Latin cross downward to signify the crucifix broken. 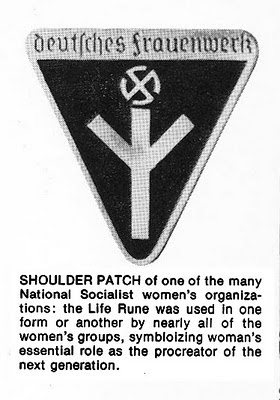 Scandinavian and Anglo-Saxon Christian churchmen were, in some respects, tolerant of Germanic tradition and dabbled in the use of runes as script. However, in the 17th century Iceland people were burned as witches because runic inscriptions had been found in their possession. An official prohibition of the use of runes was thought necessary in 1639. About that time many runic monuments were destroyed in Britain.


The National-Socialists were inspired by the rune lore of their remote Germanic past, and they made use of the Life Rune and Death Rune in many aspects of their cultural life.

Runic emblems were also a prominent feature of National-Socialist military and civil service regalia. Among the runes used were the Tyr Rune (after the Norse god of war for whom Tuesday is named), the Sun Rune, and the Life Rune. The Life Rune was used to identify members of National-Socialist women's associations, welfare workers, and medical personnel in a number of organizations.

The designers of the emblem conceived for the nuclear disarmament movement in the late 1950's -- later known as the "peace" symbol -- were aware of the Death Rune context. They described their design as a highly stylized human being with arms only slightly raised from a downward position in an attitude of hopelessness: a gesture-of-despair motif. They knew it was of ancient origin and signified the death of man. 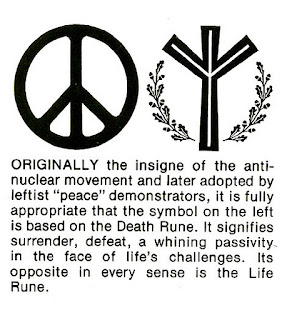 This, briefly, is the heritage of the Life Rune, used today as the symbol of the National Alliance, as well as of some groups in Europe.

The Life Rune is an ancient, sacred sign of our folk. It has had different aspects and meanings. Now it is up to us to give it yet a new one: to make it the emblem of White resurgence everywhere. Thanks for posting the last comment Will, the youtube video was very informative
Kinsmen die and cattle die,
And so must one die one’s self,
But there is one thing I know which never dies
And that is the fame of a dead man’s deeds.
Top

I liked it, too, Albert. That fellow knows his stuff.

It is our symbol of choice, thanks to our founder, That piece in NV magazine in 1985 has served us well, but there is obviously more to the Life Rune than we knew.
Top
Post Reply
34 posts

Return to “Religion and Philosophy”