Will Williams wrote:I'm no fan of Trump or his fellow shabbos goy Republicans, but it's good to see the Democrats have to eat some crow over Trump's exoneration from the so-called Russian "collusion," nearly two-year witch hunt.

Jewish presstitute Rachel Maddow left her vacation in Tennessee (fishing, allegedly) early to go on air in regards to this news and seemed to be crying about it. Although her sadness is likely due to Trump not having been indicted, she ought to be sad for being shown up as being a purveyor of fake news for (at least) the past 2 years.

As the credibility of those in the Jewish media sinks ever lower, it presents an opportunity for us to learn again that reliance on the truth of all matters is critically important for those (like us) who have a message, worldview, and/or plans for shaping the future if those are to have lasting value. That Jews are apparently shortsighted in this regard indicates to me that they're not as smart as some give them credit for.
Contact me via PM to obtain quantities of the "Send Them Back" stickers. Also available are the "NA Health Warning #1" stickers, and any fliers listed in the Alliance website's flier webpage.
Top

Perhaps! Something that one might need hipwaders for, I've heard.

Hipwaders, incidentally, that aren't sufficient for us Whites when it comes to wading through the excretions of her broadcasts. There's too much of it. Full scuba gear required to listen to that crap. This might explain the low ratings!

Contact me via PM to obtain quantities of the "Send Them Back" stickers. Also available are the "NA Health Warning #1" stickers, and any fliers listed in the Alliance website's flier webpage.
Top

"...Russians could simply look at America sliding down and make the offer. Putin could set this up in the 2020s and create these zones for political refugees to enjoy freedom and their way of life. The offer will be for a price, but American citizens and their immediate families could move to Russia’s Amerikanskiy Zone."

"...Russians could simply look at America sliding down and make the offer. Putin could set this up in the 2020s and create these zones for political refugees to enjoy freedom and their way of life. The offer will be for a price, but American citizens and their immediate families could move to Russia’s Amerikanskiy Zone."

That was interesting. Thank you for the link bringing that back up. It would be sort of like the Irish migration that populated the Appalachian region in the early 1800s.
Top

Anything that exposes the crooked anti-Russian U.S./Ukrainian machination has to be good for the Russian speaking people in Eastern Ukraine and in Crimea. https://russia-insider.com/en/politics/ ... 783933ad8e
---

Ukrainian Jew Dressed as US Army Colonel
Slanders His Commander-in-Chief
Alexander Vindman, a 'top Ukraine expert' and political opportunist, will whine about Trump before Congress because he has no conflict of interest whatsoever
Lee Rogers (The Daily Stormer)

The hoax impeachment inquiry against Donald Trump is almost entirely Jewish in nature. This is just a fact. It is being led by the subversive Jew Adam Schiff and further amplified by Jewish media outlets like CNN, MSNBC, The New York Times and others.

That’s why it was not shocking to see that this military man they found to testify against Trump in these stupid closed door hearings is a Jew. And not only is he a Jew, but he’s a Jew who is said to be a former refugee from the Ukraine. 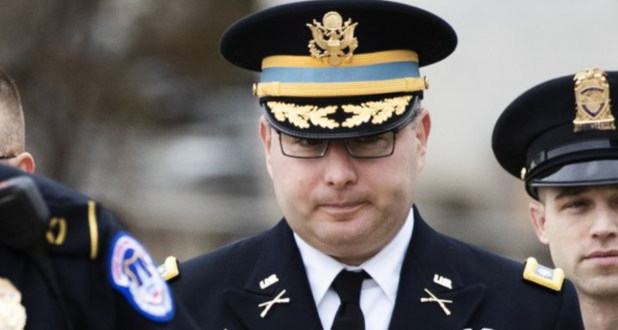 The optics of this are so ridiculous that there are numerous people in the mainstream who are openly questioning the political loyalties of this Jew. And as expected, the Jewish media is kvetching about it.

After reports emerged that National Security Council member Lt. Col. Alexander Vindman was set to testify to Congress about his discomfort with President Trump’s Ukraine policy and actions, conservative commentators began implying that Vindman, a Jewish former refugee from Ukraine, was disloyal to the United States.

“Here we have a U.S. national security official, who is advising Ukraine while working inside the White House, apparently against the president’s interests, and usually they spoke in English,” Fox News Channel host Laura Ingraham said on Monday, referring to Vindman’s interactions with Ukrainian officials who asked him for advice on how to handle Trump. “Isn’t that kind of an interesting angle on the story?”

“I find that astounding,” replied former George W. Bush administration official John Yoo. “And some people might call that espionage.”

Vindman was born in what was then the Soviet Union and came with his family to the United States in 1979, when he was four. “Fox and Friends” host Brian Kilmeade cited his immigration history to say claim that Vindman “tends to feel simpatico with the Ukraine.”

“We all have an affinity to our homeland where we came from,” former Republican Rep. Sean Duffy told CNN, adding, “He has an affinity, I think, for the Ukraine. He speaks Ukrainian. He came from the country and he wants to make sure they’re safe and free.” When asked by CNN host John Berman if he thought Vindman was looking out for America first, Duffy refused to say yes.

The fact that people like John Yoo, Brian Kilmeade and other establishment types are raising questions about the loyalty of this Jew to the United States really says it all. They might not be directly questioning his loyalty because he’s Jewish, but just them questioning his loyalty is resulting in an insane amount of whining from Jews.

Jews Jerrold "No Neck" Nadler and Adam "Pencil Neck" Schiff are the two most prominent members of Congress pushing to impeach the U.S. Commander-in-Chief

The noise that these Jews are creating about this spectacle is only going to result in more people connecting the dots. Because it is now becoming increasingly difficult to ignore the fact that most if not all the key players involved in this impeachment coup chicanery are Jewish.

This is something that we absolutely have to make the average Trump supporter aware of. They’re obviously very unhappy with this impeachment circus and if we can show them that this is happening because of Jews, we should be able to convert a significant number of these people into proper anti-Semites.

Make no mistake about it, Jews are loyal to their race first and foremost. They are not loyal to whatever country they happen to reside in and that includes the United States. This has been a trait [of theirs] for thousands of years. They subvert and destroy nations from within. Nothing has changed with them [....]
Top

It turns out that the new president of Ukraine, Zelinsky, is a Jew, as was her recent Prime Minister, Groysman.
---

One must sign up or go on Faceberg to read the text of this dated New York Times article. 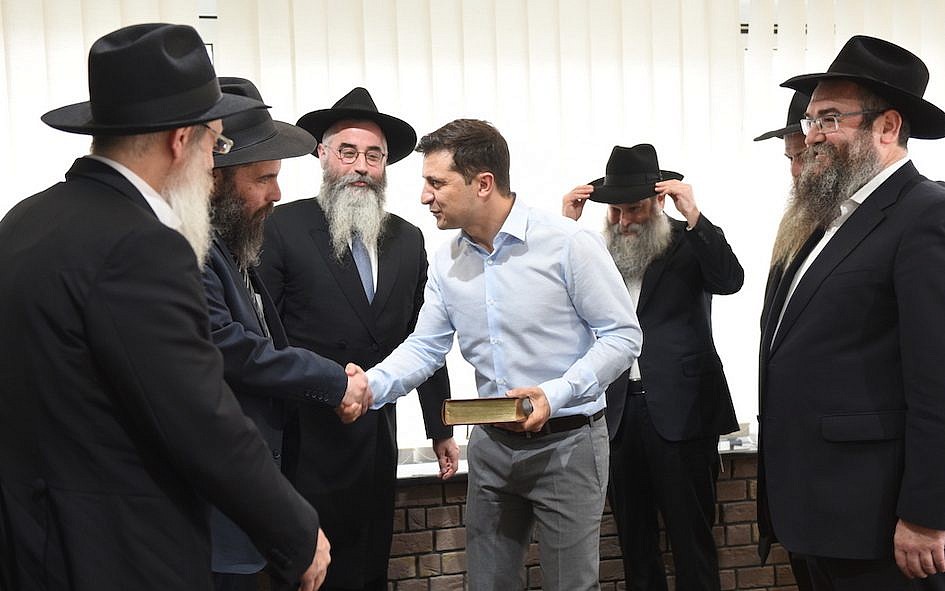 Ukraine Has a Jewish President and Prime Minister,
but It Is Still Rehabilitating Nazi Collaborators
AUG. 29 2019

During his visit to Ukraine last week, Benjamin Netanyahu, along with the country’s Jewish president, Volodymyr Zelenksy, visited Babi Yar—the ravine outside of Kyiv where the Nazis slaughtered over 30,000 Jews in a two-day massacre. There Netanyahu thanked Zelensky and the Ukrainian government for their “efforts to preserve the memory of the Holocaust [and] in the war against anti-Semitism.” Sam Sokol, by contrast, argues that since the 2014 popular uprising and the Russian invasion, Kyiv’s record in this regard has been more mixed:

[In 2015], the Verkhovna Rada, Ukraine’s parliament, passed a series of bills known collectively as the Decommunization Laws, meant to sever the country’s ties to its Russian and Soviet past. One of the bills prohibited what it called the “public denial of the legitimacy of the struggle for independence of Ukraine in the 20th century.”

In practical terms, these bills paved the way for the rehabilitation of Ukrainian ultra-nationalist figures like Stepan Bandera and Roman Shukhevych, leaders of the Organization of Ukrainian Nationalists (OUN) and its offshoot the Ukrainian Insurgent Army (UPA), respectively. Both men, and their organizations, collaborated with the Nazis and their followers and were responsible for the deaths of tens of thousands of Jews and Poles. Over the last several years, streets all over the country have been named after these far-right figures and steps have been taken to rehabilitate their images, casting them as fighters for democracy whose followers saved Jews from the Germans.

During this period, several efforts were also made to revise the history of Ukrainian participation in the Holocaust that directly involved Babi Yar. . . . In early 2016, Jewish groups harshly criticized Ukraine over an architectural competition aimed at revamping the site that sought to fix the “discrepancy between the world’s view and Jewry’s exclusive view of Babi Yar as a symbol of the Holocaust.” . . . In 2018, then-President Petro Poroshenko appointed the leader of the OUN’s current incarnation to a committee tasked with planning for the future of the site.

In many ways, [however], Ukraine has made strides in raising awareness of the Holocaust, especially compared to the Soviet period when mention of the genocide was prohibited. One of the ways it has improved can be seen in its support for a project promoted by the former Jewish Agency chairman Natan Sharansky to build a Holocaust memorial center at Babi Yar.https://mosaicmagazine.com/picks/politi ... aborators/
---

There may be hope for Ukraine after all, however. Jew Groysman had to step down as PM on 29 July (the same day as the article above) after losing election, replaced by an Aryan that some Jews are calling a "Nazi--sympathizer." 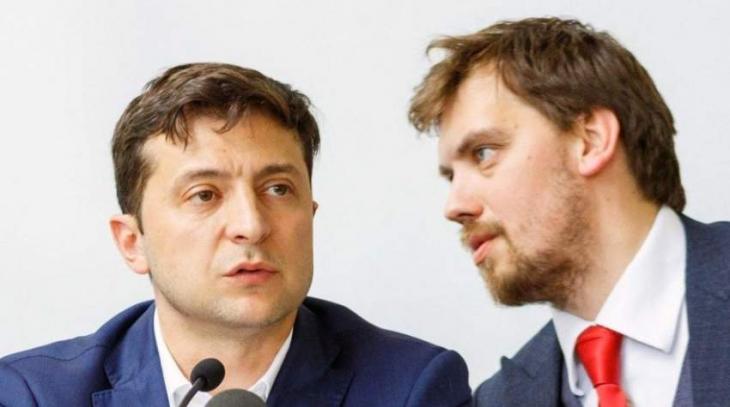 
The Real Scandal in Ukraine Involves,
You Guessed It, Nazis
NOVEMBER 1, 2019
BY JOE PONZILLO
[...]
Two weeks ago, Ukrainian Prime Minister Oleksiy Honcharuk was pictured at a Neo-Nazi rock concert

organized by C-14 (a spin off of Svoboda) militants who are currently on trial for murdering a reporter. Mainstream news outlets outside of the Times of Israel had no coverage of such a shocking scandal, and unless you happened to follow the newspaper of the American Communist Party, Peoples Daily, an american audience would never have known that the country its political leaders had been fighting desperately to supply with weapons had a Prime Minister headlining at a Neo-Nazi event!
Top

Mr. Putin is a politician, so must please lots of different sub-groups of the Russian electorate. He's not perfect by WN standards, but nevertheless he gets a lot right: -- a lot more than any American politician.
---

PRESIDENT VLADIMIR PUTIN said on Thursday Russia would not legalize gay marriage as long as he was in the Kremlin.

“As far as ‘parent number 1’ and ‘parent number 2’ goes, I’ve already spoken publicly about this and I’ll repeat it again: as long as I’m president this will not happen. There will be dad and mum,” Putin said.

During his two decades in power, Putin has closely aligned himself with the Orthodox Church and sought to distance Russia from liberal Western values, including attitudes toward homosexuality and gender fluidity.

He made the comments as he met a state commission to discuss changes to Russia’s constitution.

The commission was set up last month after Putin announced sweeping changes to Russia’s political system that are widely seen as being designed to help him extend his grip on power after his scheduled departure from office in 2024.

Other proposals have since been put forward and Putin was asked to comment on a proposal to add a line in the constitution defining marriage as a union between a man and a woman. “We need only to think in what phrases and where to do this,” he replied.ttps://nationalvanguard.org/2020/02/putin-rejects-gay-marriage-considers-amending-constitution-to-protect-traditional-marriage/
Top
Post Reply
98 posts