By his unwavering support for Tel Aviv regardless of its behavior, John McCain has confirmed that his sympathies lie with those who deceived America to wage a war on behalf of fundamentalists who have long planned to expand the Land of Israel to include Greater Israel.
- Jeff Gates, Guilt by Association: How Deception and Self-Deceit took America to War, 2008 AGENTS OF A FOREIGN STATE - Senator John McCain (R-AZ), Israeli Defense Minister Ehud Barak, Senator Joe Lieberman (D-CT) and Lindsey Graham (R-SC) at their meeting on July 7, 2010, in Jerusalem. Ehud Barak is one of the high-level architects of the 9-11 deception that took America to war in Afghanistan and Iraq. Sen. John McCain (R-AZ) is the most active and outspoken advocate of the Zionist war agenda in the U.S. Congress. Does John McCain work for the international Zionist crime syndicate? Jeff Gates of Tempe, Arizona, is the author of Guilt by Association: How Deception and Self-Deceit took America to War (published before the 2008 election), in which he warned Americans of the treasonous candidate from Arizona. Gates was counsel to the U.S. Senate Committee on Finance (1980-1987).


At a town-hall meeting in July 2010, Jeff Gates asked Sen. John McCain about his involvement with the Zionist criminal syndicate and the oligarch Oleg Deripaska. Gates asked McCain about his 2006 meeting with Deripaska at Davos. McCain recalled the meeting and added that it been with a Rothschild. When Gates asked about the second meeting with Deripaska in 2006 at the Rothschild family fiefdom on the coast of Montenegro, he unfortunately confused Montevideo for Montenegro, which allowed McCain to avoid the question by saying he has never been to Montevideo.

Sen. John McCain is the most active supporter of the Zionist war agenda in the U.S. Congress. In his 2008 book Guilt by Association, Jeff Gates pointed out the McCain family's ties to the cover-up of the murderous Israeli attack on the U.S.S. Liberty in 1967 and other treasonous and criminal activity by the senator from Arizona, who was then the Republican party's candidate for president. To understand why Sen. McCain puts his support for the Zionist crime syndicate ahead of what's best for the American people it is essential to understand who supports John McCain. The following paragraphs from Guilt by Association make that quite clear:


Though campaigning for president on his national security credentials, McCain has misdiagnosed issues of profound consequence not only to ordinary Russians but also to Americans systematically defrauded by the same transnational syndicate. With regularity, the candidate has favored those complicit in the criminal network chronicled in this account [i.e. Guilt by Association]…

According to The Washington Post, McCain campaign manager Rick Davis twice arranged for the candidate to meet with Oleg Deripaska whose links to organized crime are sufficiently compelling that a visa to visit the U.S. was revoked in July 2006. Their first encounter was arranged at the annual World Economic Forum in Davos, Switzerland, in January 2006. They met again in Montenegro seven months later during an official U.S. Senate trip to that eastern European country.

Fields within Fields. On March 20, 2008, after John McCain secured the Republican nomination for president, Nathan Rothschild and his father, Lord Jacob Rothschild, sponsored a fundraiser for McCain in London. A principal adviser to Oleg Deripaska, Nathaniel is a descendent of Nathan Mayer Rothschild who helped finance Britain’s victory over Napoleon at Waterloo. In addition to providing financial advice to the Russian oligarch on the aluminum giant Rusal, Nathaniel Rothschild also advises Indian steel magnates. 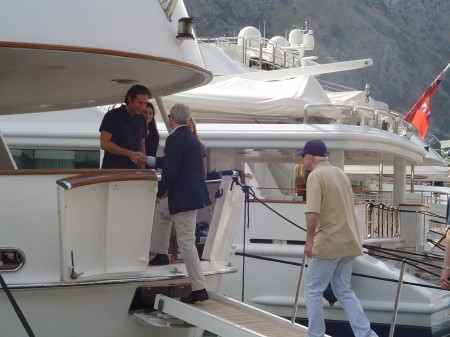 CRUISING WITH CRIMINALS - Rick Davis and Sen. John McCain (in cap) board the rented yacht of Italian con man Raffaello Follieri in August 2006 in Kotor Bay, the Rothschild fiefdom in Montenegro. Follieri, then boyfriend of Anne Hathaway, went on to serve a five year federal jail term in the U.S. It was during this trip that McCain met again with Oleg Deripaska and Nathan Rothschild.

Re: John McCain and the Zionist Crime Syndicate

One woman is standing up to them:
https://mccollum.house.gov/media/press- ... hate-group

As a Member of Congress and the vice-chair of the House Defense Appropriations Subcommittee, I believe defending human rights and freedom are foundational to our national security and our democracy. But the struggle to advance human rights and promote human dignity inevitably results in confronting entrenched forces determined to dehumanize, debase, and demonize individuals or entire populations to maintain dominance and an unjust status quo. Hate is used as a weapon to incite and silence dissent. Unfortunately, this is my recent experience with AIPAC – the American Israel Public Affairs Committee.

The decision by AIPAC to use my image in paid Facebook ads weaponizing anti-Semitism to incite followers by attacking me, my colleagues, and my work promoting human rights for Palestinian children detained in Israeli military prisons is hate speech. But it doesn’t end there. According to the Jewish Telegraphic Agency, an AIPAC petition linked to their ads designed to mobilize supporters stated, “It’s critical that we protect our Israeli allies especially as they face threats from Iran, Hamas, Hezbollah, ISIS and – maybe more sinister – right here in the U.S. Congress.”

This is not a call to action, it is incitement.

AIPAC wants its followers to believe that my bill, H.R. 2407, to protect Palestinian children from being interrogated, abused, and even tortured in Israeli military prisons is a threat more sinister than ISIS. This is not empty political rhetoric. It is hate speech.

AIPAC’s language is intended to demonize, not elevate a policy debate. Vile attacks such as this may be commonplace in the Trump era, but they should never be normalized. Hate speech is intentionally destructive and dehumanizing, which is why it is used as a weapon by groups with a stake in profiting from oppression.

I will not back down from my commitment to peace, justice, equality, and human rights for Palestinians and Israelis. I want Jews, Muslims, Christians, and all people to be safe, secure, and able to find hope and opportunity – in the U.S., in Israel, and in Palestine.

AIPAC claims to be a bipartisan organization, but its use of hate speech actually makes it a hate group. By weaponizing anti-Semitism and hate to silence debate, AIPAC is taunting Democrats and mocking our core values. I hope Democrats understand what is at stake and take a stand because working to advance peace, human rights, and justice is not sinister – it is righteous.

While I normally do not care if Jews are ethnically cleansing/torturing other Semites within its territory in the middle east, funding it with tax money sent to Washington DC is another matter. As has happened to other congress critters that have stuck up for the brutal treatment of Palestinians and other foul activities by the Israelis, such as former Rep. Paul Findlay, expect this representative to find herself in the crosshairs of these unregistered foreign agents that interfere in too many American elections at election time.
Contact me via PM to obtain quantities of the "Send Them Back" stickers. Also available are the "NA Health Warning #1" stickers, and any fliers listed in the Alliance website's flier webpage.
Top
Post Reply
2 posts • Page 1 of 1