March 2020 White activism in the news

Re: White activism at Fullerton CA in the news


How many cases have been prosecuted by California "authorities" involving non-White gang graffiti and publicized like this?
[/quote]

My question is how many times is free speech activity being prosecuted in California. I guess they no longer have the first amendment in Commiefornia.
Top

White activism at Raleigh NC in the news

The LGBT Center of Raleigh has filed a police report after anti-LGBTQ stickers were used to deface the doors to their center.

“It’s about the message…It’s about the fact that they’re spreading a message of hatred,” Lindsey Lughes, Executive Director of the LGBT Center of Raleigh, told ABC 11. “All of that has been wildly, over and over again debunked.”

One sticker claims that gay people are 1-2% of the population. It also claims they represent “67% of HIV diagnoses, 1/3rd of child molesters, 60% of syphilis infections, [and] 52% are non-monogamous.”

There is no evidence that these statistics are remotely accurate, and they are made by the anonymous white supremacist group Hundred Handers. Local investigators could not find any information on the group’s operation.

Another of the group’s stickers mocks the community by saying “LGBT+…so oppressed they enjoy global corporate sponsorship while being celebrated…” and also claiming they “push their agenda on our children.”

“They’re spreading inaccurate things. It’s about the fact that this has a real impact on the LGBTQ+ people who see them,” Lughes said.

The center claims this is at least the second time their center has been desecrated. They attribute the attacks due to their new Drag Queen Story Hour program, a monthly reading program which started in June.

The program has reportedly seen more and more protests since January. “It’s disappointing to me that these kids can’t just go to a story hour and just enjoy it without having to walk past a bunch of people,” program organizer Elise Chenoweth said in an interview. She explains that the center’s volunteers have to protect the children from the protesters at these events now.

That includes more than two dozen at the last event.

“We choose not to engage any of the protesters…we just turn our back to them and put positivity on our faces,” Chenoweth said.

“Our hope is always that, of course, it stays to stickers and words,” Lughes said. “We take safety precautions here at the center, of course, to make sure that we’re prepared if it ever, if anybody ever were to try to escalate any of these things…”

Raleigh Police pledge to investigate, and claim they will set up a meeting with LGBTQ community members and the police chief to address the incident.

Hundred Handers stickers are found from as far as the United Kingdom to Spain and Italy. They take their name from Greek mythology – the ‘hundred-handed ones’ were the children of titans Uranus and Gaea. All three were gigantic and superhuman, and had one hundred hands and fifty heads. They recruit through social media and QR codes on their stickers.

Last July, New York governor Andrew Cuomo launched an investigation into the organization after their stickers were found in the city of Troy, claiming that “multiculturalism kills” and “You are white. Strike back.”

Watch the video below for more on the local reporting of the incident:

Well, if the queers would leave the kids alone they wouldn't have protestors and stickers being posted. Personally, they ought to be run out of town, but it appears Raleigh is yet another overcivilized city sunk in degeneracy.
Contact me via PM to obtain quantities of the "Send Them Back" stickers. Also available are the "NA Health Warning #1" stickers, and any fliers listed in the Alliance website's flier webpage.
Top

Re: White activism at Raleigh NC in the news

The LGBT Center of Raleigh has filed a police report after anti-LGBTQ stickers were used to deface the doors to their center.

“It’s about the message…It’s about the fact that they’re spreading a message of hatred,” Lindsey Lughes, Executive Director of the LGBT Center of Raleigh, told ABC 11. “All of that has been wildly, over and over again debunked.”...
---

I take it these anonymous "White supremacist" stickers were placed on the LGBT freaks' door in Raleigh, NC, where I grew up. Tsk, tsk!

Raleigh was a nice city back then. The races were segregated and there was never any mention whatsoever of queers; the concept of transexuals was unknown. Raleigh is now "progressive," If this is progress, I'm glad I left my hometown years ago, before this sea change in normalcy took over. 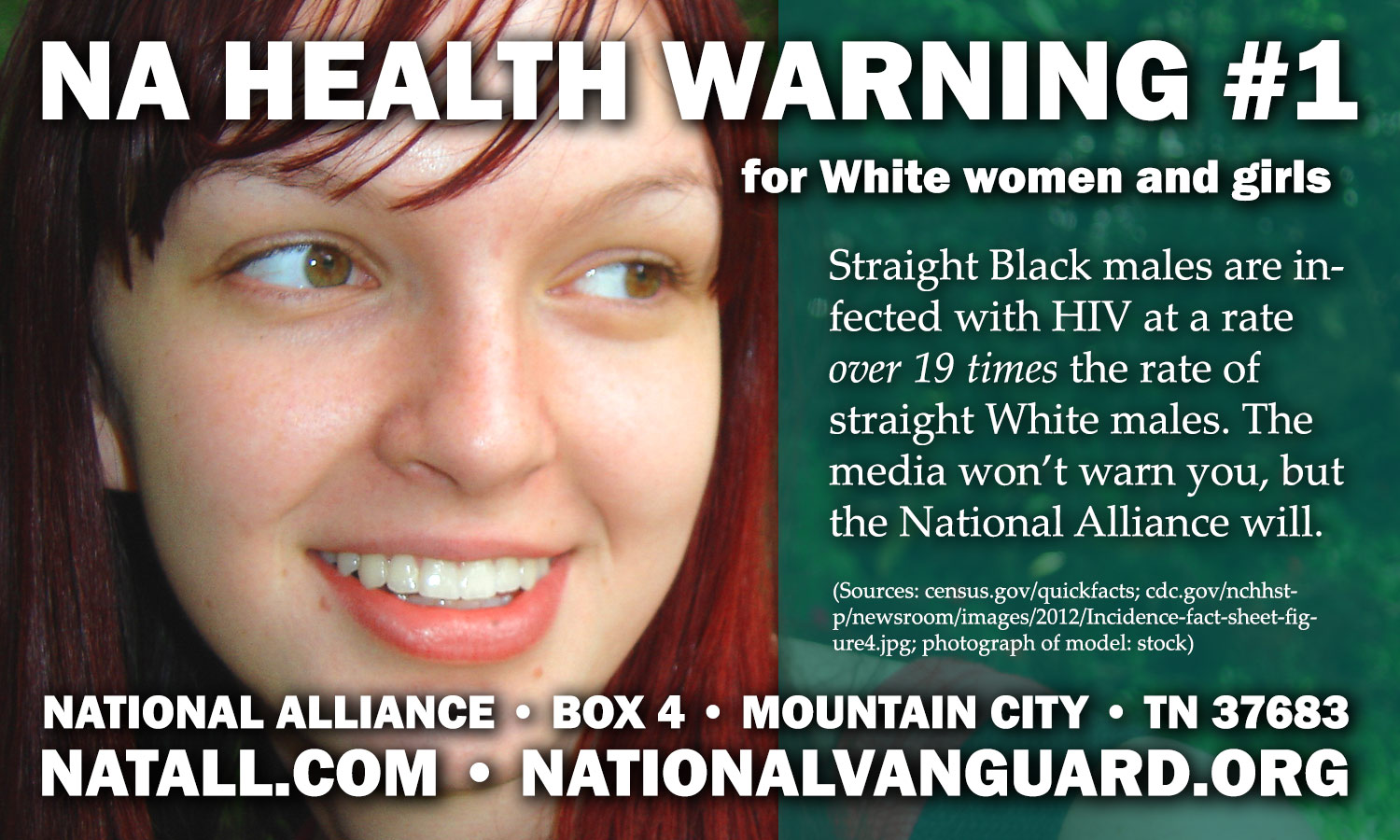 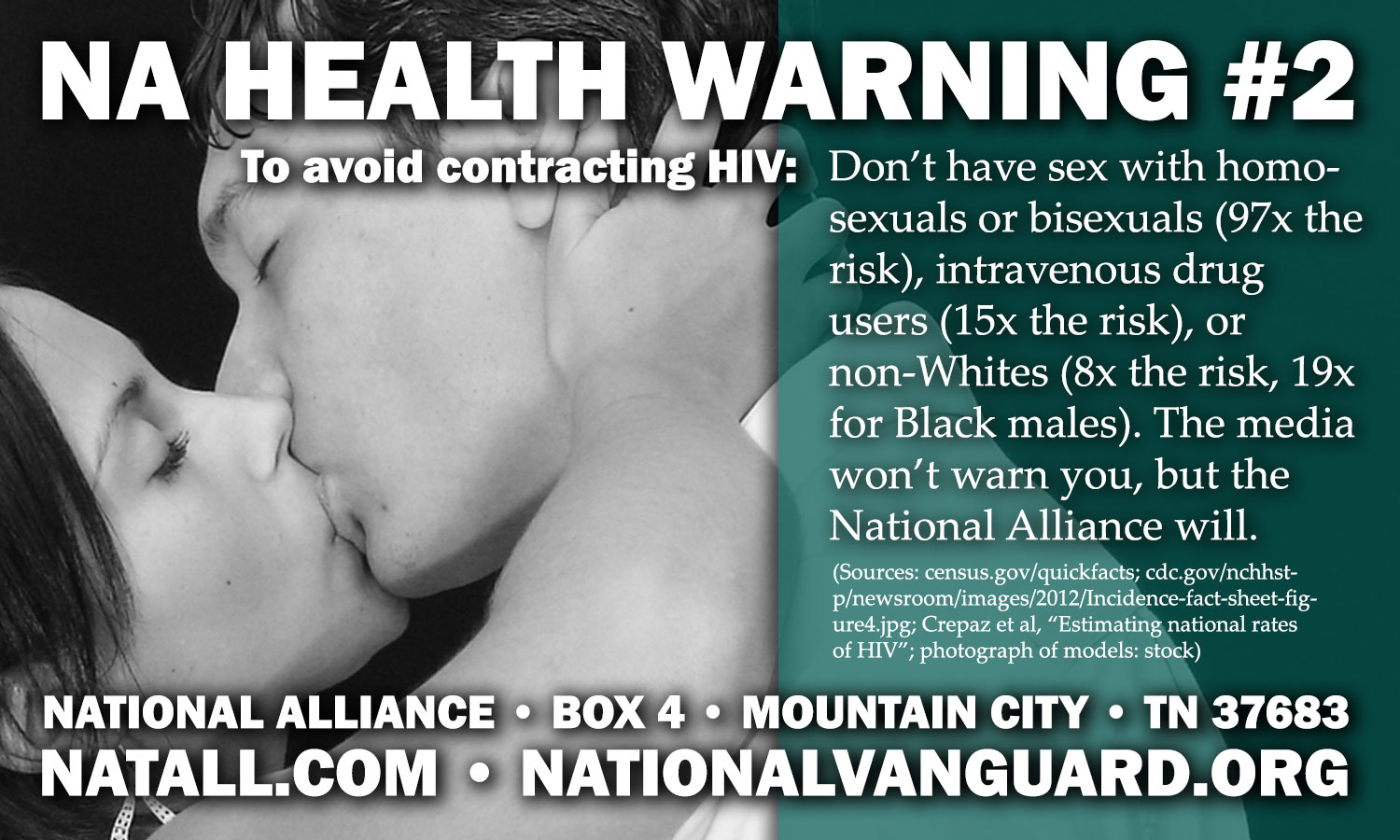 Debunk these statistics, Lindsey-poo!. Take your grievance up with the "supremacist" federal Center for Disease Control (CDC) that supplied the statistics: https://www.cdc.gov/hiv/statistics/index.html