January 2020 White activism in the news

Re: White activism at Bristol UK in the news

They appeared overnight
28 January 2020
Amy Bretherton
[...]
"It's okay to be white" posters were discovered around Bristol campus this morning... Ben, a fourth year French and Spanish student, told The Bristol Tab: "The posters are disgusting....

So, I gather from this earth-shattering news report that Ben and Miss Amy must think that being White is not OK." That's funny.

Ben and Amy must not be White. 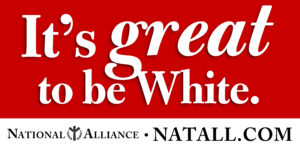 White activism at Beacon NY in the news

Posters promoting Patriot Front, a white nationalist group, appeared in and near Beacon last week with slogans such as “Not Stolen. Conquered” and “Reclaim America.” Propaganda from the group, which is based in Texas, also showed up in Brooklyn earlier in the month.

In October 2018, posters promoting The Daily Stormer, a neo-Nazi website, were posted on two churches in Beacon.

The Southern Poverty Law Center, which tracks extremist groups, has documented more than 1,000 posters and banners hung by hate groups across the country since January 2018 and says members of Patriot Front and another white supremacist group, Identity Evropa, are responsible for most of them.

From 2014 to 2018, law-enforcement officials in Dutchess County reported 19 hate-crime incidents to state officials. Data for 2019 has not yet been released.

Ok, so why is free speech posters being equated with "19 hate-crime incidents" in this article?

Comments are available at the website.
Contact me via PM to obtain quantities of the "Send Them Back" stickers. Also available are the "NA Health Warning #1" stickers, and any fliers listed in the Alliance website's flier webpage.
Top

White activism at Peterborough ON in the news

A Peterborough Police investigation into the plastering of a white nationalist group's posters in downtown Peterborough has determined that the "posters do not meet the threshold to be deemed a hate crime."

It's got queers and other White haters in a tizzy
Peterborough poster.jpg (68.92 KiB) Viewed 1706 times

ID Canada is an identarianist group that seeks to protect Canada's "identity" from migration and considers "diversity is in fact our greatest weakness."

City police announced Thursday afternoon that while the posters are not a hate crime, people that see "potentially concerning content being posted" are urged to call city police immediately at 705-876-1122 or Crime Stoppers anonymously at 1-800-222-8477 or online at stopcrimehere.ca.

"Do not assume police are aware of it or assume someone else has reported it," a release from city police stated.

In 2017, city police officers began handing out NoH8 cards which explain what a hate crime or hate incident is and what to do if a person is a victim or witness to a hate incident, with phone numbers of various agencies.

The NoH8 cards are available in the lobby of the police station on Water Street.

"We will continue to work with our community partners to ensure our community is a place where all residents feel safe and welcome," the city police release stated.

Some of the posters spotted this week say Defend the Family — a sentiment that Rick Lambert of the Rainbow Service Organization called "narrow and distorted."

Families in Peterborough and in Canada are "varied," he said, and the poster's message "runs contrary to our constitutional rights and freedoms."

"We need to work together to respect, value and welcome that diversity and challenge and denounce those who want to do otherwise," Lambert wrote in an email.

A spokesman for PFLAG Canada, which has a chapter in Peterborough, stated this week that the posters "in no way define Peterborough."

"The community should be recognized for celebrating its differences," wrote Omid Razavi, communications director for PLFAG Canada, in an email.

When the posters first went up, Mayor Diane Therrien told The Examiner that "hateful views are not acceptable."

"We need more to be done beyond just removing these posters," Magumbe said.

Meanwhile the city's public works department removed racist graffiti on the Otonabee River footbridge behind the Holiday Inn Waterfront last week after The Examiner reported it had been sprayed on the bridge.

Hmm....Canadian queers believe that "Defend the family" is a narrow and distorted sentiment. Perhaps that's due to their perspectives being rather distorted.
Contact me via PM to obtain quantities of the "Send Them Back" stickers. Also available are the "NA Health Warning #1" stickers, and any fliers listed in the Alliance website's flier webpage.
Top

White activism at Colne UK in the news

Displaying the message 'It's okay to be white' in block capitals, the posters were found in both Alkincoats Park in Colne and near Nelson Town Centre. With roots in the neo-Nazi movement, the 'It's Okay To Be White' message originated on the website 4chan and has in the past been widely used by white supremacists on internet message boards and social media.

The phrase has previously been shared by the likes of infamous US right-wing Fox News host Tucker Carlson and racist groups including neo-Nazis, white supremacists, the former Ku Klux Klan Grand Wizard David Duke, and The Daily Stormer, an alt-right website which supports Holocaust denial and advocates for the genocide of Jews.

Intending to "trigger" people into criticising the superficially inoffensive message in order to whip up a populist feeling of persecution of white people, the posters have been condemned by Colne Town Council.

"As soon as Colne Town Council were made aware of this inappropriate poster being displayed in Alkincoates Park, arrangements were made for it to removed immediately," read a statement. "Colne Town Council has a zero-tolerance policy towards any racially-offensive material and will remove such posters should the perpetrator continue to act in such an improper manner."

Thought Policing is such an important part of British life these days that people actually elect politicians to spend their time doing so. But it appears some have a bit of buyer's remorse....

While we in the National Alliance have little use for such milquetoast messaging, it's still good that there are brave Whites out and about who simply will not knuckle under to thought control and get a White message out for all to see.
Contact me via PM to obtain quantities of the "Send Them Back" stickers. Also available are the "NA Health Warning #1" stickers, and any fliers listed in the Alliance website's flier webpage.
Top

White activism at Bad Bigra Germany in the news

Getting the message out there in fluid liters
Delicious beer.jpg (24.96 KiB) Viewed 1408 times

German police are investigating the sale of beer with a Nazi-style label, seen as scandalous in Germany as the world remembers Holocaust victims.

Photos of the "German Reich Brewery" beer were posted on Facebook by Götz Ulrich, a district chief in eastern Germany, who expressed outrage.

"I feel so ashamed," he said, accusing neo-Nazis of staging a provocation exactly 75 years after Soviet troops liberated the Auschwitz death camp.

Nazi symbols are banned in Germany.

Their use is illegal if there is a clear link to Nazi or other far-right ideology. In some cultural contexts, however, their use is tolerated.

Commemorations are being held at the site of Auschwitz-Birkenau in southern Poland, where Nazi Germany murdered about 1.1 million people - nearly a million of them Jews.

Mr Ulrich said the Deutsches Reichsbräu beer was being sold on Friday in Bad Bibra, his home town, and "the worst thing is that the beer has been flying off the shelves and is sold out!"

The label is brown - reminiscent of the Nazis' brown uniforms - and the Nazi eagle symbol is reproduced, except that the Iron Cross is shown inside a wreath, instead of a swastika.

The Gothic script lettering - harking back to German tradition - is also standard for neo-Nazi propaganda.

The shop selling the beer was part of the retail chain Getränke-Quelle, but the chain has now distanced itself from the sale, saying it was an independent franchisee's decision. Getränke-Quelle told the local manager to withdraw the beer and said it would remove its branding from the shop.

German media report that the beer first went on sale earlier this month via the internet, advertised by Tommy Frenck, a known neo-Nazi activist. He runs a pub near Themar, a small town south-west of Jena, and Themar is the venue for an annual neo-Nazi festival.

German media note that neo-Nazi "code" numbers were used for the price of a crate of Deutsches Reichsbräu: €18.88.

Neo-Nazis find the number 18 significant: they treat the first and eighth letters of the alphabet, AH, as code for Adolf Hitler. And 88, for them, stands for "Heil Hitler".

German law does not ban use of the Reich eagle or Iron Cross if they are not combined with a swastika and if there is no obvious neo-Nazi connection.

The beer was on sale in one town in Saxony-Anhalt state where, as in neighbouring Saxony state, far-right extremist groups are especially active.

For those interested in spreading a message using creative methods, this one satisfies a thirst!
Contact me via PM to obtain quantities of the "Send Them Back" stickers. Also available are the "NA Health Warning #1" stickers, and any fliers listed in the Alliance website's flier webpage.
Top
Post Reply
35 posts