Re: NA Chairman is Guest on Communist Radio Show

Jim Mathias wrote:Will, you mentioned not having the right response at the ready when you need it. Perhaps bringing some brief notes prepared beforehand to use when responding on a variety of "gotcha" questions that could be aimed at you be kept handy for such an event.

Perhaps. I don't need notes to deal with The Hutchinson Report antis. The fool who controls the mic allowed me to read "WHY IS IT important to study and understand the Jewish question?" and he and his crew seemed to me to be back on their heels and defensive with me after that. Maybe not?

I heard the show once yesterday and was interrupted through some of it, so will give it another listen. I recall being bombarded with demands to provide "documentation, not hearsay" by the glib Negro host with the anti-White agenda who, below the surface, is hostile and determined to not allow his "neo-Nazi/White supremist [sic]/Klucker" guest to explain himself. WW1 remembers that I was being told to provide documentation about Jew control of media. Any diligent listener to yesterday's Hutchinson Report -- which it is doubtful there are very many who heard it live -- who is still uninformed about Jewish control of mass media now knows how to find documentation of that at nv.org and natall.com. I wasn't speaking to pinko Negro's audience, I was speaking to ours who may hear the show in our enemy's archive and become a little more emboldened by it.

* * * * *
[L'esprit d''escalier is a French term used in English for the predicament of thinking of the perfect reply too late, taught to me by the late Joe Pryce when we were working together on The Land 25 years ago] Thinking of a perfect reply to something after it's too late is something we all experience. "Walking up the staircase backwards" in French is the expression that describes the phenomenon and I never forgot Joe's teaching point. He was an intellectually honest genius and teacher of the top rank who allowed me to pick his mind, like WLP did. It's a White thing. Perhaps someone reading this will now also remember l'esprit d''escalie, and repeat it to others long after I'm gone.

To further digress, this explanation of the origin of this subtle French phrase from Wikipedia:
---
This name for the phenomenon comes from French encyclopedist and philosopher Denis Diderot's description of such a situation in his Paradoxe sur le comédien[.[1] During a dinner at the home of statesman Jacques Necker, a remark was made to Diderot which left him speechless at the time, because, he explains, "l’homme sensible, comme moi, tout entier à ce qu’on lui objecte, perd la tête et ne se retrouve qu’au bas de l’escalier" ("a sensitive man, such as myself, overwhelmed by the argument levelled against him, becomes confused and can only think clearly again [when he finds himself] at the bottom of the stairs").

In this case, “the bottom of the stairs” refers to the architecture of the kind of hôtel particulier or mansion to which Diderot had been invited. In such houses, the reception rooms were on the étage noble, one floor above the ground floor.[2] To have reached the bottom of the stairs means to have definitively left the gathering.
---
Top

Re: NA Chairman is Guest on Communist Radio Show

It seems appropriate to bump this 3-year-old topic now that I just learned this current news from my old hometown, Raleigh:
---

Police have since removed the statue from the light pole and the front of the Wake County courthouse.

Earlier in the evening, after marching in celebration of Juneteeth, demonstrators threw yellow ropes around two of the statues on the 75-foot tall Confederate monument on the ground of the North Carolina State Capitol. The demonstrators then pulled on the ropes--one of the statues swaying--but neither figure fell.

Police officers then intervened, preventing the demonstrators from completely pulling the statue down before leaving the site. State Public Safety officials said law enforcement was ordered to stand down by State Capitol Police Chief Hawley after several officers were injured in the initial engagement.

"After the initial attempt to remove the statue was prevented and deescalated by law enforcement, Chief Hawley says officers did remain on the grounds to continue maintaining public safety. In the initial engagement, several officers received injuries," NC Department of Public Safety officials said. 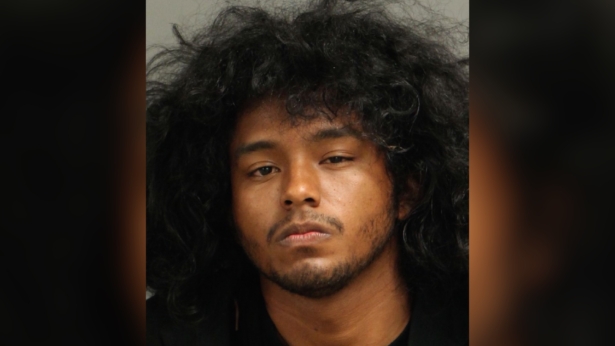 Conrad Paul James, 27, has been charged with inciting a riot—a felony in North Carolina—first-degree
trespass, resisting an officer, and injury to personal property, according to a news release from the
North Carolina Department of Public Safety.

On a second attempt, demonstrators returned to the monument and successfully removed both statues before dragging them down W. Hargett Street. One Confederate statue is now hanging from a light post along W. Hargett Street and another on the steps of the Wake County courthouse...