Kipling was a fascinating figure. I discovered his poetry at a relatively young age. It really grew on me as I was getting older and understood more and more of it.
Top

A poem by renowned 19th century writer Rudyard Kipling has been scrubbed off the walls of a university student union amid claims his literature “dehumanised people of colour” and that he was an apologist for British colonialism.
Students, who claimed the poem went against what their union stood for, replaced Kipling’s ‘If’ with US civil rights activist Maya Angelou’s ‘Still I Rise’ at Manchester University’s student union. 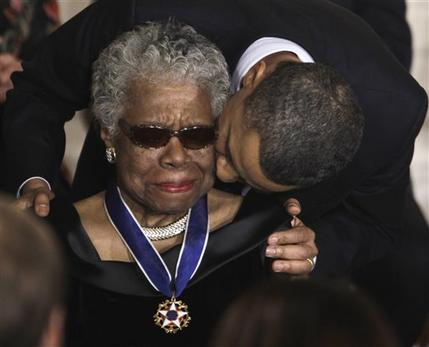 Barack Obama's Negro Poet Laureat Maya Angelo
Kipling’s poem was put up as part of the union’s refurbishment, but Sara Khan, the liberation and access officer, said students should have been consulted beforehand.

“We, as an exec team, believe that Kipling stands for the opposite of liberation, empowerment, and human rights – the things that we, as an SU [student union], stand for,” Khan wrote in a Facebook post.
“Well-known as author of the racist poem ‘The White Man’s Burden’, and a plethora of other work that sought to legitimate the British Empire’s presence in India and dehumanise people of colour, it is deeply inappropriate to promote the work of Kipling in our SU, which is named after prominent South African anti-Apartheid activist, Steve Biko.

Britain is not racist, Meghan Markle proves it’ - argues white, Etonian, neocon Douglas Murray
“As a statement on the reclamation of history by those who have been oppressed by the likes of Kipling for so many centuries, and continue to be to this day, we replaced his words with those of the legendary Maya Angelou, a black female poet and civil rights activist.”

Manchester University declined to comment saying it was a matter concerning the SU.

A spokesman for Manchester's SU said, according to the Telegraph: "We understand that we made a mistake in our approach to a recent piece of artwork by failing to garner student opinion at the start of a new project. We accept that the result was inappropriate and for that we apologize."

Kipling was popular at the beginning of the 1900s for his children’s literature and short stories, becoming the youngest recipient of the Nobel Prize for Literature in 1907.

His reputation was later mired, however, by claims his literature had racist overtones, with ‘1984’ author George Orwell branding him “morally insensitive" and a “prophet of British imperialism”.
---

Those who have a copy of The Best of Attack! and National Vanguard may recall seeing this there:

"Song of the Fifth River"


WHERE first by Eden Tree
The Four Great Rivers ran,
To each was appointed a Man
Her Prince and Ruler to be.

But after this was ordained
(The ancient legends' tell),
There came dark Israel,
For whom no River remained.

Then He Whom the Rivers obey
Said to him: "Fling on the ground
A handful of yellow clay,
And a Fifth Great River shall run,
Mightier than these Four,
In secret the Earth around;
And Her secret evermore,
Shall be shown to thee and thy Race."

So it was said and done.
And, deep in the veins of Earth,
And, fed by a thousand springs
That comfort the market-place,
Or sap the power of King,
The Fifth Great River had birth,
Even as it was foretold -
The Secret River of Gold!

And Israel laid down
His sceptre and his crown,
To brood on that River bank
Where the waters flashed and sank
And burrowed in earth and fell
And bided a season below,
For reason that none might know,
Save only Israel.

He is Lord of the Last -
The Fifth, most wonderful, Flood.
He hears Her thunder past
And Her Song is in his blood.
He can foresay: "She will fall,"
For he knows which fountain dries
Behind which desert-belt
A thousand leagues to the South.
He can foresay: "She will rise."
He knows what far snows melt
Along what mountain-wall
A thousand leagues to the North,
He snuffs the coming drouth
As he snuffs the coming rain,
He knows what each will bring forth,
And turns it to his gain.

A Ruler without a Throne,
A Prince without a Sword,
Israel follows his quest.
In every land a guest,
Of many lands a lord,
In no land King is he.
But the Fifth Great River keeps
The secret of Her deeps
For Israel alone,
As it was ordered to be.
Contact me via PM to obtain quantities of the "Send Them Back" stickers. Also available are the "NA Health Warning #1" stickers, and any fliers listed in the Alliance website's flier webpage.
Top
Post Reply
13 posts

Return to “Art and Music”